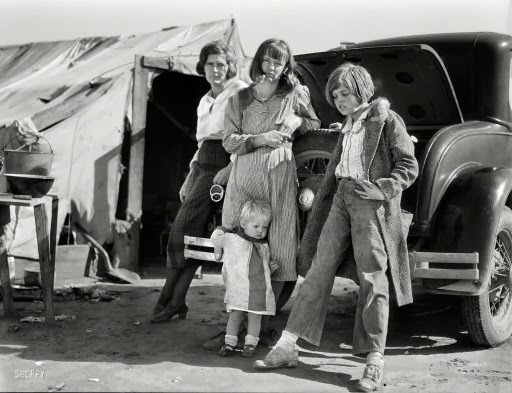 “Dust Bowl drought refugees in California”We can read these days that Spain has come out of its recession. The Bank of Spain reported last week that GDP expanded by 0.1% in Q3. But in a country with 26% unemployment and 55% youth unemployment, such statements are devoid of any real meaning. They’re mere technicality niceties. Because if anything screams recession, it’s those kinds of unemployment numbers. Moreover, where do you think that 0.1%, even it you would take it seriously, came from? It’s really not that hard. Spain’s return to growth is due to a 15% fall in labour costs since the 2008 financial crisis. In other words: the rich side of the economy gets to look good at the expense of the poor side. A global phenomenon.

And economists then get to spin that as the end of a recession. That sort of spin, generated first and foremost by a government’s own spindoctors and spread by its financial media, is not only meaningless gibberish, what makes it worse is that it’s demeaning for those who pay the price for it. Who either lost their jobs altogether or saw 15% or more cut from their often low pay. Who have suffered through multiple years of austerity in the form of higher taxes, severely cut services and diminished savings and often lost their homes too. And who, now they’re at the bottom of the gutter, see their leaders boast the success of the policies that put them there.

After more than two years of grinding recession and the destruction of 3.8 million jobs, Spain has returned to growth. But the improvement was so weak that the jobless rate is not expected to fall to pre-recession levels for many years.

The Bank of Spain reported Wednesday that gross domestic product expanded by 0.1% in third quarter. In the previous quarter, GDP shrank by the same amount. Still, the improvement delivered a psychological boost to the centre-right government of Prime Minister Mariano Rajoy, who has been under enormous pressure to provide evidence that austerity programs and the sacrifices that go with them are not the route to eternal recession.

Spain’s recovery is all the more fragile because its banks, which received a €40 billion ($57.3 billion) European bailout early this year, are sitting on enormous quantities of dud loans. AFI, a financial and economics consultancy in Madrid, said in a note last week that the non-performing loan rate had edged up to 12.1% of loan portfolios in August. [..]

Spain’s return to growth was in good part due to an export surge fuelled by a sharp fall in labour costs since the 2008 financial crisis. AFI said that unit labour costs are down 15% …

Note the mention of Spain’s banks“sitting on enormous quantities of dud loans“. Makes you wonder what it takes to get rid of those, doesn’t it, after all the tens of billions of euros already handed to these banks. Well, it’s not just Spain: the German edition of Der Spiegel quotes an Ernst&Young report as saying Europe’s banks sit on a record amount in bad loans (my translation).

Consulting firm Ernst & Young says banks in the eurozone have amassed €940 billion in bad credit, but are still set to make higher profits this year.

7.8% of all loans are predicted to be either late, or not paid back at all, Ernst&Young claim in their “Eurozone Financial Services Forecast”. That adds up to €940 billion, or €120 billion more than in 2012, and the highest amount in bad loans ever.

Throughout Europe, the number of bank clients who can no longer service their debt has clearly gone up. Most bad loans are in Spain (12%) and Italy (11.5%).

In the US, the Fed once again has delayed shrinking its $85 billion a month QE purchases. The reason given is that the economy is “still too weak”. But, unless everyone at the Fed is very blind, awfully deaf and extremely dumb, QE can never have been aimed at boosting the economy; it was always, just like all the games played with accounting standards, meant to bolster the “outlook” of the major, too big to fail (but failing nevertheless), financial institutions.

And now we know it’s an ongoing affair. Something that is put in a very eery light by a report coming from JPMorgan Chase’s Nikolaos Panigirtzoglou, which describes the “Most Extreme Ever Excess Liquidity” bubble. After all, why throw more QE billions at the too big to fail banks when they’re already drowning in the stuff? That can mean only one thing, I must assume, in the eyes of the Fed: that these banks are in a much worse state than anyone lets on. The point of view of the banks themselves, of course, is that they’re not going to refuse free money handed on a platter, whether they need it or not.

But what does it mean when we see the records in credit gone sour in Europe, and at the same time “Most Extreme Ever Excess Liquidity” in the global economy? Why is that liquidity not used to restructure those bad loans? Again, the only reasonable answer seems to be that banks are in much worse shape than we are led to believe.

JP Morgan sees ‘most extreme excess’ of global liquidity ever

If you think there is far too much money sloshing through the global financial system and causing unstable asset booms, you are not alone.

A new report by JP Morgan says the bank’s measure of excess global money supply has reached an all-time high. “The current episode of excess liquidity, which began in May 2012, appears to have been the most extreme ever in terms of its magnitude,” said the report, written by Nikolaos Panigirtzoglu and Matthew Lehmann from the bank’s global asset allocation team.

They said the latest surge is far beyond anything seen in the last three episodes of excess liquidity: 1993-1995, 2001-2006, and during the Lehman emergency response from October 2008 to September 2010, all of which set off a blistering rise in asset prices.

Which is why the Fed has pledged to keep it coming ….

They argue that the global M2 money supply has risen by $3 trillion this year, up 4.6% in just nine months to $66 trillion. Roughly $1 trillion is showing up in the G4 bloc of the US, eurozone, Japan, and the UK.

The lion’s share, some $2 trillion, is showing up in emerging markets where credit continued to surge at $170 billion a month in July and August despite the Fed Taper scare earlier that hit the Fragile Five (Brazil, India, Indonesia, South Africa, and Turkey). Mr Panigirtzoglu said there is an internal credit boom in emerging markets that is running in parallel to QE in the West. [..]

JP Morgan measures “broad liquidity” held by firms, pension funds, households (etc) as well as banks. They say correctly (a crucial point often missed) that QE bond purchases from banks do not necessarily boost the broad money supply. You have to buy outside the banks.

In very crude terms, excess liquidity is the gap between “money demand and money supply”. When confidence returns, demand for money falls, so it finds a home elsewhere in stocks, property, and such.

If JP Morgan is right, you can see why the BIS, the IMF, and Fed hawks are biting their fingernails worrying about the next train wreck. There is clearly a huge problem with the way QE has been conducted.

Turns out, we have yet another moniker to remember thanks to Ambrose: the Fragile Five. Oh, well, one more or less … By the way, did you see that S&P declared Greece an emerging market? Can it still be a PIIG now?

JPM’s Nikolaos Panigirtzoglou, editor of the “Flows and Liquidity” weekly research piece, is one of the greater experts on, not surprisingly, global monetary flows and liquidity. Which as we noted back in 2009, is all that matters in a world in which the micro, and recently the macro, have all been made obsolete by one simple thing: credit-money creation by the monetary authorities.

Excess money supply is currently at record high positive territory. The residual of the regression turned positive in May 2012 and has risen steadily since then. This is both because of real money supply increasing and money demand decreasing due to lower uncertainty (Figure 3). In particular, global M2 is up $3 trillion or 4.6% since the beginning of the year (to September), outperforming the Global CPI inflation index which is up by only 2% since then. Global M2 reached $66 trillion in September this year.

Of the $3 trillion increase in global M2 money supply in the first three quarters of the year, around $1 trillion is due to G4 countries, i.e. US, Euro area, UK and Japan. The remaining $2 trillion is due to Emerging Markets countries, driven by strong bank lending growth in EM. As we highlighted last week, EM bank loan credit creation has been unaffected by the EM selloff in the summer and was running in July/August at a $170 billion per month pace. So strong credit growth in EM economies continues to boost our measure of excess liquidity.

Conclusion: The rise in excess liquidity, i.e. the residual in the model of Figure 4, is supportive for risky assets especially when we compare the past nine months with the period between the end of 2010 and the beginning of 2012 when excess money supply was negative. Looking further back in Figure 4, we can see three major episodes of excess liquidity (i.e. positive residual): 1993-1995, 2001-2006 and Oct 2008-Sep 2010. These were periods of strong asset price inflation suggesting that excess liquidity could have been a factor supporting markets at the time. The current episode of excess liquidity, which began in May 2012, appears to have been the most extreme ever in terms of its magnitude.

• In just the first 9 months of 2013, Developed Markets countries have injected $1 trillion in liquidity sourced exclusively by central banks; EMs have injected another $2 trillion driven by bank loan demand.

• The total global M2 is over $66 trillion, growing at an annualized pace of over 6%.

• The amount of excess liquidity, i.e. the infamous “liquidity bubble” in the global fungible system is “the most extreme ever in terms of its magnitude”

And that’s really all there is to know: the music is playing and everyone has to dance… just don’t ask what happens when the music ends.

I guess the conclusion must indeed be that the banks, certainly in Europe, but just as certainly not only there, after receiving all those trillions of dollars, euros, yen and yuan, are still in terrible shape. There is no trust in the banking sector, there is a temporary faith in central banks injecting liquidity into the banks. That’s what holds our financial system together. And as long as accounting standards, or the lack thereof, allow for banks to not restructure their credit gone sour, and they at the same time receive all the liquidity they need and more, which enables them to prop up assets, nothing will change: they will be in just as bad a shape a year from now, or two.

Unless the music stops playing before that, i.e. one of the central banks no longer sloshes out more excess liquidity, or this liquidity turns on itself. Not an uncommon phenomenon among zombies. Because that of course is what we’re describing here: zombies. The Undead. Halloween.

And it’s not just the banks either. What do you think drives the world stock exchanges to new record highs? How can Spain claim it’s out of its recession when record numbers of its people are unemployed and its banks set new records for bad loans? It’s all zombies all the way down, as far as you can see. And at the bottom there’s you.

Home › Forums › How Can We Have Record Bad Loans And Record Excess Liquidity At The Same Time?