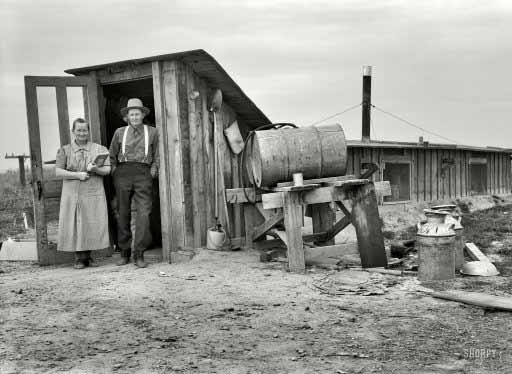 Ilargi: Stoneleigh today, in between speaking engagements, tackles the slowly but surely creeping closer threat of being in debt. We may no longer -or maybe should we say not yet- have debtors’ prisons, but that doesn’t mean that everyone is safe from debt collectors, including state officials who often -illegally- work as such. The Star Tribune recently ran a striking article on the topic, which Stoneleigh addresses. For those who don’t see this as a serious threat, here’s two of today’s headlines: Obama Warns Of ‘Massive Layoffs Of Teachers, Police, And Firefighters’ and Investors are betting on a Black Monday-style collapse, Bank of England warns. The stock markets may suggest recovery, but they are deceptive. to say the least.

Stoneleigh: Trickles, Floods and the Escalating Consequences of Debt

We have often said here at The Automatic Earth that there are many things that -still- function today, but once a trickle becomes a flood, will cease to function. Bank runs are the most obvious example – as soon as more than a handful of people withdraw their deposits, banks close their doors. Those who expect to be bailed out by deposit insurance are in for a nasty surprise, as deposit insurance won’t be worth the paper it’s written on in a systemic banking crisis. It’s all merely a confidence game in the first place – a mechanism to convince you that there’s actually nothing to worry about. If it worked there would never be any bank runs. However, if (when) the bluff is called, it will be game over.

Another problem area will be early pension withdrawals. Pension funds are generally underfunded (or sometimes even unfunded), and they have been trying to make up for the shortfall by chasing yield, without perhaps realizing that this meant they were chasing risk. The insiders who sold the riskiest high-yield ‘investments’ to pension funds called it ‘land-filling toxic waste’. They knew perfectly well that they were crippling the future ability of pension funds to meet their obligations. Many pension fund assets will be worth pennies on the dollar as soon as extend and pretend can no longer be maintained and there is a serious price discovery event.

The structure of the credit default swap market virtually guarantees that such an event will take place in the next phase of the credit crunch. One can insure assets one does not own, which then confers a perverse incentive to burn things down for profit. Even more perversely, the complete lack of capital adequacy regulation in the CDS market means that one may force something to fail but not be able to collect on a ‘winning bet’. The price discovery that could sink many vulnerable ‘assets’ could happen completely in vain.

In short, pension funds are in serious trouble, as we have pointed out many times before. The more people attempt to make early withdrawals, despite the tax penalties, the greater the risk that the lack of funding will become obvious. As a result, we are already seeing moves towards preventing early withdrawals, ostensibly to ‘prevent people from impairing their retirement’. In actual fact such moves are meant to cover up the lack of funding for as long as possible. As with bank runs, the first few to make withdrawals may get their money, but, again, once a trickle becomes a flood, the door will close.

Another such problem area is the consequences of indebtedness. Presently bankruptcy is relatively civilized in comparison with earlier eras, if harder to get than it used to be. Discarded ‘remedies’ for indebtedness have included debtors’ prison, indentured servitude (perhaps inter-generational) and being strong-armed into the military. These are generally no longer in use, although the military option is already regaining a foot-hold. People in the US can often walk away from debt, either through bankruptcy or strategic default on underwater mortgages. As (un-refinanced) mortgages are often non-recourse loans in the US, people can choose to walk away with the only damage being to their credit score. If they buy or rent another property prior to default, the damage can be minimal. However, such a situation is highly unlikely to persist.

Apart from the arguments about trickles and floods, such strategic default is very socially divisive, which means it will be easy to generate a mandate to prevent it in the future, whether or not doing so would violate existing contract terms. Those who expect contract terms to remain inviolate are likely to be very disappointed in many instances. Governments don’t ‘fight fair’. When push comes to shove, they are perfectly capable of changing the rules abruptly, and retro-actively if they perceive it to be necessary. After all, we are already witnessing the demise of the rule of law in many obvious ways. The rule of law exists only when the centre agrees to be bound by the same rules as others, and that is less and less the case all the time.

I think it wise to expect margin calls on a grand scale in the months and years to come. I also expect the less civilized methods of dealing with debt to resurface. In fact, they already are. See for instance this article from the Minnesota-St.Paul Star Tribune:

In Jail for Being in Debt:

It’s not a crime to owe money, and debtors’ prisons were abolished in the United States in the 19th century. But people are routinely being thrown in jail for failing to pay debts. In Minnesota, which has some of the most creditor-friendly laws in the country, the use of arrest warrants against debtors has jumped 60 percent over the past four years, with 845 cases in 2009, a Star Tribune analysis of state court data has found.

Not every warrant results in an arrest, but in Minnesota many debtors spend up to 48 hours in cells with criminals. Consumer attorneys say such arrests are increasing in many states, including Arkansas, Arizona and Washington, driven by a bad economy, high consumer debt and a growing industry that buys bad debts and employs every means available to collect.

Whether a debtor is locked up depends largely on where the person lives, because enforcement is inconsistent from state to state, and even county to county. [..]

How often are debtors arrested across the country? No one can say. No national statistics are kept, and the practice is largely unnoticed outside legal circles. “My suspicion is the debt collection industry does not want the world to know these arrests are happening, because the practice would be widely condemned,” said Robert Hobbs, deputy director of the National Consumer Law Center in Boston.

Debt collectors defend the practice, saying phone calls, letters and legal actions aren’t always enough to get people to pay….. Taxpayers foot the bill for arresting and jailing debtors. In many cases, Minnesota judges set bail at the amount owed. In Minnesota, judges have issued arrest warrants for people who owe as little as $85 — less than half the cost of housing an inmate overnight. Debtors targeted for arrest owed a median of $3,512 in 2009, up from $2,201 five years ago.

Those jailed for debts may be the least able to pay…. The laws allowing for the arrest of someone for an unpaid debt are not new.

What is new is the rise of well-funded, aggressive and centralized collection firms, in many cases run by attorneys, that buy up unpaid debt and use the courts to collect. Three debt buyers — Unifund CCR Partners, Portfolio Recovery Associates Inc. and Debt Equities LLC — accounted for 15 percent of all debt-related arrest warrants issued in Minnesota since 2005, court data show. The debt buyers also file tens of thousands of other collection actions in the state, seeking court orders to make people pay.

The debts — often five or six years old — are purchased from companies like cellphone providers and credit card issuers, and cost a few cents on the dollar. Using automated dialing equipment and teams of lawyers, the debt-buyer firms try to collect the debt, plus interest and fees. A firm aims to collect at least twice what it paid for the debt to cover costs. Anything beyond that is profit….

Stoneleigh: People too often assume that the consequences of debt will remain minimal, even to the point of deliberately maxing themselves out before a default they know is inevitable. This is a very dangerous practice. As the article points out, debts which are at risk of non-payment are often sold on to those lower down the financial foodchain, who reckon they have enough of a chance of collecting to justify the amount they pay to buy the debt from the original issuer.

If they have paid very little, they do not need to actually collect on many debts to make a profit overall. Debts can be sold on multiple times, to operators prepared to use harder and harder tactics, until the debt can end up in the hands of ‘Vinny the Knee-Capper’, or equivalent. Long before that people can suffer a multitude of lesser consequences, beginning with harassment and moving on to jail. It doesn’t appear to matter that debt is not a criminal matter. Expect existing authority to be abused, left, right and centre. This is the way much of the world lives already, in fear of corrupt authority or authority exercised on behalf of powerful vested interests, even if it constitutes a clear violation of legal principles.

We are seeing the early stages of the return of debtors’ prisons and other less palatable consequences. Debtors beware.

Home › Forums › Trickles, Floods and the Escalating Consequences of Debt