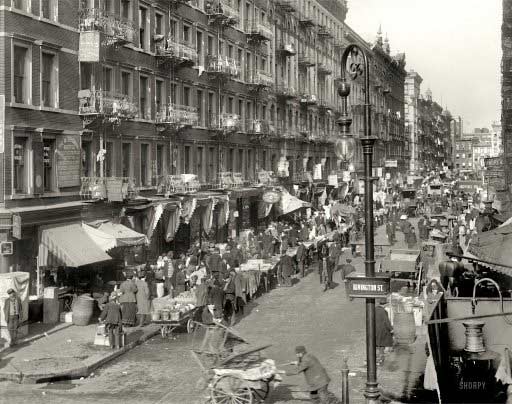 Detroit Publishing Co. In The Ghetto 1909 “The ghetto, Lower East Side, New York”

In the 1990s, speleologists discovered an etching made by a single human being in the Chauvet Cave of Southern France over 30,000 years ago (no, the four zeroes following the “3” are not typos). A street artist is most broadly and best described as someone who makes visual representations on surfaces or in places that do not “belong” to the artist. Using that definition, the person who created this etching on the wall of a natural cave is by far the earliest street artist that we are aware of.

This person was most likely a part of a hunter-gatherer tribe that devoted 100% of its members to a few specialized functions – hunting animals, gathering fruits, vegetables, building materials, etc., preparing food and water, fashioning some basic tools from wood, bone and stones and constructing very temporary shelters. Divisions of labor for specialized functions within a society are a good measure of how “complex” or “simple” that society is.

Thirty-thousand years ago, we are obviously talking about a very simple society that could not afford to use its scarce time, labor and resources to develop more complex arrangements and specialized functions. There were no merchants, professional guides/transporters, accountants, bankers, lawyers, military officers, politicians or civil servants. There was only one part-time exception to this rule, and that apparently was our Paleolithic artist friend in the Chauvet Cave – or as I like to call him, “The Original Street Artist” (T.O.S.A).

With a torch, a bit of time, some memories and a lot of creative skill, T.O.S.A. descended into the Cave and sketched out the dynamic representation above of a horse in four different stages of mood (from left to right – calmness, aggression, sleeping, grazing), with thought also being paid to 3-dimensional qualities and the implication of motion. Experts believe that this mural was done primarily for aesthetic purposes, rather than the traditional explanation of cave artists etching animals which were later to be targeted in a hunt [see the beautifully produced documentary – Cave of Forgotten Dreams].

T.O.S.A. provides modern humans looking back at his/her work tens of thousands of years later with an invaluable lesson – that materially simple societies are not to be confused with intellectually or creatively depraved ones. In fact, these ancient works tell us that one does not have to own a copyright, a patent, a publishing company, a gallery or continuously advertise one’s “products” to contribute to society’s creative potential and make a difference. They teach us that some things transcend the confining structures of modern society and can never be erased.

As it turns out, we are currently in the process of returning to a much simpler society in upcoming years and decades. It is no coincidence that “street art” has become such a popular vocation in recent times, as the disenfranchised and disillusioned generations of the developed world are expressing both their frustrations and inspirations on property that does not “belong” to them. It is simply the act of communicating sociopolitical messages and equalizing wealth through art, symbolically or otherwise, and nothing less.

Perhaps the most popular and subversive street artist out there goes by the name of “Banksy”. Although he is most likely in his 40s by now, he has been a huge inspiration to a cadre of young street artists who are fed up with the capitalist system of privatized gains and socialized losses (which has been the rule for many years now, not the exception). In the wake of the ECB virtually gifting another several hundred billions euros to 800 different banks during the week, while peripheral populations continue to be squeezed for what little wealth they have left, these frustrations will only grow more predictable, widespread and, frankly, more justified.

Who Says the Euro is Pointless?

An unemployed Irish artist has built a home from the shredded remains of €1.4bn, a monument to the “madness” he says has been wrought on Ireland by the single currency, from a spectacular construction boom to a wrenching bust.

Frank Buckley (pictured above in the property) built the apartment in the lobby of a Dublin office building that has lain vacant since its completion four years ago at the peak of an ill-fated construction boom, using bricks of shredded euro notes he borrowed from Ireland’s national mint. He said:

“It’s a reflection of the whole madness that gripped us. People were pouring billions into buildings now worth nothing. I wanted to create something from nothing.”

Both graffiti art and other kinds of creative, “outside of the box” expressions have been on the rise in recent years. That is perhaps best evidenced by the level of political and police rhetoric/response aimed at these dreadful “property crimes”. Critics will often tell you that graffiti does nothing but promote territorial gang violence and destroy property value in urban neighborhoods. Most major U.S. cities have even created “vandal squads” in their police departments, tasked with taking down high-profile offenders.

But what is really the threat here? Is it that no-good punks are defacing other peoples’ property, or that our system of residential and commercial property has been artificially inflated in value for decades, pricing many people of lesser means out of the market, and those high valuations are currently being maintained by public, taxpayer money and systemic banking fraud? The truth is that “private property” only applies to the wealthiest members of society, while anyone else can be thrown out of homes they have been living in and maintaining for years by people with absolutely no right to do so.

Are the American people really so gullible that they are willing to believe aerosol tags on abandoned buildings, bridges, etc. are what’s driving gang violence among the country’s youths? That the extreme levels of wealth inequality, lack of economic opportunity, parental/social neglect, state-sponsored drug industries and cultural reinforcement in this society are not just a tad bit more responsible? Hell, even the “war against graffiti” that politicians and police are allegedly trying to win has been predictably turned into a cash cow for private companies.

The case of HERT, who is still awaiting trial, illustrates what some observers believe is an increasing crackdown on graffiti across the country. While, nationwide statistics on graffiti crime do not exist, the reallocation of police department budgets and resources suggests that cities are increasingly using prosecutions as a weapon to end the practice. For example, Graffiti Tracker, an Omaha, Nebraska-based company, which investigates graffiti crimes under contract with law enforcement agencies or sells them analysis software, is doing a thriving business. According to Timothy Kephart, Graffiti Tracker’s CEO, the company has over $1 million in contracts with police departments in 45 cities, towns and municipalities.

What these graffiti artists are doing is perfectly natural and understandable. They are searching for ways to express themselves and communicate with each other outside of traditional social structures that increasingly serve to isolate and alienate. They are protesting the concentration of private wealth that has gone completely unchecked and has left many young people stuck in a self-defeating cycle of poverty, drug use, violent crime and incarceration. They are attempting to make themselves visible to a society that either ignores them or treats them as irredeemable phantom menaces.

They cannot be kept invisible forever, though. These are the young adults that are suffering upwards of 20% unemployment rates across most Western countries, with about half of those in Greece and Spain unable to find jobs. Whether we like it or not, the structures of modern society are in the process of simplification and our daily compartments of specialized work and life are disappearing. Instead of punishing those who direct their anger/frustration into creative outlets, we should encourage it. T.O.S.A. produced a simple and elegantly beautiful portrait on the walls of Chauvet Cave in the course of a relatively short and “brutish” life. If there is onlyone thing that the disenfranchised masses need more of right now, it is things of such beauty.