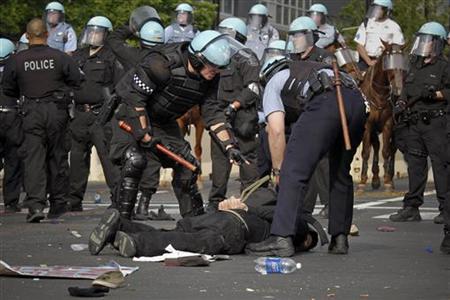 Sometimes, human societies existing on this crazy, tilting world are best summed up by a different theme song on any given day. When I read about the large-scale protests against banker-benefitting austerity across Europe, including the recent results of popular elections, I am washed over by a sense of satisfaction and progress. It feels like something positive is occurring over there amidst all of the economic/political confusion and chaos. The people in Athens, in Lisbon, in Madrid, in Rome, in Paris and elsewhere are banding together, at least for a few moments, to sing the Twisted Sister chorus in unison – “We’re not gonna take it!”.

Then, when I read about the protests against the NATO Summit in Chicago over the weekend, I start to feel very uneasy – a bit queasy, in fact. The people out there on the streets at physical risk are, of course, doing a courageous thing for a just cause, but I still get overtaken by the feeling that these protestors are clashing with the Titans on a severely mis-leveled playing field; that David is going head to head with a million different Goliaths – and this time David doesn’t stand a chance. Kyle Peterson and Nick Carey report on the protests for Retuers:

At least 45 arrests, some injuries in Chicago anti-NATO clashes

Four police officers were injured and 45 demonstrators arrested after baton-wielding police clashed with anti-war protesters marching on the NATO summit in Chicago on Sunday, police said.

A lawyer’s group assisting protesters challenged police figures, saying at least 12 protesters were hurt, some with head wounds from police batons, and more than 60 people detained.

The confrontation began after a 2 1/2 mile march from a Chicago park to near the site of the summit, where leaders of the NATO alliance are discussing the war in Afghanistan.

“I know that picture (of officers in riot gear pushing and hitting protesters) is going to be what people are going to run away here with,” McCarthy told reporters. “But cops are not here to be assaulted.”

Most of the officers sustained minor injuries, but one was stabbed in the leg, McCarthy said.

While the melee at the end of the rally received the most attention, the situation had calmed down by dark.

The size of the protests over the last week fell short of expectations. Police estimated about 3,000 people attended on Sunday, although many participants thought the crowd was larger. Organizers did not get the 10,000 people they had hoped for, or the 40,000 the anti-Wall Street Occupy movement boasted it would attract.

On Sunday afternoon, police ordered the protesters to disperse or risk arrest. Most of the demonstrators did, but several hundred ignored the order and police moved in.

Hundreds of demonstrators, reporters and photographers were hemmed in by lines of blue-helmeted police, pushing them back with plastic shields.

One young man sat at the side of the street, the back of his head streaming blood. His friends said he was hit by riot police.

“This is what police brutality looks like,” said Ryan Zielinski, 23, a protester who said he was hit in the chest with a baton as police pushed protesters back. “All we’re trying to do is protest and the police are attacking us.”

McCarthy said officers had endured numerous profane taunts and showed restraint. But he said police would not tolerate assaults by black-clad anarchists.

“What we saw is these guys rally their courage and say, ‘OK, let’s go. That’s what we came here for.’ And I have to say to myself, what are you thinking?” McCarthy said.

The march included people in festive costumes, a few parents pushing strollers and veterans of Iraq and Afghanistan wars.

Demonstrators had little chance of being seen by the world leaders and representatives from 60 countries at the meeting of the military alliance. The summit site, the McCormick Place convention center, is inside a security zone guarded by high fences. Protesters were kept blocks away.

President Barack Obama, who is hosting the summit in his hometown, convened the summit to chart a path out of the unpopular war in Afghanistan.

The Coalition Against NATO-G8, the group organizing Sunday’s march, wants an immediate end to the U.S. role in the Afghan war. Other protesters decried U.S. defense spending and economic inequality.

Matt Howard, a former U.S. Marine who served in Iraq, was one of nearly 50 veterans who threw service medals into the street near the summit site in protest.

Vietnam War veteran Ron McSheffery, 61, said, “I’m in total support of stopping NATO and stopping the slaughter of innocent civilians. If we took the money we spent on bombs and put it into green energy, we wouldn’t need to keep the sea lanes open” for oil transport.

The NATO Summit ended with some symbolic press statements about countries’ leaders “endorsing” a plan to get out of Afghanistan by mid-2013, but does anyone actually believe that anything of the sort will happen? Once the military industrial complex establishes a presence in a certain region, that presence is NEVER voluntarily relinquished. There is too much god damn money and power associated with making/using/trading high-tech weapons and gadgets, managing puppet governments, securing trade routes, extracting resources and blowing up anything or anyone that happens to get in the way.

That is especially true today, when the monetary and energy stakes couldn’t possibly be higher for the supranational powers involved. So when I read about these protests in Chicago, the chorus slightly changes in my mind – a little less upbeat and a lot more depressing:

“We’re not gonna make it,

no, we ain’t gonna make it!

Oh we’re not gonna make it,