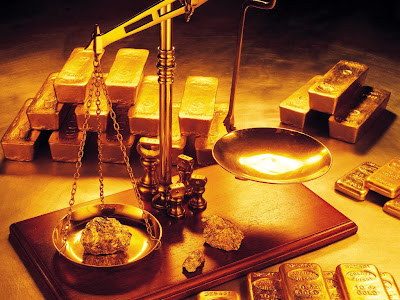 Last year, I wrote a series of articles addressing the theory of Freegold (Part I, Part II, Part III, Part IV, Part V), as it has been laid out by FOFOA on his website. This series was a comprensive attempt to debunk the theory by attacking its foundations, which range from Hegelian idealism to the (more concrete) marginal utility theory of value, and by replacing those foundations with what I believe to be more solid ones. Among these were Marx’s theory of capitalism, spanning his concepts of surplus value, rate of exploitation, over-production and realization of value, as well as the Fisher/Minksy theory of debt deflation (endogenous financial instability) and Dr. Steve Keen’s work, which ties many of these different economic strains together.

I realize now, though, that this was not the best way to go about attacking the theory for one simple reason – the concepts underlying the theory of Freegold are much too large to be addressed in any one series of articles, no matter how long they happen to be (and these articles were particularly long!). By trying to cram so many of my thoughts/critiques into this one series, I completely devalued the substance of what I was saying and made it very hard for readers to follow the logical progression of my argument. So, with that in mind, I’d like to take a much different tack over the course of this year.

Starting with a commentary in the next few days (perhaps tomorrow), I am going to hone in on a very specific concept incorporated into the theory of Freegold (herein referred to as “F-theory”) and present a specific critique of that concept. I usually have more than one critique of any given concept, but I will only present one at a time for the sake of brevity and clarity. These critiques will follow no particular order and will be sporadic – I will address a concept when I come across it or it is brought to my attention, I have some free time on my hands AND I feel like it should be addressed.

In addition, if I happen to come across a critique of Freegold/FOFOA concepts made by someone else (ones that I largely agree with), I will try to present those here as well (there aren’t many of those floating around, though). Some of you may be wondering – what’s the big deal with F-theory and why spend any time critiquing it at all?? In my mind, there are three primary reasons to do so:

1) FOFOA, the main advocate of F-theory right now, is a very astute student of economic/monetary history and makes very convincing arguments in favor of the theory. In fact, it is probably fair to say that I agree with 99% of things he writes about the setup of our current monetary system, but, nevertheless, I strongly disagree with his general worldview and most of his main conclusions about where we are headed.

2) FOFOA, in conjunction with F-theory, makes the most convincing case for near-term hyperinflation of the dollar that I have come across in the blogosphere, and I believe, like most people, that it is very important to discuss this issue and get a good sense of the most probable outcomes over the next 20 odd years.

3) F-theory presents a very interesting, unique and precise prediction for what comes after a financial/monetary meltdown, in terms of a new global economic paradigm. I am very DOUBTFUL that this prediction will turn out to be correct, for a variety of different reasons, and I hope to flesh out some of those reasons through these occasional commentaries.

DISCLAIMER: I am not an EXPERT on the writings of Another, his friend (FOA) or HIS friend (FOFOA), or on the theory of Freegold. Just like I am not an expert on the writings of any other economic theorist out there or their theories in general. There are a lot of economic works that I have not had the pleasure to read and a lot of ideas I have not considered in-depth, including those contained within the body of work that comprises F-theory. None of my descriptions of F-theory should automatically be taken as 100% accurate, and I welcome any and all challenges to my representations (this disclaimer will be re-posted with each commentary).

Remember, these critiques will jump around and will be sporadically-timed. This is primarily because I do not want them to take up all of my writing time for weeks straight like my earlier series did – there are many other important aspects of our current predicaments that I would like to spend time writing about. That being said, F-theory has earned enough of my respect that I am willing to devote a recurring commentary series to it. Right now, I will leave you with a link to and excerpt from a great article by FOFOA that first got me interested in his writing, which will hopefully peek the interest of others who want to better understand both the theory and well thought out critiques of it.

Freegold in the Proper Perspective

Freegold, in my opinion, is not a competing monetary theory. Nor is it a competing financial system. It is much more than these subjects of frequent debate. In my world, Freegold is a way to view unfolding events as they happen. It is a view of the valley below, as seen from a high vantage. It is a cipher for understanding what we see. It is not a description of what should be. Instead, it is framework, different from almost everything else you are reading, in which you can interpret unfolding events in a different light.

FOA: I (we) expect none of you to consider anything said here as credible. Everything is given as I understand it. If you came with a notion that I am someone who sees the future; grab the children and run far away. For these Thoughts, and my ongoing commentary, are meant to impact exactly as the “gentleman” said they would. People hear them, and whether believed or not, the words leave a mark. A mental mark on the trail, if you will. And later, after the world turns, our little “stacks of rocks” will be easier to understand next time you are passing this way. In fact, your ability to find your own way will forever be enhanced for having seen this path in a different light.