These are numbers six and seven in a series of articles documenting the principles and practice of eco-thrifty renovation written by Estwing of the ETR Blog for the Wanganui Chronicle.

You will recall from last week that I am a big fan of Neil Diamond and of pelmets. Unfortunately, Neil canceled his Wellington show last year. L Also unfortunate is that installing pelmets is probably not an option for most renters. (More on that in a moment.) We made our pelmets by reusing old rusticated weatherboards that we removed while re-cladding the exterior. I ripped the re-used weatherboards to 150 mm wide and inverted them so the scallop faced downward. Installed against the drop ceiling in the lean-to section of our home (kitchen, dining and bathroom), the pelmets also serve as an attractive crown molding. Our thermal curtains are hung inside the pelmets – as you would. But because we have retained single glazing, we have added extra-layers of eco-thrifty window insulation in two ways. The first is a modified version of what are commonly called “window quilts” in North America.
Traditionally, a window quilt is an expensive, custom-made quilted cloth that rides up and down in a fitted track installed inside of the window frame. I have never seen one during my four years of living in New Zealand, but, then again, I never saw a pelmet in my 40 years of living in the States. As an international ambassador for all things energy-efficient, I am happy to introduce a special eco-thrifty version of the window quilt to Aotearoa. To avoid confusion, I call this version a “window batten.” A batten is a long, thin piece of wood, in this case about 25 mm by 25 mm. We just used whatever off-cuts we happened to have at hand. 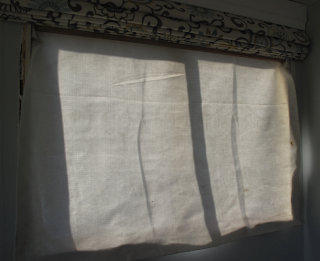 The main idea behind a window batten is that it replaces a window quilt for a small fraction of the cost. For instance, a window batten made for about $5 can replace a window quilt that could cost upwards of $200. Multiply that by every window in your home and you get the picture. Additionally, window battens can be installed without making any holes (screws or nails) in the window frame. That is because a window batten is held up by friction. This is how to make one.
Cut a 25 mm x 25 mm batten 5 mm shorter than the inside width of your window frame. Cut a 25mm x 10 mm batten the same length. Select a wool blanket, duvet inner, or quilted mattress protector (mattress pad) that measures about the same size of the window, but slightly bigger. Next, you’ll need to “sandwich” one end of the blanket between the two battens. Make sure to leave some extra fabric hanging over both ends of the battens. (This will take up the 5 mm shortfall of the battens and wedge the entire unit inside of the window frame.) Pre-drill three to five evenly spaced holes through both battens (and the blanket between them), and then fix a screw in each hole. That is your window batten. 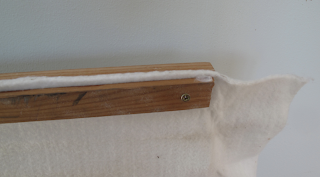 To install the window batten, fold the ends of the blanket over the ends of the paired battens and wedge the lot into the top of the window frame. If it is too loose, fold up a small piece of cardboard and wedge it in. If it is too tight, you may need to cut your battens shorter and try again. That’s one way we’ve insulated our windows against heat loss overnight. I’ll describe another way next week.
Peace, Estwing 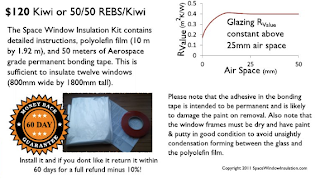 Dead air is not good on the radio, however, it is absolutely fabulous in your home. Specifically, it is great in your building envelope: the walls, windows, floor and ceiling. Another name for dead air is insulation. As my friend the rocket scientist likes to say, “In double glazing the second piece of glass is not the insulation, it is the air in between.” He went on to show me a graph of the R-values for double-glazing when the two panes of glass are set different distances from one another from 1mm through 50mm. Now you may think that only a rocket scientist can get excited about insulation. Not true, I have managed to get four columns in a row out of dead air! (Maybe that’s why I’m in the newspaper and not the radio.) 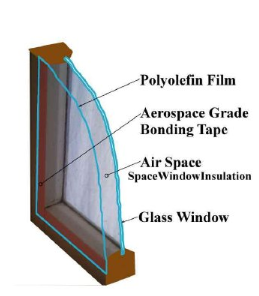 You will recall that last week I described how to make an eco-thrifty version of a window quilt that I call a “window batten.” Before that I wrote about the special relationship between curtains and pelmets, and before that it was pink batts. I promise this week will be the last on the topic…for now. 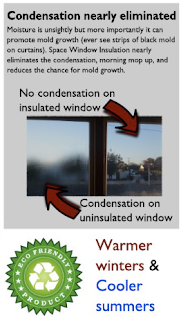 While not everyone is in a position to insulate their walls, ceiling or floor, or even to install pelmets, I think anyone could make eco-thrifty window battens. (By the way, did anyone make one after last week’s column? If so, please write a letter to the Chronicle and share your experience.) I also think that anyone could install plastic window film insulation that you can pick up in kit form from a number of places around Wanganui. Just as the second piece of glass is not the insulator in double-glazing, the piece of plastic is not the insulator, it is the air gap in between the plastic and the glass. My rocket scientist friend tells me that a 20mm gap is optimum. Anything wider does not improve performance, but anything narrower reduces performance. And by performance I mean R-value: the Resistance to heat flow. 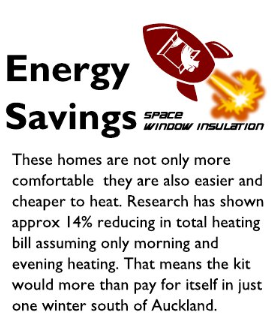 For instance, the R-value of an insulated wall is about 2, while the R-value of a single-glazed aluminium window is 0.15. That is so low that even a 5mm air gap that you will get by applying the plastic film to the inside of a standard aluminium window may double that window’s insulating ability to about 0.3. That’s still a lot less than an insulated wall, but one of the mottos of eco-thrifty renovation is “Every little bit helps…so long as it has a short payback period.” 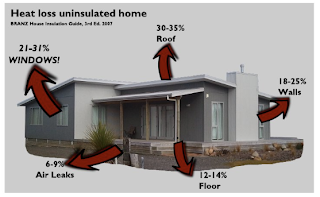 And while it may take a rocket scientist to calculate the exact payback period of plastic window film insulation, it does not take one to compare its cost versus purchasing new double glazed windows for an entire home. We are talking a few hundred dollars versus many thousands of dollars. And as long as the air gap is well sealed, the performance should be equivalent. As a matter of fact, I learned recently that tight fitting thermal curtains can be just as effective as double-glazing. I might add that window battens are just as effective as tight fitting thermal curtains. In our home we are piggy-backing many of these strategies. For example, 1 pane of glass + 1 air gap + 1 sheet of plastic + 1 air gap + 1 window batten + 1 air gap + 1 thermal curtain = 1 very low power bill. This type of horizontal lasagna of window treatments may not appeal to everyone, but I’m confident that saving money does. To quote my friend who is a solar engineer in the Himalaya mountains, “Warm is always beautiful.”