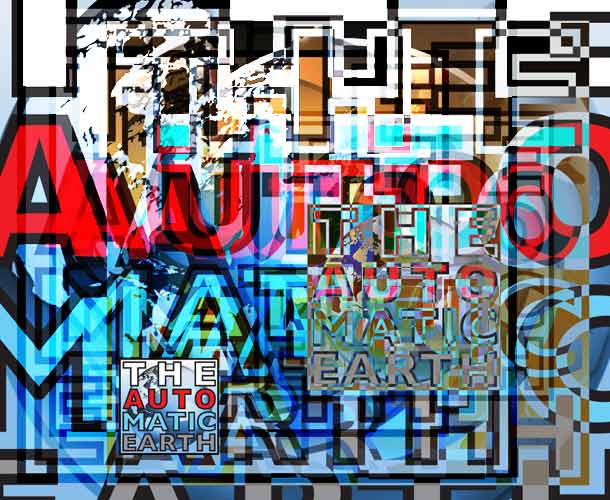 It's sort of funny that it had almost even escaped both Nicole and I altogether, but it's true, and we can therefore albeit belatedly remind both you and ourselves that The Automatic Earth turned 5 years young on January 22, 2013. I think perhaps the reason we tend to forget that date is that the start of the Automatic Earth in our view was largely a continuation of the work we had already been doing together for a few years, at the Oil Drum. We've been working together for over 7 years now, and though I know not everybody would agree, for us it has been, and continues to be, a great collaboration, very rewarding. What a journey! Never in our craziest dreams did we know way back when what this site would become.

A lot has happened in those 5 years of TAE. The crisis we started saying 7 years ago would happen, did. And while we since have at times, if not incessantly, stared in bewilderment at the levels of newspeak people accept from their leaders and elites, as their remaining wealth is being dragged out through the backdoor, we know the same people will wake up one day. Just a lot poorer than they would have needed to be.

Obviously there are tons of voices out there who think the crisis is over, or the worst of it (look at the S&P!), and that therefore The Automatic Earth has lost part of its relevance. While others feel we should focus less on finance and more on for instance sustainability. We choose to deal with what we think is most important at any given point in time. A substantial focal point in that is that in our view the financial crisis is by no means over, far from it, it's simply been swept under the rug, running on fraud and fumes, and at a huge cost to all of us. Just look at what's going to happen in Europe this spring, and you'll see our point.

No, The Automatic Earth is as relevant now as it was 5 years ago, if not more. Of course Nicole and I too grow and develop and learn, but we do so against the backdrop of a basic tenet that remains unchanged: that this crisis makes the idea of a return to business as usual, to growth, to a rising tide for all boats, impossible. If not ridiculous. Still, we're all of us faced with the fact that the intertwined spheres of politics, finance and media are in the hands of those who owe their power to what once was, and will use all of that power to return there, or die trying. Power doesn't just corrupt, it blinds too. And it's highly destructive.

And as they face backward, we must look forward and ahead. That is not so easy; we too must shake off models and notions that we've known all our lives. It's not just about finance either, of course. The outcome of the financial crisis, along with the backward facing attitude of what poses as leadership, will ensure we, as nations and societies, will be thrown head first into a grueling energy crisis, which also will take us away from all we've known all of our lives.

We're going to need to cut down our energy consumption by 95% or so, just for starters, because we A) won't be able to afford what B) isn't going to be available. Tragically, while that's not even impossible, we won't do it until we're forced to. Every single organism deals the same way with energy surpluses: burn it as fast as they can. We are no different; it's in our DNA.

And yet: knowing that we will always tend to do this offers a glimmer of hope and light. Just not on a large scale. We'll have to build a saner place for ourselves in small increments. Things like globalization, transport based economies and mass production are anathema to the world we're going.

The very first thing we need to do is bring our basic human needs back under our own control. We ourselves should own our water supply, not some foreign investment fund. We must take back control of our food supply from the chemical mastodonts that have taken it out of our hands. It's really simple. But it will be a long and hard and winding road to get there; we're too much part of what we must leave to make it easy.

That and much more is what The Automatic Earth will occupy itself with. Like it's done for the past 5 years, which have led to quite a rich library of articles, something we can feel at least a little bit proud of.

On a practical note, Nicole is going to delve into permaculture in Belize in a few weeks, hoping to get a more thorough understanding of that field. And then in mid March she's off to another long speaking tour of Australia and New Zealand. I won't join her this time mainly because about 15 hours from now I will undergo hip surgery and hence take my next step towards the $6 billion bionic man ideal. Hey, at least, that should leave ample time for reading and writing….

Since we haven't done a fundraiser in what is it, almost two years (?!), I think our 5 year anniversary is a good moment to launch one. Hereby. I'd say buying our DVD set with Nicole's lectures is a great way to support The Automatic Earth, but we would also love to see you continue to provide your donations in the same extremely generous spirit in which you have given them before. Our gratitude is such that it can never be adequately put into words. Suffice it to say that we can't do what we do without your donations. I'll add one of those thermometer things for the fundraiser when I get out of the hospital.

We pledge and promise to do the best we can and then some to provide you with a realistic picture of the world we live in and its and our future.

Finally, here's a treat for you, an hour long interview James Howard Kunstler did with Nicole recently when she visited his neck of the woods. Two such fine minds talking, what can go wrong?

JHK steps up to resume the KunstlerCast solo without Duncan Crary. I’ll do interviews with guests sometimes, and sometimes I will just yak on my own. This week I was fortunate to have Nicole Foss of TheAutomaticEarth.com swing by as an overnight houseguest and we got to sit down at the microphones for a chat. Nicole is a veteran of Canadian government’s electrical ministry and has worked in the nuclear energy ministries of the UK and the European Union. She has lectured all over Europe, the USA, Australia and New Zealand in recent years.

The new KunstlerCast theme music is called “Adam and Ali’s Waltz” from the new recording Waiting to Fly by Mike and Ali Vass.