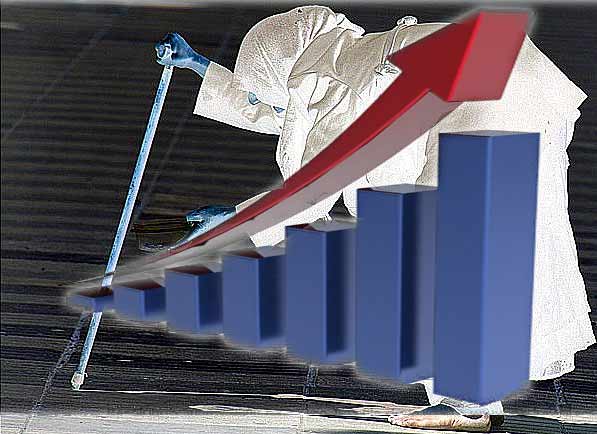 Obviously, after a week of big-time announcements, the German Supreme Court, Mario Draghi's bond buying scheme and Ben Bernanke's QE3 (both virtually unlimited – or presented as such), it's tempting to think the western world is well on its way to tackling its financial crises. Looking at the stock markets one might even presume all's fine out there already.

Still, that is – or indeed, seems – only true if you focus solely – blinders and all – on the world of finance. If, on the other hand, you would like to know where the world at large is going, that focus is simply too narrow. As central banks increase their balance sheets ever more, it would already take a huge leap of faith to have real confidence in the idea that what various previous European financial operations, as well as the entire alphabet soup of US bail-outs, could not achieve, now will be accomplished by what is basically more of the same, just more.

You only need to recall where all of those previous schemes ended up after the initial market exhilaration: that's right, they necessitated subsequent bail-outs. The narrow focus also tends to blind everybody to who's supposed to be paying for the bail-outs. Which is everybody. In essence, all that has been achieved, and that to a far lesser degree than ostensibly intended, is that banks haven't yet been toppled by their debts, and stock exchange numbers look – sort of – presentable.

The question then becomes: is it worth it? The answer to that is a resounding YES if you're a banker or a stock investor or an incumbent politician (Bernanke announced QE3 a comfortable 7 weeks before the US presidential elections). The answer is an equally resounding, if not outright debilitating, NO if you're not part of that small world where politics and money meet and live in relative splendor. Those who are not invited to that party will be called upon to foot the bill, without having anything to show for it.

It becomes clearer all the time that the financial world is not the world, the whole world and nothing but the world; it's merely a vanishingly small part of it. Yet is is the only part that most of those who follow finance and the economy seem to be watching, under the stubborn illusion that if markets go up, everyone goes up; all boats rise with the tide. Which is a big boatload of delusional nonsense.

The markets have so far only been able to keep up their look-good appearance because they have had, and continue to have – through the world's central banks – access to everyone else's cash, even the cash that everyone, no-one, hasn't even made yet. And all that is going to run off the tracks in spectacular fashion, be it tomorrow or the day after, because you can't run an economy forever on money that no-one has worked for.

Bernanke is willing to throw in another trillion or so – or two- dollars in taxpayer money, allegedly to create jobs, whereas he's already thrown far more at that same slippery wall (and for that same slippery purpose), and nothing much stuck before; so why would it this time around? Because he labeled it "unlimited"? There's no such thing, of course. Just because he can throw in $3 trillion doesn't mean he could just as easily do the same with $30 trillion (the bond markets would have him for breakfast).

Draghi wants to purchase sovereign bonds, that are not worth anything near their face value, at that same face value. But are we still clear on why he claims he wants to do that? Here's why: simply so Spain and Italy can continue to borrow more and more on the international markets. Which they can't and they won't, as Draghi knows as well as those same markets do.

That's not some unfortunate turn of events, it's all part of the plan; it will drive the countries into the very demanding hands of the IMF and ECB, who will hand out more bail-outs, but this time under the same conditions that Greece is facing: fire hundreds of thousands of civil servants, cut pensions, cut benefits, cut wages, longer working days, longer working weeks, and sell anything not bolted down to foreign investors at fire-sale prices.

Bernanke facilitates for international banks to dump their mortgage backed securities stateside and get paid far more than they're worth, with the only "condition" that he "hopes" this will create US jobs. Draghi facilitates for those same banks to get rid of their EU periphery sovereign bonds, so they'll allow for the periphery to stay inside the eurozone. There is nothing in either plan that puts the people first. There is always only that one focus: banks. But banks are not the economy, or rather: not your economy.

In the end, the economy is all people. But Bernanke and Draghi's schemes do not target all people, other than perhaps in very vague allusions: Bernanke pays far too much for worthless mortgage backed securities so the banks whose hands he takes them off have room to lend money into the economy (create more debt), which could hypothetically create jobs.

Well, that would, for one thing, depend on how much more banks have in their vaults in worthless and/or questionable "assets", obviously. But even as Ben spends – future – American tax revenues to buy the paper, that last bit is not revealed: how much more is there left where that last batch came from? Yeah, we‘ve been playing this game for five years now. And we still don't have an answer to that question.

It's sort of become the new normal: there's some unelected guy in a suit who speaks in language that's supposed to make us think he knows what he's talking about, who pledges trillions in additional debt, in whatever currency he deals in, to ostensibly make life better for the very people who are on the hook for those pledges, whether they're successful or not, and they haven't so far; unless someone would like to defend the success of US QE1 and QE2 – viewed from the man in the street's perspective -.

It's funny, I know, that they have been successful, in a sense (just not the one we're consistently and falsely told they're aimed at): they have saved banks from bankruptcy, and the S&P from sinking into triple or double digits. But the man in the street who's losing his home, his job or a large part of his paycheck, benefits, pension, doesn't care about whether the S&P is at 15 or 15000.

It's time to get this through our heads once and for all: Bernanke And Draghi Are Not Trying To Save Our Economies. Perhaps they would if they could, but the question is moot: they know they can't. Instead, they're trying to save the financial system by stealing our remaining wealth while making us believe that the economy and the financial system – a.k.a. the banking industry – are one and the same thing. They are not, and that's why we see our jobs and benefits and homes go up in thin air and smoke while the S&P looks rosy.

Those last two things are connected. The first are not, no matter that so far most people fall for the sleight of hand. Which is sad today, and will turn to tragedy tomorrow.