This is a post by Yves Smith at Naked Capitalism (see original here), who shares my worries (and quotes me) – as well as Syriza’s, of course – about what’s happening in Greece. She’s dead on in making the connection between #BlackLivesMatter and #GreekLivesMatter. What’s being done to Greece in this Chicago School style experiment is reprehensible and immoral. Europe is busy creating its own generation of gutter dwellers, first in Greece, and its own Untermenschen, yet again, just 70 years after WWII ended. Shame on them, and shame on you for letting it happen. Don’t!

The Troika’s willingness to turn Greece into a failed state first, as a side effect of its “rescue the French and German banks” operation, and now, as part of its German hegemony protection racket, is killing people and in the longer term will only accelerate the rise of extreme right wing elements in the Eurozone. As Ilargi wrote last week:

In what universe is it a good thing to have over half of the young people in entire countries without work, without prospects, without a future? And then when they stand up and complain, threaten them with worse? How can that possibly be the best we can do? And how much worse would you like to make it? If a flood of suicides and miscarriages, plummeting birth rates and doctors turning tricks is not bad enough yet, what would be?

If you live in Germany or Finland, and it were indeed true that maintaining your present lifestyle depends on squeezing the population of Greece into utter misery, what would your response be? F##k ‘em? You know what, even if that were so, your nations have entered into a union with Greece (and Spain, and Portugal et al), and that means you can’t only reap the riches on your side and leave them with the bitter fruit. That would make that union pointless, even toxic. You understand that, right?

Greece is still an utterly corrupt country. Brussels knows this, but it has kept supporting a government that supports the corrupt elite, tried to steer the Greeks away from voting SYRIZA. Why? How much does Brussels like corrupt elites, exactly? The EU, and its richer member nations, want Greece to cut even more, given the suicides, miscarriages, plummeting birth rates and doctors turning tricks. How blind is that? Again, how much worse does it have to get?

Does the EU have any moral values at all? And if not, why are you, if you live in the EU, part of it? Because you don’t have any, either? And if you do, where’s your voice? There are people suffering and dying who are part of a union that you are part of. That makes you an accomplice. You can’t hide from that just because your media choose to hide your reality from you.

It is time to take action, both here and in Europe. I hope you’ll send this post, and our related posts on the the ECB and Greece (see here for the overview and here on why the Fed is complicit) to people who would be sympathetic to the plight of Greeks, as well as to members of the Greek community themselves. Even if our suggestion is not a fit, it will hopefully spur them to come up with social media and public events to raise the visibility of the damage being done to Greece and other periphery countries in the name of misguided, destructive austerity policies.

Readers in the US know that the #BlackLivesMatter campaign has succeeded in bringing people of all races together to protest police brutality against African Americans. The protest shown below was held at the American Embassy in London. 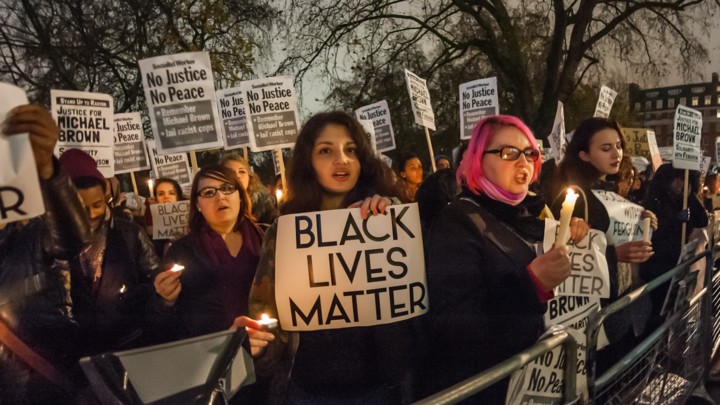 This effort has sufficiently rattled the New York Police Department, one of the targeted abusers, to start targeting peaceful protestors with an “anti terrorist” unit, leading public interest groups to lodge yet more objections.

One of its most successful means of raising public awareness has been to stage “die ins”: 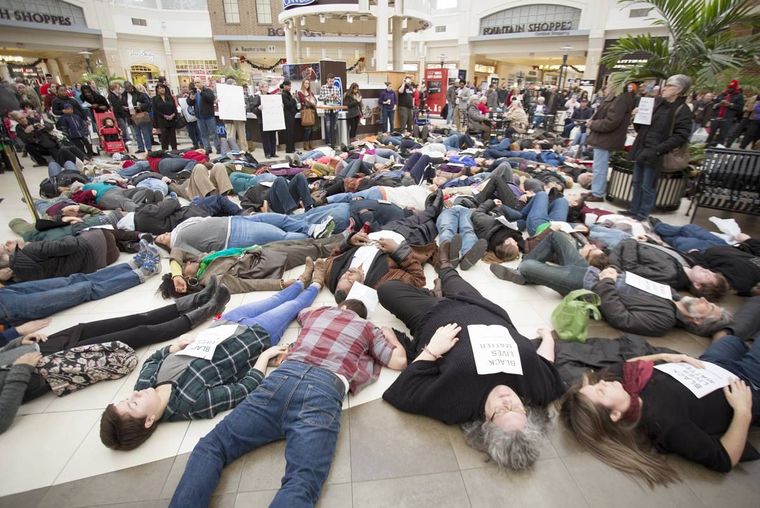 Grand Central has been the site of many #BlackLivesMatter protests.

The idea would be to bring the protests to central banks themselves, to the ECB in Frankfurt, to the Eurozone central banks, and to the Board of Governors and the New York Fed. Central bankers have managed to hide from public scrutiny and accountability. It is time to put them on notice that the public realizes that their bank-supporting policies are not just destroying economies and futures of young people, but causing deaths. The British Medical Journal attributed a 35% rise in the level of suicides in Greece to austerity. And that’s before you get to the harder-to-calculate impact of the damage austerity has done to the medical system, with many prescription medications beyond the budgets of hospitals. Extracts from a report at OpenDemocracy:

What I witnessed appalled me – and brought tears to my eyes.

In Greece’s biggest hospital, the Evangelismos Hospital in Athens, conditions were worse than those I have seen in developing countries.

The moment the hospital doors open on ‘emergency’ days, people flood in. The collapse in official primary and community health care services means everyone who needs healthcare comes to A+E – whether for a major accident, medication for a long term condition or to get their child immunized. Staff told me that serious trauma cases often have to wait hours for X-rays and treatment due to understaffing and that, if too many cases come in at the same time, people die before they can be treated…

Social solidarity health clinics have been set up all around Greece staffed by volunteers who try to provide basic care for those with no access to healthcare. Doctors, nurses and pharmacists volunteer in these clinics, but not nearly enough to meet the needs.

I visited the Social Solidarity Clinic in Peristeri, a district of Athens with a population of about 400,000 people. The volunteer staff, doctors and nurses who worked there told me that most local state run health clinics had been shut. The government had closed all the polyclinics then reopened some recently but with only 30% of the doctors that they need. Whereas previously there had been 150 doctors providing services to the district, there were now only 50. A polyclinic for a population of 400,000 people had no gynaecologists, no dermatologists, and only two cardiologists.

“We want our doctors back” – said one of the volunteers I spoke to. Thousands of doctors have left the country. Those that remain – including senior hospital doctors – earn about €12,000 a year….

Clinic volunteers said that people with long term conditions like diabetes or with cancer had particular problems getting the treatment they needed. Uninsured cancer patients can’t afford chemotherapy. The solidarity organisations appeal to people on chemotherapy to donate one day’s worth of medication for patients who can’t afford to the drugs themselves.

The Greek government passed a law in January allowing so that if people get into debt their property can be confiscated. Some people decline further treatment rather than accrue debt from healthcare costs that might lead to their family losing their home.

Greek mothers are now charged €600 to have a baby and €1200 for a Caesarian or complications. It’s twice that for foreign nationals living in Greece. The mother has to pay the fee on leaving the hospital. When the charges were first introduced, if the mother couldn’t pay, the hospital kept the baby until the payment was made. International condemnation led to that practice being discontinued and now the money is reclaimed through extra tax – but if the family can’t afford that then their home or property can be confiscated. And if she still can’t pay she can be imprisoned. An increasing number of newborn babies are abandoned in the hospital. One obstetrician I spoke to called it the “criminalization of childbirth.”

Contraception is unaffordable for many – health insurance does not even cover it. There are many more abortions – 300,000 a year –and for the first time the death rate in Greece is outstripping the birth rate. People can’t afford to have babies. It’s hard enough to feed and care for existing children.

Please circulate this post widely and tweet it, using #GreekLivesMatter. If you live in a city where a central bank is located, get this idea in front of organizers. They can no doubt adapt and improve upon it. And above all, send it to all the Greeks you know, even those in Greece who might send it on to friends and family in the diaspora.

If you are in the US, please contact your Congressman and express your dismay that the Fed is tacitly supporting the ECB in its reckless and destructive Eurozone policies and has the stature and the leverage to weigh in. Remember, many Republicans are as unhappy with the lack of transparency and undue concentration of power at the Fed. Even a small step supporting this effort is a step in the right direction.