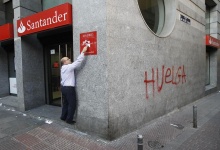 If the recent history of the unfolding Eurozone crisis is instructive, Spanish PM Mariano Rajoy’s unconditional statement today that his country will not need an EU bailout signifies that a bailout is exactly what it will need before the year is up. This fact is obvious to anyone who has the slightest idea of how bad Spain’s economy is right now, with an extremely weak housing/banking sector and unemployment that is upwards of 23% and rising. It is, of course, always the banks that get the lion’s share of any bailout money, and Spain’s banks are falling apart quickly. Sinead Cruise for Reuters reports:

Spain’s banks are fast joining the ranks of the most unloved in Europe just as many need to raise capital urgently, deserted by investors who believe the country is on the brink of a recession that many lenders will not survive.

The government has ruled out more state aid for a sector that comprises a motley mix of international lenders and heavily indebted local savings banks. That leaves two options: raising private capital or turning to the EU for bailout funds.

Prospects for a private sector solution are poor. Nothing on the horizon looks likely to persuade foreign fund managers to invest, such is the fear of the banks’ growing bad loans, their holdings of shaky sovereign debt and the worsening economy.

Already battered by a property market crash that began four years ago and continues unabated, few Spanish banks are able to borrow funds on wholesale credit markets and the majority are instead relying on the European Central Bank.

“Most are currently on liquidity life support from the ECB but asset quality continues to deteriorate as house prices keep falling and unemployment is still rising,” said Georg Grodzki, head of credit research at Legal & General Investment Management.

“Their funding remains constrained and competition for deposits intense,” he told Reuters.

But fund managers remain skeptical due to the slow-burning property crash. They include Mark Glazener, head of global equities at Dutch asset manager Robeco, who sold off his exposure to Spain at the end of last year. “Given the scale of over-building over all these years, the present provisioning that the banks have made does not appear to be enough,” he said.

Central and commercial bankers admit that more capital may be needed with the banks facing further defaults by businesses and mortgage holders as the economy slips into its second recession in three years and unemployment is forecast to hit 24 percent this year.

“If the Spanish economy finally recovers, what has been done will be enough,” Bank of Spain Governor Miguel Angel Fernandez Ordonez said on Tuesday, insisting that no talks were underway about any possible bank bailout.

However, he added: “If the economy worsens more than expected, it will be necessary to continue increasing and improving capital as necessary in order to have solid entities.”

Part of the problem for the Spanish banks now, in addition to their extensive exposure to troubled sovereign bonds and mortgage-related assets, is the fact that the EU’s prior “rescue” efforts have only made things much worse for the entire Eurozone periphery in the short, medium and long-term. As referenced here many times, the ECB’s LTRO programs have simply propped up the banks for a little while, while draining the peripheral economies of available credit and hastening the flight of private (now subordinated) investors from their troubled banking sectors. What else would one expect when trying to solve a debt problem by piling on more layers of unproductive debt?

Some people believe that while the ECB’s cash injections have offered immediate relief, they have also slowed down much needed deleveraging and reform of Spain’s banks.

A wave of consolidation aimed at weeding out the weakest lenders will cut their number to 10 from 40 but even those expected to survive are struggling to find favor.

“People are asking questions about the way banks are raising capital, through accounting, merging and amortizing losses over two years,” said one London-based bank analyst who asked to remain anonymous. “It’s a kind of capital-less capital raising.”

Bankia (BKIA.MC), created by a merger of seven regional banks or “cajas”, has caught the eye of hedge funds which are betting on a dip in its share price in the near-term.

The volume of Bankia shares out on loan, a proxy for short-selling interest, jumped 5.1 percent in the week to April 9, with more than four-fifths of the total shares that can be borrowed already lent out, figures from Data Explorers show.

Analysts at Citigroup suggest Spanish house prices could fall a further 20-25 percent before hitting a floor. This will eat further into the value of the 300-plus billion euros’ worth of property assets on banks’ balance sheets – 176 billion euros of which is already classed as “troubled” by the Bank of Spain.

Typical loan-to-deposit ratios, a measure of financial strength, show Spanish banks are already lending more cash than they have on deposit and the ratio is set to widen even further as unemployed Spaniards plunder their savings.

“It is still not clear where the resources will be found to close the gap in capital and required top up in provisioning for a number of the weaker banks that form a significant part of the domestic sector,” said Virna Valenti, senior credit research analyst at UniCredit (CRDI.MI) subsidiary Pioneer Investments.

“Only a couple of institutions currently have access to the wholesale funding market and this will continue to be the situation for a while,” Valenti said.

Paul Vrouwes, senior financials manager at ING Investment Management (ING.AS), said the majority of his peers would probably steer clear of buying Spanish bank shares until the country showed it could shrink its ballooning debts and generate economic growth at the same time.

“I think that Spanish banks will have to pay a lot more to investors like me to raise funds in the future. I am not so sure how they will manage when the ECB money needs to be paid back,” Vrouwes said.

So there is no doubt that Spain’s banks, and therefore Spain’s government, will need a bailout in the near future. The only question that remains is whether they will actually get one. Spain needs to roll over more than $300bn in bonds over the next three years (see graph below), and that amounts to almost half of the *allegedly* available support from the EFSF-ESM bailout funds. Basically, we are talking about a country that is much too big to fail OR save, especially when considering just how little chance it has of returning to internal growth during the next few years of record unemployment, capital flight and hard-hitting austerity measures.

Even if Germany and the rest of the onlooking EU “core” can manage to agree on the provisioning of funds for a Spanish bailout, it will remain just that – a hollow agreement. By that time, it will be clear that the Greek bailout/restructuring experiment was a total disaster, Portugal is following close behind and that Spain will completely devour all of the available capital left in the core. There is a very good chance that any funds promised to Spain will never make it there, and that Germany will use it as a much-needed excuse to cut its losses and run. Or, perhaps it will first be Spain that succumbs to popular resistance by its people and decides to leave. The one outcome that Europe can no longer tolerate is another bailout process which keeps the Union together and the banks alive, while the people are left to die.