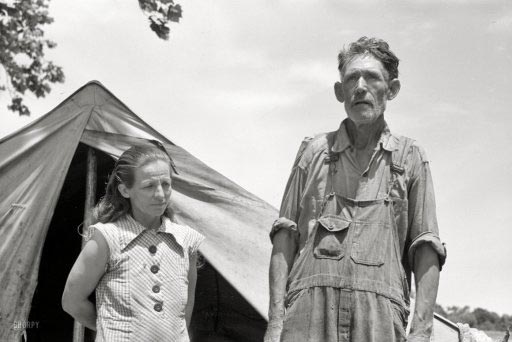 Russell Lee Vagabonds June 1939 “Veteran migrant worker and his wife camped in Wagoner County, Oklahoma. He has followed the road for about 30 years. When asked where his home was he said, ‘It’s all over.'”

As the U.S. election season kicks into high gear, we are going to hear a lot of people talk about “money in politics”. They are usually referring to the fact that corporations, industries and their professional lobbying hacks use campaign donations, expenditures and various other monetary tactics to influence the thinking, voting and decision-making of those who are running for or already in public office. That’s all a major part of the dysfunction (or non-function) of our “democratic” political system, and we will certainly see this mechanism in full force over the next 7 months.

Here’s how the race for hundreds of millions in campaign fundraising has stacked up so far over the course of 2011 and early 2012, in the run-up to the Presidential election in November. Barack Obama is at about $160 million and Mitt Romney sitting on less than half of that, at about $70 million, and Ron Paul working with less than half of that, at about $30 million. These are all obviously astronomical amounts of money in the eyes of the average American, let alone the average human being, and have only grown larger and larger over the last few decades of federal elections.

In addition, all of these fundraising figures fail to capture the corporate expenditures on specific presidential candidates through the vehicle of Super Political Action Committees (Super PACs). This scourge of money flowing into elections has become exponentially worse in the wake of the Supreme Court’s Citizens United decision of 2009, which essentially held that the First Amendment’s “free speech” clause protects corporations’ right to expend unlimited amounts of money on political campaigns. Total Super PAC spending has already amounted to almost $80 million, and we are just getting started (keep in the mind that only TWO of these candidates will actually run in the general election).

However, there’s another more fundamental aspect to “money in politics”. Let’s talk about the fact that many of our politicians, and especially those at the federal level, are literally indebted to and invested in private corporations. After all, these are merely people with assets, liabilities, portfolios and net worth just like anyone else. Regardless of how much they must spend to get into office and/or re-elected over multiple terms, there is no doubt that they will do anything in their power to make sure the value of their debt-laden assets does not collapse.

The Ethics in Government Act of 1978 required U.S. presidential candidates to file personal financial disclosure reports with the Federal Election Commission, and the latest data is for 2010. Open Secrets has helpfully compiled these reports on its website. Let’s take a look at a quick snapshot of the financial assets held by only one of the front-runners to become the President of the U.S. in January 2013 – Barack Obama – who has by far one of the shortest disclosure forms of them all.

The page excerpted above tells us that Obama has investments in equities that were valued anywhere from $250,000 to $550,00 at the end of 2010, and are most likely still within that range. According to the rest of the form, Obama has investments in U.S. Treasuries that were valued anywhere from $1 million to $5 million. Many people may argue that the Oath and associated responsibilities of the U.S. President will outweigh any concerns the man has for the value of his own personal investments, but I’d say those people are wrong. Think about all of his family and friends with similar investments, and the fact that he plans on funding his childrens’ education with that [illusory] money.

Now think about the fact that the state of Obama’s personal investments in the markets are NOTHING compared to that of Mitt Romney (his disclosure was 28 pages long), while many candidates also owe interest payments on debt they have taken on. The point is that, while the level of assets, liabilities and net worth vary significantly between the various presidential and congressional candidates for office, most of them have very significant monetary stakes in the system. Simple logic tells us that none of them will be much different than the others when it comes to making the fundamental reforms to our debt-based economy that are so desperately needed. Indeed, this commentary of mine is a bit like complaining about how the barn door is wide open after the horse is already long gone.

Even still, it is important to understand why these latest elections are dramatic theater in its most pure form, and we cannot simply resort to blaming the traditional “money in politics” process. For a good portion of American history, and especially the last few decades, the interest of voters in preserving the system has been fundamentally aligned with those of the large corporations and the politicians. The short-term benefits of kicking the can down the road for one, two… ten more years has completely over-shadowed any concern for longer-term equality and stability.

Now that many middle to upper-middle class Americans are in the process of exiting the markets and deleveraging, it is the wealthiest segements of society, including the politicians, who are left fully exposed to the negative monetary consequences of holding Wall Street accountable and implementing systemic reforms. That is why the Dodd-Frank Act did nothing to downsize the “too big to fail” banks or regulate derivatives, why the housing market is almost 100% backstopped by taxpayers and why the banks are given a free pass for fraudulent foreclosures, among many other things. It is why the only “change we can believe in” will force its way through the system from the bottom-up, rather than the top-down.