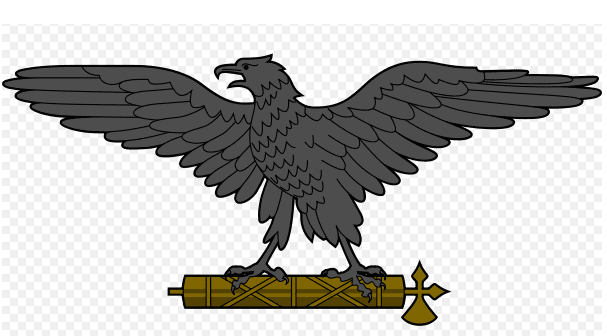 Eagle with fasces used on the war flag of the Repubblica Sociale Italiana. Image by Flanker

The plan to "save the euro through unlimited bond-buying" that ECB president Mario Draghi presented last week shows one thing above all, and with blinding clarity to boot – why nobody picks up on it is beyond me: it shows that Draghi is the least suitable person to present any such plan.

And it doesn't stop there: the countries that will need to pay for and/or guarantee the bond-buying will also be called on, just like the ones whose bonds are bought, to relinquish a substantial part of their sovereignty: the ECB wants much more control over the banking system across Europe. The drive is towards more centralized (i.e. Brussels, Frankfurt) control, leading to far stricter fiscal union and political union, which would take away much of the control eurozone countries presently have over their economies.

Ergo, Mario Draghi's plan is not an economic one, it's political all the way (sovereignty, don't you know). And politics is not Draghi's field, if only because he's neither a politician nor elected. He should not be allowed to have any say whatsoever in it.

The problem with the plan is purely political as well (granted, it's also financially completely useless, but that's another, though by no means separate, story). Nobody in Europe, other than a handful of bureaucrats, truly wants to hand over sovereign powers. For very good reasons, no politician in any EU country will campaign on promises to give the keys to the house away, no more than they will do so on handing over the keys to the safe. Ambrose Evans Pritchard quotes former Spanish PM Jose Maria Aznar as saying that the drive for full fiscal and political union is "deeply misguided":

"A United States of Europe is an impossible idea. It is a very serious mistake to try to destroy the nation states. You cannot go against the cultural beliefs of the people and the forces of history [..]"

Indeed; and only someone like Draghi would be blind to that. That's what makes him dangerous.

At some point in the process, you must let the people speak. And if you don't, they will speak anyway. Let's not forget that there is not an elected official in sight in the ECB, yet it still attempts to make decisions that are clearly political in character. The notion that it is all just about finance has long since turned vanished into thin air.

In our western democratic societies, all decisions should in principle be taken along democratic, i.e. elected, lines, and that includes any and all economic and financial decisions. The 17 members of the eurozone should therefore hold 17 separate referendums on whether or not their people are comfortable with giving up all sorts of sovereign rights to unelected institutions. But that is not very likely to happen, since the outcome would be all too clear: no, nein, non, no way.

Meanwhile, Europe wastes a lot of valuable time and money focusing on only one possible outcome of this crisis: that Greece and Spain and everyone else will and must remain within the eurozone. It would do much better to spend far more of that same time and money on a veritable search for a plan B. That is to say, a search for ways in which the weakest brethren can leave the eurozone without blowing up completely either themselves or the monetary union.

This is not some crazy idea. There are 17 countries in the eurozone, but 27 in the European Union. The extra 10 have all at some point or another stated their intentions to enter into the eurozone, but many of them now have second thoughts about that. They are doing relatively fine without the euro. And the enormous subsidies that were once handed out to newcomers like Greece, Portugal and Slovakia, the probably biggest reason to join, are no longer available anyway; they're gone for good.

There is no reason, other than a few purely administrative and practical ones, why Greece couldn't move from the eurozone to the more peripheral EU. The thing is, it takes a bunch of clever heads to structure, guide and execute such a process. But all of Brussels' clever heads (not that there are that many in the first place) are presently tasked with finding ways to keep Greece et al INSIDE the eurozone, not with finding ways to let them leave in relative peace and good relationships.

As for the danger of contagion, sure, if a way is found to let Greece go in peace, other countries may find such a process attractive for themselves. Portugal has entered the eurozone from a very similar and misguided point of entry to that from which Greece has. Spain could find it preferable to go that route as well. As long as this is executed as well as possible, it might well be doable. Italy is not the same story, since it was involved from the very start, in the 1950s, in the European project, and it therefore has far deeper roots in it.

Trying to keep the eurozone together against all odds risks blowing it up even when that's not necessary. It's not realistic to think that Germany and Holland are strong enough to carry everyone else. Allowing a few of the weak members to withdraw to the sidelines, whether temporarily or permanently, can create the breathing space for the stronger ones that they need far more urgently and strongly than anyone's willing to admit today.

It's time for transparency and realism, time to let those cramped white knuckles take a break from death-gripping on to the wishes and fantasies that hold the mirage together at a cost of several trillion euros per year. That sort of money is not available in the eurozone, it's as simple as that. That's nothing but a banker’s – wet – dream.

It's time to realize that these are not just financial problems, that they range much wider across European societies. And that therefore, it's insane to let people like Mario Draghi lead the way through and out of the issues. You can't, and shouldn't, let unelected bankers decide matters that influence every aspect of a society.

A central bank is supposed to be able to operate independently from the political system it operates in. But we should raise a question mark or two when it comes to the true political independence of for instance the Federal Reserve and the ECB.

And that's still, lest we forget, not the only kind of independence a central bank needs. Perhaps even more, we should wonder how independent former Goldman Sachs VP Mario Draghi is from the company and the industry he was a part of until fairly recently. And if we have doubts about both instances of independence, we need to conclude that Goldman Sachs may have gained political influence in Europe.

Europe is creating conditions – of misery, poverty and hopelessness – in a number of its member states, more in some than in others at this point in time, that are not unlike those that provided the space needed by the likes of Hitler and Mussolini to rise to power in the 1920s and '30s. And that is a grave danger.

I know, Mario Monti warned of this as well the other day, he even wants a conference on the topic. But conferences don't solve such issues. And neither do bankers and technocrats. Monti is a big part of the very problem he issues warnings about. If Europe wants to halt these developments towards political extremism, it should get rid of the two – unelected – Marios first of all.

Europe is ruled by a one-dimensional tunnel vision that maintains Armageddon will come if and when Greece leaves the eurozone. That is not true for the people of Greece or the rest of the eurozone. It may be true for banks and their shareholders, though. That is what all decisions are based on: preventing bank losses and, down the line, one or several credit events, that would unleash the wrath of the derivatives market.

That is still the essence of the entire crisis: the people in the street being forced to pay for the long lost wagers of those in penthouses and ivory banking towers. And while a shift away from bankers as deciders towards politicians is a good first step, it won't suffice by itself. What Europe needs now are statesmen (however hard they may be to come by) who focus on the next generation, not politicians, who focus only on the next election. Failing to do that will result in a lot of ugliness and bloodshed. The longer Mario Draghi remains where he is, the more dangerous it gets. It's not too late yet. But it soon will be.

Home › Forums › What Makes Mario Draghi So Dangerous For Europe