It is probably unsurprising that, as December saw redemptions of almost $25 billion from U.S. equity and mixed-equity funds (to bring total equity outflows for 2011 to about $140 billion), the volume of shares traded on the S&P has also crashed in 2011. Volume on the SPX index is now far below what it reached during the last recession, as shown by the graph below. 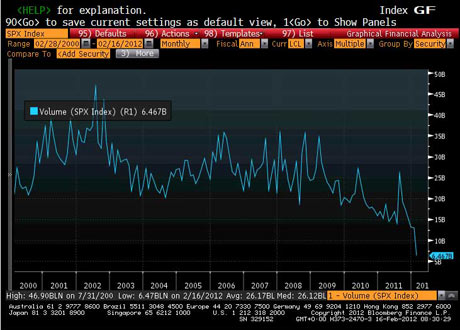 Louise Copper from BGC Partners included the following note to her clients with this graph:

“The chart showing the volume traded in FTSE 100 shares looks very similar to that above, with a huge drop off in volumes in 2012 and less than a quarter of the volumes traded since pre-crisis. Both the DAX and CAC have also experienced light trading year to date suggesting little conviction to the rally.

Volatility in the US and European equity markets has fallen a long way since the fearful times of Autumn last year, but has been increasing recently, suggesting concern is coming back.

So what is the conclusion? I think there is a real chance now that Greece does suffer a hard and messy default and that financial markets could suffer a serious wobble if it occurs.”

The increasingly few traders that make up the markets these days are hopelessly addicted to indications of massive government spending and printing. Pan-European austerity, better-than-expected U.S. economic data, the theater of election season and the very real prospects of a “hard and messy” Greek default, to be shortly followed by very similar prospects for Portugal (where unemplyoment just reached a record 14%), do nothing to reassure investors that they will be getting either of those things. At least, it won’t be nearly the quantity and purity of the drugs they were expecting.

Perhaps the markets will avoid rolling over for a few more days or weeks as the tried-and-true rumor mill starts churning, and the Eurocrats reach some sort of last-minute deal with Greece on Monday “at the brink of disaster”. But everyone is quickly becoming aware of the tremendous downside risks if that doesn’t occur, on top of the fact that, even if it does occur, it won’t change a thing for the European periphery which is now contracting at break-neck speed. We can only hope the last remaining “retail investors” extract their money before the bottom gives out (again), but unfortunately a lot of people are destined to lose their “savings” at this point (again).