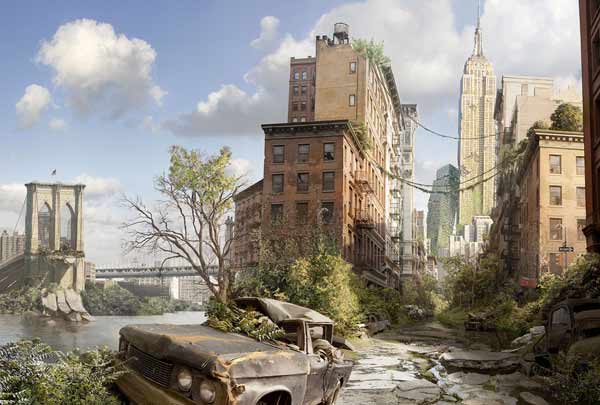 But Heineken didn't just think about beer. When the European Union was formed, he devoted time to letting his light shine on that project too (Heineken was a known Europhile). What he brought to the table was that, of course, he knew Europe well, from his own unique personal business experience. He oversaw, hands on, not just sales, but also marketing in all the different European languages and cultures.

Heineken didn't trust that the European Union would work the way it was proposed – and eventually organized -. According to him, if Europe were to be a success, it would have to be divided in far smaller units than the nation states that had been formed post-WWII.

It's reminiscent a little of Joel Garreau's "Nine Nations of North America", published in 1981. I don't know if Heineken knew the book, but given his overall curiosity and his wide array of contacts with business leaders, politicians and artists all over the world (Heineken was a very wealthy man), it wouldn't surprise me. Then again, his vision is based on completely different ideas than Garreau's.

For those who are not familiar with Garreau's work, here's a map of how he "envisioned" North America: 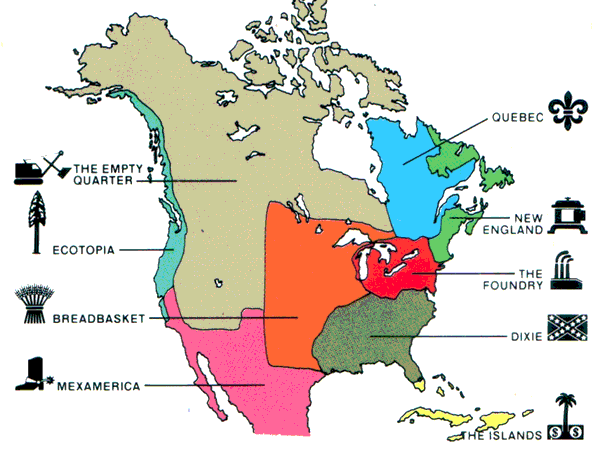 Back to Heineken, who would have found Garreau's units far too sizeable for his liking. He was thinking along the lines of optimally manageable untis.

Heineken called it "Eurotopia" – a contraction of Europe and utopia. He was well aware of the skepsis the idea would garner. But radical times call for radical measures. And the way things are going, I prefer utopia over dystopia. 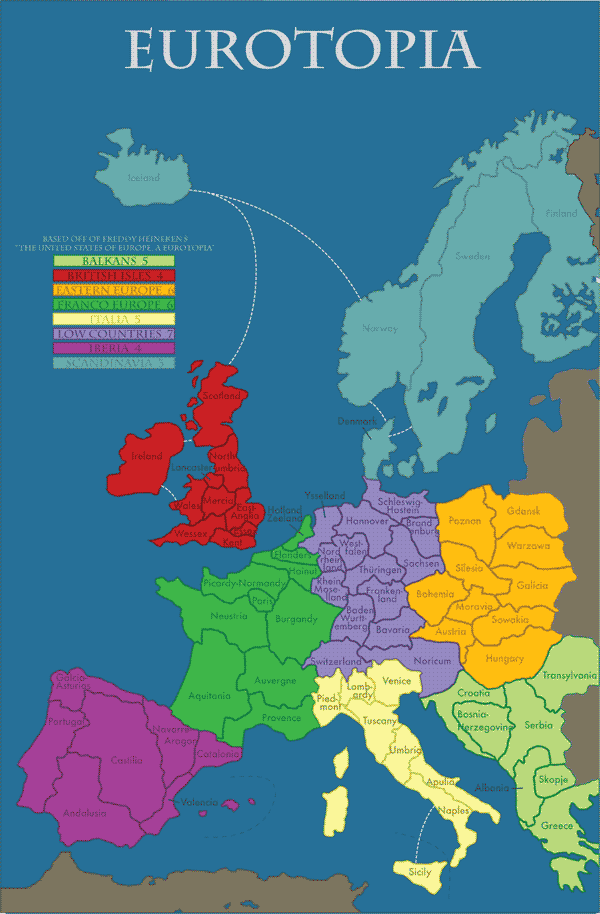 "(…) Heineken was convinced of the positive consequences of this process of the decay of centralism in favour of a Eurotopia as he called it. Immediately after the signing of the Maastricht Treaty in 1992 many were already afraid of a Europe that was becoming too large and too powerful, despite the fact that, as an antidote for this, a representational Committee of the Regions had been included in the Treaty in order to weaken these tendencies and, at the same time, answer the call for more regional autonomy.

The proposed decentralization and federalizing of Europe on the basis of smaller geographic units proceeded from the central idea that it would prevent conflicts and promote stability and equality. This assumption was based, on the one hand, on the theory of the British historian C Northcote Parkinson that smaller national units could be less centralized, more efficient and therefore more stable, and, on the other hand, on the thesis of the Austrian sociologist Leopold Kohr (1957) that ‘bigness is a problem’. In effect, both embroider [Denis] de Rougemont’s initial preference for a regionalized, federalist Europe.

According to an almost apodictic commentary in The Economist, if the logic for splitting up Czechoslovakia could be carried through, then there was all the more reason that the same should be done in Belgium, with its even greater language and economic divisions. Meanwhile, Spain fears the regional autonomy claimed by the Basques and Catalans, while France has to deal with a Corsican struggle for autonomy; similar claims are made by the Scots, Hungarian minorities throughout the Balkans, and so on."

So why all this attention for a billionaire beerbrewer's spare time activities? The answer lies in those last lines. "Spain fears the regional autonomy claimed by the Basques and Catalans, while France has to deal with a Corsican struggle for autonomy; similar claims are made by the Scots, Hungarian minorities throughout the Balkans, and so on."

The map of Heineken's utopia could quite feasibly serve as the blueprint for a dystopia. When the financial crisis starts to bite for real, and it will, count on it, it appears inevitable that nations and/or parts of nations begin preparing for independence. There are plenty of regions in Europe that hang on as parts of larger entities only for economic reasons. When these reasons no longer exist, appeals for separation will become louder.

It won't be a coherent movement, far from it. It will be chaotic. But there seems to be no way that certain regions will not fall prey to populists, nationalists, and in general the resurrection of age-old ideas that never disappeared, but that simply lay dormant under a thin veneer of riches.

It is not at all imaginary that regions want (back) their independence. And neither is it that borders between regions will be contested, that people will be told that only warfare will be sufficient to show "those over there", who committed untold horrible if not unspeakable atrocities an untold number of years ago, that now is the time to avenge the ancestors who died to defend the land they now live on.

It will not develop exactly along the lines and borders that Freddy Heineken saw as desirable. But we may well one day think back of that map, and not for the reasons Heineken meant it for. I think along those lines on a regular basis when I see the likes of Monti, Draghi and Rajoy present their grandiose plans to save the union, and their place in it, far more costly than any can afford, as it's sinking ever deeper into its overwhelming debt morass.