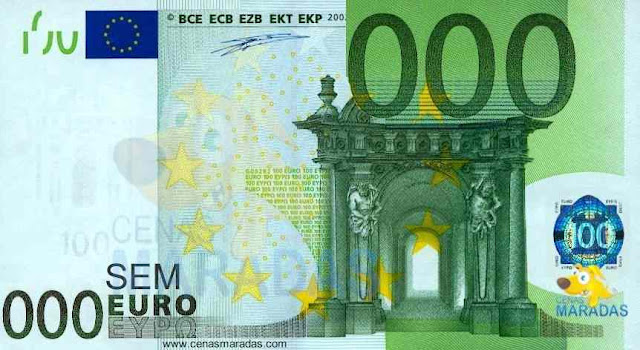 No global recovery until 2018, says Oliver Blanchard at portfolio.hu.:

It’s not yet a lost decade… But it will surely take at least a decade from the beginning of the crisis for the world economy to get back to decent shape.

Well, that makes it easy then, you would think. Solves a lot of problems in one go. All bailouts and loans and other measures can now be halted and reversed when and where possible. Since there is no way our central banks and governments can keep on doing what they have done for another 6 years (yeah, I know lots of you doubt that, but there's just no way).

There's not enough money on the planet. Not even enough credit. Nor enough buildings to torch in Athens and Madrid. The IMF et al might as well give up and move on to Plan B, C, Z. Which they don't have. Or, better still, resign. Which they won't do unless they're forced to.

Instead, Blanchard, the chief economist of the IMF, which is a member of the eurozone troika and a major player behind bailouts, and "reforms" all over the world, is apparently completely ignored. Not one mention in the US presidential debate, and Mario Draghi didn't exactly showcase him either. Maybe that's why he did the interview in Hungary?!

Mitt Romney promised America 12 million new jobs "with growing wages". I guess he thinks that while the rest of the planet stays mired in the morass, the US can reach for the skies. And you know, I must admit I did catch myself thinking that if the US could play the role of Bain Capital, vs the rest of the world in the role of the companies that Bain took over and sucked dry, sure, that might have worked. And he does have that experience.

But unlike companies, you can't bleed dry, bankrupt and wholly obliterate entire nations that are part of the UN, NATO, the EU, the eurozone. For more reasons than I care to get into detail about.

What the troika is doing with Greece and Spain had already gone too far; 6 more years of that, and in ever more nations to boot, is but a nutty, make that fully insane, notion. Check out the protests in Athens, Madrid and Barcelona to date, extend that to 2018, and then add a dose of Bain Capital. In other words: if Blanchard is correct, the US won't recover either. If the rest of the world tanks, so will America.

And besides, when it comes to those 12 million jobs Romney was talking about, if you take the real unemployment rate of anywhere from 12-15%, and add the millions of Americans who don't count in any official stats anymore, those 12 million are not an impressive number. But can still be presented as such because math seems to have become an un-American activity. Put another way: 12 million jobs in 4 years is 250.000 a month, while, just to name an example, initial jobless claims have been hovering at or above 350.000 a month for years now. At least 6 million jobs are needed in the next 4 years just to play even. Today's report announced 114,000 new jobs and markets go skywards. Beam me up, Scotty.

But hey, in the present day global economy the US is not the most interesting party (sorry!). That role is still firmly embedded someplace in Europe, even though it's hard to say exactly where. Granted, the Syrian-Turkish border has a shot at first place, but that's black swan territory. For now.

There's so much zombie capital fleeing to America that stateside reality can remain hidden for a while longer. Oh, and when Bill Gross warns of the disaster US debt and deficit will mean for the dollar, he's just doing what he does best: talk his book. Follow his rhetoric at your own risk.

The EU/eurozone are still, and consistently, doing everything wrong that they can. From the point of view of the citizens of the membership countries, that is. All policies, bailouts, reforms, you name it, serve the interests of bankers and politicians. And that is what Blanchard, again: inadvertently, makes clear. And nobody follows up on his words.

Look, the only thing that really challenges the EU relationship with those member countries that are not in the eurozone, is the unquestioned and unquestioning push to include them in that same eurozone. If the euro crisis has proven one thing, it's that this inclusion is, to put it mildly, not the nirvana it's been made out to be. Far from it, take just one look at Greece, Portugal, Spain. And still no-one talks about the good and beneficial relationships that exist, and that can arguably be extended, between eurozone members and EU non-eurozone members. It's either all 17 eurozone nations staying together or Armageddon befalls us. Nothing or all. And all for nothing.

There is absolutely no reason other, than credit events, why Greece et al could not make the move in the opposite direction, i.e. leave the eurozone and still remain EU members. Trade inside the EU does not depend on having the same currency. The eurozone is a badly botched project, and it's beyond repair. But the EU is not. However, all the EU leadership, and that of its members' governments, focus on at the present time is keeping the currency union together. That blindness will, indeed and inevitably, develop into an existential threat to the EU.

The EU is its own worst enemy. But, again, it's not the people who live in the EU, it's the leadership. The people have a different enemy. Their leadership.

Still, if the people don't pay a whole lot more attention than they have so far, they will be played out against each other, a story as old as the world. The Greeks are told their hardship originates with Germany, the Germans are told that the Greek spending and credit insanity has caused their upcoming losses. Both stories are nonsense, but both people believe them. And that's where the danger is for both.

From the (Hungarian) Blanchard interview:

Q: How far do you think Europe should go in terms of fiscal and economic policy integration so as to make the common currency zone successful?

There has to be more solidarity between member countries. When a country is doing poorly the others have to be willing to help in various ways, not only out of solidarity, but because trouble in one country may well spillover to theirs. This is why the fiscal union and the banking union proposals being worked on as we speak are so important.

Q: Do you think solidarity is that strong in Europe? The U.S., for instance, is one nation, but the countries in Europe focus on their own specific interests. So do you think Europe is unified enough in this sense to create a strong fiscal integration?

A: There has to be solidarity. And I think it is there.

"In terms of fiscal and economic policy integration [..] it has either to go forward or to go back, but it cannot stay where it is. I think nobody really wants to go back, so it has to go forward". And: "There has to be solidarity. And I think it is there."

No, there is no solidarity of the kind Blanchard thinks of (i.e. people don’t want to move forward under the present conditions), and so, no, the integration will NOT go forward. People may not want to "go back", but they also don't want to shoved into the abyss or the furnace. That way forward Blanchard et al. are talking about simply means more downward pressure on the PIIGS (and beyond eventually).

Do you think the Spanish and Greek populations will sign up for that sort of thing? Over half of the young people don't have a job and now they're going to sign over control of their economies and their lives to the very people they blame for taking their jobs away? Let me answer that for you: you don't.

And who believes the Germans and Dutch and French and Finnish will volunteer to cede control to a bunch of buro-technocrats in Brussels? The rich and poor of the eurozone face the exact same enemy, they just don’t see it yet. But that will not last forever.

"There has to be solidarity. And I think it is there." Yes, there's buro-techno solidarity, and these guys think that's all that counts. They've been getting away with it so far, so why not, right?

Neither does it really matter to them. The race is the prize. Every next day, every next bailout means more money for their side. And to date, they manage to make the very people hit by budget cuts and austerity measures actually believe (!!) that tightening their belts is for their own good. That is not going to change until the demonstrations in Athens and Madrid coincide with protests in Amsterdam and Paris. But it will change.

It's sort of like how Monsanto operates, and Dupont, Sygenta, who have nothing but patience. All they need to do is grow a field with their own corn and wait till it "contaminates" neighboring fields. Monsanto have a patent on their corn, their neighbors don't on theirs, and so Monsanto can't lose in court. Plus, Monsanto hasve the lawyers geared up (they know their own MO very well), and the rest doesn't. It’ll take a few years, but then they’ll control it all. Unless patent laws change in the US, Germany, India, China. But even then it will already be too late: changing patent laws retroactively is a whole different story.

Just like changing bailout and "reform" deals retroactively can't be done. All the money involved will forever be transferred from the public to the private sector, and the debt will have gone the opposite way. If and when the protests turn too bloody and ugly, after first having sent in the snipers, the boys count their winnings, divvy up the loot, and disappear in some private resort.

These are guys that play a power game. And the ones that float to the top play the ultimate power game. The visible ones for power itself, the ones you don't see (power and visibility don't rhyme) for power and money. The way the game is set up makes it inevitable that psychopaths, those people who have no way of identifying with or caring for the people around them (except for immediate family and friends, perhaps), end up in control. Those who do care for people in general, even if they’re power hungry, can't go all the way playing the game requires of them.

And the markets are up. But still all the king's men couldn't put Humpty Dumpty back together again.

Oliver Blanchard make a few things clear. The crisis, recession, depression, whatever you choose to call it, will last another 6 years or more. During that time, the people of Europe will get poorer as they go along. So will the people of America. Global means what it says: global. He also makes clear that the IMF expects the people to comply with the Europeanization that the IMF and the rest of the banking class have in mind. Ever more central control, vs the ever stronger call for decentralization in Catalunya, Pays Basque etc., and soon in many more places. Globalization has no place in a shrinking, deflating, deleveraging world.

The IMF will lose their battle for control. But the people will be losers too. Southern Europe fears the Germanification of their countries, their thousands-of-years ancient societies, and rightly so. The Germans themselves would be wise to fear the Club-Medification of theirs. Or should we label it Club-Medication?