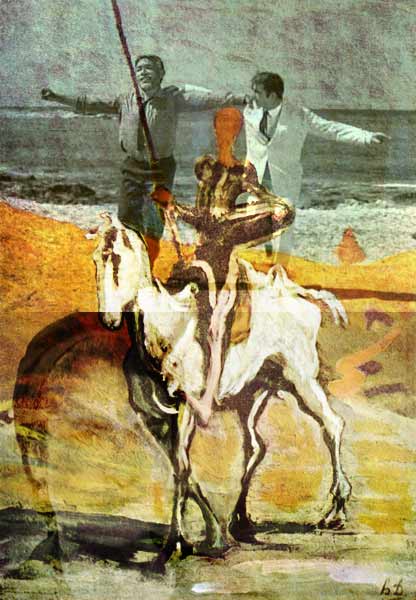 Fitch has given the ESM, which reportedly became "operational" today, even though the Eurozone members will take years to full its coffers from today's €200 billion to the desired €500-600 billion, an AAA rating. The European (hey, what happened to Emergency?) Stability Mechanism needs this rating in order to sell bonds. Since eurobonds are not deemed acceptable by too many parties involved, the new pride of Europe will start selling … right, eurobonds, just under another name.

With which, for starters, it can fund the 7000+ policemen needed to protect Angela Merkel as she oversees the troika induced damages in Athens, riding in on some modern version of the milk-white steed that scorched earth conquistadores rode throughout history to assess the loot. Bad move, Angela, if only because the battle is not yet won.

Did you notice that the Troika report is still not out yet? Wasn't that supposed to be presented ages ago? Shouldn't those guys have been moved to Madrid over the summer? True, Spain still insists it neither wants nor needs a bailout. But that's just bull, which makes the efforts to conceal it bull fighting. Spain will need much more money than anyone has admitted to date, as will Greece, new kids on the chopping block Cyprus and Slovenia, and old hands Portugal and Ireland. By the time the magnitude of the required bailouts can no longer be hidden, Italy will join the fray, followed by France.

Europe's on a road to nowhere but down, for no better reason than the safeguarding of political careers and a bankrupt banking system. The best we can hope for is that in Athens tomorrow, October 9, the headlines will not be what Merkel and the Greek political class have to say, but the mass demonstrations that will take place despite the crackdown that has been announced.

Sure, Merkel is smart enough to have something nice to say tomorrow, to not come empty handed. But Europe is stuck in a downhill Groundhog Day experience where every new day comes with new – higher – demands, new rounds of worse numbers and new measures that take away more of what little the people at the bottom have left.

Trying to preserve the European Union at any price is the surefire recipe to break it apart, and not in peaceful ways. The people presently in power in Brussels, Paris, Athens, Madrid and Berlin and all the other capitals have eyes for one way forward only, no Plan B. And it is high time that in one or more of these capitals that situation changes.

If the Athens demonstrations become massive and/or violent enough, the position of the Samaras government will eventually become untenable. The same of course is true in Madrid, where tens of thousands of people hit the streets on an almost daily basis. It's just that tens of thousands doesn't do the trick. It takes millions, and on a continuous basis.

Protests need to effectively paralyze a society to remove a government. Of course we could argue this already happened in several European countries, but so far control had been strong enough to make sure the new guy was just like the old guy. And even if Merkel would lose next year's elections, another Europhile will take her place. Holland last month didn't even bother to elect a new guy.

The change will have to come from the poor part of town; and not through elections, but through more direct democracy. Obviously, if you add up what's already been done to Spain and Greece, and you top it off with the fact that both will need a lot more of the same, while other problem cases will also come knocking, it's hard to see how not at least one European government will be toppled.

The current political paradigm in Europe is way past its best before date, and it is and will be directly responsible for what follows. Which cannot possibly be pretty, because the paradigm is solidly based on taking away everything that's not bolted down, from the people themselves, and from the countries they live in.

How that could ever count as a strategy to keep a union of countries together is a great mystery. What Could Possibly Go Wrong? Or rather, it's a nonsensical excuse, albeit apparently credible, to keep the looting going until there's nothing left to drag off home. Here's hoping at least one nation decides to stop the wrecking ball before it's left with nothing but misery.

Here's to Zorba. And Don Quixote. Poverty is inevitable in the western world, even as people still refuse to even contemplate what a $1 quadrillion derivatives market can do to their economies and their lifestyles once it starts getting shaky. New found poverty has started in Greece and Spain, and it will spread through the rest of Europe, North America, Japan, Australia etc. Poverty need not rob people of their pride, their morals, or their kindness. It all too often does, though.