This is number ten in a series of articles documenting the principles and practice of eco-thrifty renovation written by Estwing of the ETR Blog for the Wanganui Chronicle.

Last week I wrote about foam window and door seal, and home-made draft-blockers. Did anyone install either of these? If so, please write a letter to the Chronicle and share your experience. Here is a short story to motivate you:

Last Friday night I went fishing with my mate. When I got to his home he was not back from work, so I chatted with his wife about window battens and draft blockers. My mate arrived, we went fishing for two hours and returned for tea. In the meantime, his wife put up one window batten, swapped a short curtain for a floor-length curtain, and put a long draft blocker along the base of their aluminum French doors. (Although the doors are well-sealed against drafts, they do conduct heat through the metal.) When we returned she greeted us with, “Isn’t it much warmer in here now?”

Window battens and draft blockers can be made from items found in the house and shed, but there are some other eco-thrifty items available for purchase from local businesses. For example, draft excluders can be found in the same shops as window and door seal, insulation, and compact fluorescent light bulbs. But, I have some special eco-thrifty advice on draft excluders. 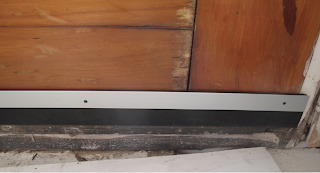 Sidebar: Sometimes being cheap is expensive: A case study. 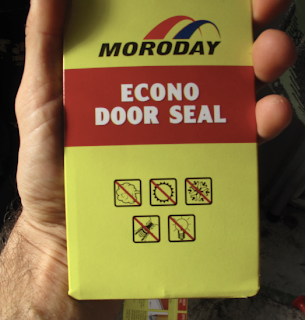 The cheapest draft excluder is made of plastic and is held to the door with an adhesive strip. Considering the heavy traffic that most doorways encounter, I do not trust the durability of either the plastic or the adhesive. I would suspect that this product would fail in short time and then need to be replaced. Ergo, being cheap is expensive. The second cheapest one has an aluminium strip but is still held on with adhesive. As Bon Jovi would say, “We’re halfway there.” But an adhesive backing is just living on a prayer in a busy doorway. 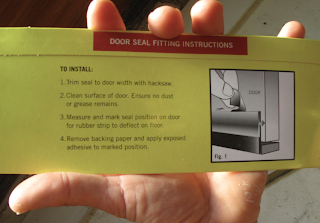 The next one on the price scale is pre-drilled aluminium with fixing screws, but it was a far sight dearer than the previous one. So my solution that saves $4-$9 on each one is to buy the middle one (aluminium with adhesive) and to drill my own holes and use my own screws. This achieves the low cost / high performance mandate of eco-thrifty renovation. 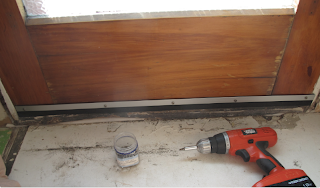 But it also raises another point: it takes a little more work. Yes it does, but it is paid work. It pays you back in energy savings. All of the work we’ve done has resulted in a savings of over $200 per month (conservative estimate) compared to the average New Zealand power bill. I look at this as a kind of “wage” that has no tax withdrawn from it. In another way I see my efforts at energy savings and education as paying “rent.” I’m only spending a short time on this beautiful, diverse, wondrous planet that has given me oxygen to breath, water to drink and waves to surf. The least I can do is pay my rent.