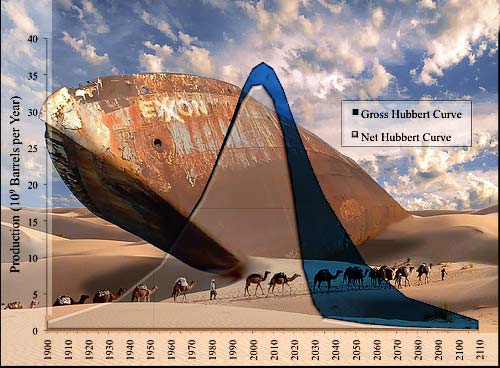 George Monbiot recently made a major about-face on his peak oil stance, on the grounds that unconventional oil represents a new reality. The basis of his u-turn is a recent report on unconventional oil by Leonardo Maugeri, (former) oil executive at Italy's Eni, published at Harvard University, where Maugeri's a Senior Fellow at the John Kennedy School, Belfer Center, which we discussed here at TAE in Unconventional Oil is NOT a Game Changer.

We were wrong on peak oil. There's enough to fry us all

Peak oil hasn't happened, and it's unlikely to happen for a very long time.

A report by the oil executive Leonardo Maugeri, published by Harvard University, provides compelling evidence that a new oil boom has begun. The constraints on oil supply over the past 10 years appear to have had more to do with money than geology. The low prices before 2003 had discouraged investors from developing difficult fields. The high prices of the past few years have changed that.

Maugeri's analysis of projects in 23 countries suggests that global oil supplies are likely to rise by a net 17m barrels per day (to 110m) by 2020. This, he says, is "the largest potential addition to the world's oil supply capacity since the 1980s". The investments required to make this boom happen depend on a long-term price of $70 a barrel – the current cost of Brent crude is $95. Money is now flooding into new oil: a trillion dollars has been spent in the past two years; a record $600bn is lined up for 2012.

I sent George a short response to his article, by way of opening a dialogue:

What we are facing is a demand and price collapse that will render unconventional supplies uneconomic. Natural gas is leading the way over the next few years. The high cost and low EROEI are fatal flaws.

And received this reply:

If there's a collapse in demand, peak oil is not an issue, right? If there's a resurgence of demand, unconventionals become economic again. As for EROEI being a constraint, try telling that to the tar sands producers in Alberta.

The debate continues. Here is my next installment:

A demand collapse will certainly put peak oil on the backburner for a number of years. The next few years will be remembered for financial crisis as we move into what will be at least as bad as the Great Depression (and very likely worse, since the bubble was much larger this time). Peak oil will not have gone away, however.

We have used the cheap and accessible oil (and other fossil fuels) and what remains will be exceptionally, and increasingly, expensive in both financial and energy terms. Predictable consequences will follow from this, but in a complex interaction with many other factors, notably the context of the huge credit bubble bursting. This amounts to crashing the operating system. For a while, resource constraints will be relieved due to economic seizure (i.e. the collapse of both the money supply and the velocity of money).

During the period of financial crisis, deflation and deleveraging, weak demand will buy us some time, but at the cost of setting us up for a supply crunch later. The period of sharply falling prices will kill investment in the energy sector, because the cost of production will fall less quickly than prices, meaning margins will be squeezed. Both physical and financial risks will be much higher. A lack of economic visibility will be anathema to what are inherently long term projects.

In addition, trade collapses during periods of economic depression, as for instance letters of credit become impossible to obtain, and the lack of funds for maintenance compromises the integrity of distribution infrastructure. Infrastructure may also be deliberately targeted during the inevitable upheaval. All of these factors act to reduce supply, and would be difficult, or impossible, to reverse quickly if demand were to rise.

When supply and demand become tight, what transpires is not a simple price spike, but an exaggerated boom and bust dynamic. This has been underway since 2005/06. The first full cycle unfolded from 2005/06 to 2008. The second began in 2008/09 and will probably end with a price bottom relatively early in this depression with a resurgence of military demand, given that oil is liquid hegemonic power.

That should feed into the third cycle, which should send prices sharply higher in real terms, if not to a new high in nominal terms. This price volatility, against a backdrop of severe economic contraction, upheaval and fear is leading towards a profound societal change, most likely a significant period of involuntary loss of socioeconomic complexity.

You mention the tar sands, and they are indeed an interesting case – an arbitrage between cheap natural gas and expensive syncrude that can continue while the price disparity is maintained. They are able to make money, even though they are not producing much net energy. Unfortunately for the tar sands producers, the price disparity is set to reverse.

The hype surrounding shale gas has crashed the price to the point where it is on the verge of putting producers out of business. Natural gas in North America appears to have bottomed, while the perception of glut in unconventional oil, combined with weak demand and a lack of appropriate infrastructure for internal North American sources, is set to undermine oil prices considerably.

Tar sands projects will be under acute threat under those circumstances – not imminently, but over the next five years or so. Once one cannot make money from some combination of artificial input/output price disparity, public subsidy and the ability to socialize externalities, then EROEI becomes the defining factor, and the EROEI for tar sands is pathetic.

While I agree that oil men do not base decisions on EROEI, ultimately EROEI will determine their ability to make money, and that is their driving motivation. Finance can only temporarily allow people to ignore thermodynamics.

EROEI effectively determines what is and is not an energy source for a given society (ie to maintain a given level of socioeconomic complexity). Unconventional fossil fuels are caught in a paradox – that their EROEI is too low for them to sustain a society complex enough to produced them.

They can only be produced for the relatively short period of time that the complex society built on conventional sources continues to maintain its current capacities, but as the conventional sources disappear, and that society can no longer support itself, the ability to undertake all the activities required for unconventional production will be lost. The hype has no foundation.

We have been living in a major departure from reality in many ways, as always occurs during bubble times, but those times are coming to an end. Instead of overshoot, we are headed for undershoot, and we are not going to like it.

Note the critical paradox of unconventional supplies. That is where the cornucopian view of energy, where Monbiot now seems to have landed, breaks down.

The same argument applies to renewable power as it is currently practiced. Without affordable conventional fossil fuels, the increasingly complex alternatives cannot be developed and exploited.

We find ourselves in a world of receding horizons.

What high Energy Return On Energy Investment makes possible, low EROEI will eventually take away, following a brief boom that constitutes the last gasp of our modern energy bubble era.