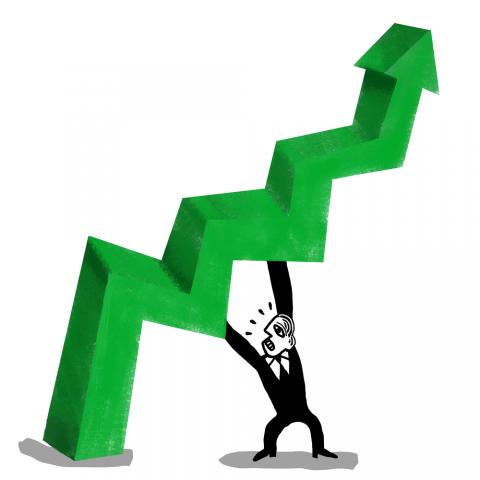 It has long been our position at The Automatic Earth that North America is collectively dreaming with regard to unconventional natural gas. While gas is undeniably there, the Energy Returned On Energy Invested (EROEI) is dramatically lower than for conventional supplies. The critical nature of EROEI has been widely ignored, but will ultimately determine what is and is not an energy source, and shale gas is going to fail the test.

As we pointed out in Get Ready for the North American Gas Shock in July 2011, the natural gas situation is not what it seems at all:

The shale gas bubble is a perfect example of the irrationality of markets, the power of perverse short-term incentives, the driving force of momentum-chasing, the dominance of perception over reality in determining prices, and the determination for a herd to stampede over a cliff all at once.

The perception of a gas glut has driven prices so low that none of the participants are making money (at least not by producing gas) or creating value. We see a familiar story of excessive debt, and the hollowing out of productive companies dead set on pursuing a mirage.

Many industry insiders know perfectly well that the prospects for recovering substantial amounts of gas are poor, and that the industry is structured as a ponzi scheme. Still, there has been money to be made in the short term by flipping land leases and building infrastructure to handle gas.

The hype is so extreme that those who fall for it contemplate, in all seriousness, North America becoming a natural gas exporting powerhouse, and a threat to Australian LNG producers, or to Russia's Gazprom.

This concept, constructed from a mixture of greed and desperation (at the lack of conventional gas prospects), is entirely divorced from reality. (See here for Dimitri Orlovs excellent piece on why Gazprom has nothing to worry about.)

Nevertheless, euphoric hype is extremely catching. Given that prices are driven by perception, not by reality, hype has the power to change the dynamics of an industry, exaggerating boom and bust cycles in practice. The hype has resulted in the perception of glut – that North America is drowning in natural gas. The inconvenient fact that this peception is completely wrong does not alter its power in relation to prices.

Natural gas companies gambling on shale gas have been facing prices so low – far below the cost of production – that all of them have been producing gas unprofitably. The financial risk has been increasing dramatically as the companies have been drowning in debt trying to ride out the rock bottom prices that have been the result of people believing the fantasy. Finally, casualties of the financial shenanigans involved are emerging. It is very likely that there will be many more, as companies that have tried to ride out the low prices go under.

Alas, thanks to the Feds zero-interest-rate policy and the trillions it has handed over to its cronies since late 2008, the sweeps of creative destruction have broken down. Instead, boundless sums of money have been searching for a place to go, and they're chasing yield when there is none, and so theyre taking risks, any kind of risks, in their vain battle to come out ahead.

The result is a stunning misallocation of capital to the tune of tens of billions of dollars to an economic activity drilling for dry natural gas that has been highly unprofitable for years. It's where money has gone to die. What's left is debt, and wells that will never produce enough to make their investors whole.

But the money has dried up. And drilling for natural gas is collapsing. Last week, there were only 562 rigs drilling for dry natural gas, the lowest number since September 1999… 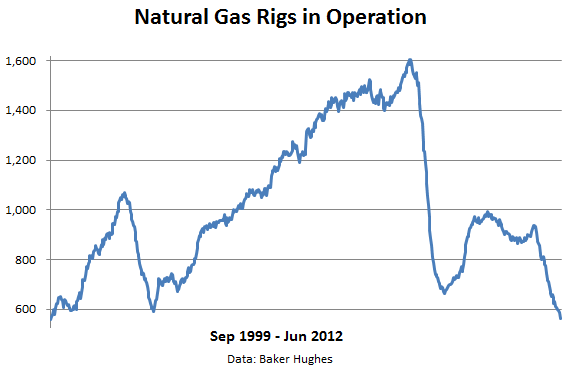 The economics of fracking are horrid. All wells have decline rates where production drops over time. But instead of decades for traditional wells, decline rates in horizontal fracking are measured in weeks and months: production falls off a cliff from day one and continues for a year or so until it levels out at about 10% of initial production. To be in the black over its life under these circumstances, a well in the Barnett Shale would have to sell its production for about $8 per million Btu, pricing models have shown.

…Drilling is destroying capital at an astonishing rate, and drillers are left with a mountain of debt just when decline rates are starting to wreak their havoc. To keep the decline rates from mucking up income statements, companies had to drill more and more, with new wells making up for the declining production of old wells. Alas, the scheme hit a wall, namely reality…

…The natural gas business is brutal. The peak in drilling occurred in September 2008 with 1,606 rigs. Then the financial crisis threw it into a vertigo-inducing plunge. After last years mini-peak, the plunge continued…

…Production lags behind rig count, and while rig count for gas wells has been setting new decade lows, production has been rising month after month to new record highs. But lagging doesn't mean decoupled. And someday…. Oops, it already happened. It has started. Production has turned the corner, and not just in one field, but across the US. 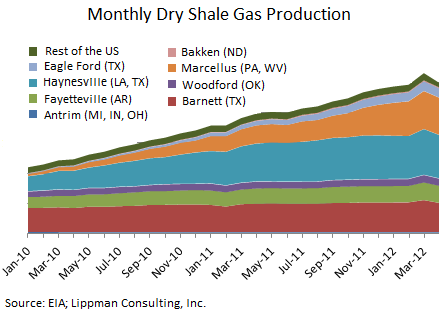 Its still just a little notch in the curve. But its a sign that the collapse in rig count is translating into lower production numbers. And when the steep decline rates are beginning to overlap the drop in rig count, production will head south in a dizzying trajectory.

Money has been thrown at the industry, but the notion is dawning that the game is up and that returns will never materialize. The ponzi scheme has reached its natural limit, and investors are waking up to the realization that they have been chasing a fantasy.

Ironically, just as the washout begins, natural gas prices may have bottomed. Conventional natural gas in North America peaked in 2001. Coal bed methane and now shale gas have been revealed to be massively overblown as an energy source. Producers are reaping the consequences of malinvestment and will be going out of business. Demand has been building with the transition from coal to natural gas for power generation. This is an ideal set up for a supply collapse and subsequent price spike.

North America is poised for a huge natural gas shock. Far from being an exporter, North America is going to experience a natural gas supply crunch. Prices will be rising at the same time as peoples purchasing power falls precipitously, thanks to deflation. The structural dependency on natural gas that has been cemented in recent years is going to guarantee maximum pain as prices reconnect with reality.