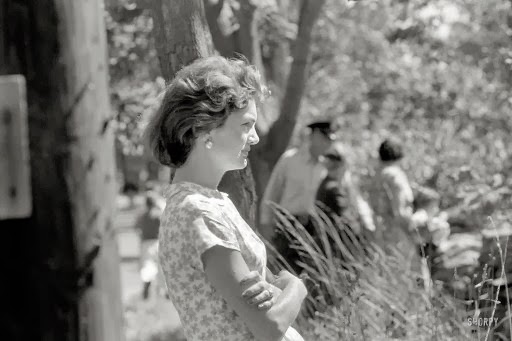 Yes that’s right, The Automatic Earth has a new home (again)! It’s been a huge effort with the scarce means we must manage with, but it’s finally here. We hope you feel welcome here, and that we can now pick up where we left off, and start growing again on our way to what we think we should be: the biggest possible picture provider.

Our good friend Mike ‘Mish’ Shedlock was apparently fined €8000 by the Authorité Français de Marchés (AFM, French financial markets authority) for quoting a French blogger on his own blog on August 15 2011; the topic involved was the degree of leverage of big French banks, in particular Société Générale (SocGen). The French blogger, retired finance professor Jean-Pierre Chevallier (who was fined €10,000), had posted numbers a day earlier on claiming that SocGen’s leverage was much higher than the bank’s own numbers showed, while its Tier ratio was much lower (2% vs 9.3%).

AFM states that Mish should have checked those numbers, or rather, he should have published, if anything, SocGen’s own numbers, exclusively. Which I guess is because asking questions about banks’ own statements is not desirable. It can’t very well be because banks’ financial statements are failsafe and foolproof, as became evident around the same time. Belgian-French bank Dexia collapsed in October 2011, after acing the European Banking Authority’s stress tests that summer (12th best among 91 banks). The AFM itself had finished an investigation and threatened to put Dexia under supervision, but never did. If Dexia showed one thing, it was that banks’ financial statements were, to put it mildly, not necessarily reliable.

And it’s not as if Chevallier had invented data, he simply took SocGen’s own statement and used a different accounting measure to arrive at his different numbers: 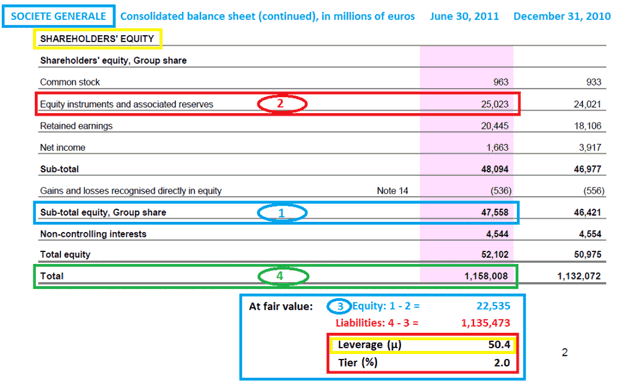 Indeed, the French bank counts in its equity item 2: Equity instruments and associated reserves which are actually different forms of liabilities related interests subject to some conditions.

It is really simple, provided you talk this sort of talk. And Chevallier does. And so does Mish, who quoted him here: BNP Paribas leveraged 27:1; Société Générale Leveraged 50:1; Sorry State of Affairs of U.S. Banks; Global Financial System is Bankrupt.

The story did not appear in a void; in the days before Chevallier and Mish published their blogs, there were rumors afoot in the market: Société Générale Bankrupt? Rumors Send EUR/USD Down, and some media even claimed that president Sarkozy had returned from his holiday to talk with SocGen executives.

Some additional numbers were crunched, and there appeared to be a sort of consensus that SocGen’s leverage was bad, but not as bad as 50:1, more like 25:1. In an addendum to his post, Mish said:

Société Générale disputes the numbers and new calculations using the banks’ numbers are 28:1 or perhaps 23:1 not 50:1 as noted on Forex Crunch.

My position has not changed much. Something is seriously wrong at Société Générale. Banks do not plunge out of the blue on rumors. I do not know the precise leverage, but shares are acting as if Société Générale has severe capital constraints (which of course they will deny) and/or other major problems.

Then the Wall Street Journal had this a few weeks after the Chevallier article:

The IMF puts U.S. banks’ core Tier 1 capital at close to 16% as of the end of March, versus just over 10% for German commercial banks, a little under 9% for French banks and barely 7% for Germany’s state-owned savings banks.

During the height of the 2008 panic, regulators focused on a narrower definition of capital, known as tangible common equity, which includes banks’ reported equity and retained earnings minus goodwill, intangibles and any preferred stock. By its own account, Credit Agricole’s tangible common equity is just 2.1% of its assets—which means its €1.6 trillion balance sheet is leveraged nearly 49-to-1. Credit Agricole argues that €500 billion of that should be netted out because of its hybrid banking/insurance business model, which still leaves it leveraged 33 times.

BNP Paribas and Societe Generale are somewhat less leveraged, at 24 and 23 times their tangible equity, respectively. As a group, these three banks have some €4 trillion in assets on their balance sheets, supported by €129.3 billion of tangible common equity. By contrast, J.P. Morgan Chase and Bank of America have nearly $4.4 trillion in assets between them, supported by $253 billion in tangible common equity. That’s a leverage ratio of 17 for the U.S. banks versus nearly 27, on average, for the French big three.

An IMF report in July offered one explanation for why French banks remain so heavily leveraged compared to their U.S. counterparts. The authors note “the bias of the present system” in France, “which encourages excessive financial leverage, and contributes to a dearth of equity financing for innovative projects and an inefficient allocation of resources.”

The numbers are less bad than Chevallier’s ones, but still. No word of a complaint with or by the AFM vs the WSJ though. 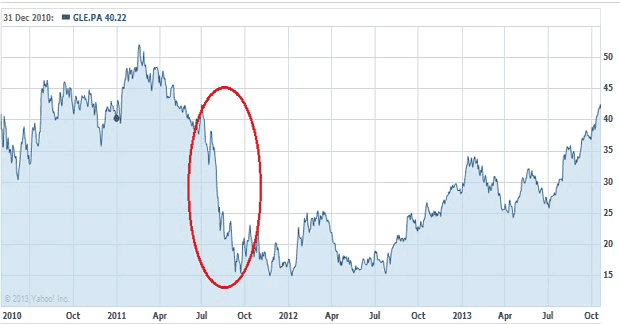 So it’s easy to understand why SocGen sought to quell more bad news. The way they, and the AFM, went about it, is not.

The AFM sent its complaint to the SEC, and they notified Mish. The blogosphere, I guess, is not allowed to ask questions, or, as in the case of Chevallier, to do their own math.

Now, I’m thinking this is a clear matter of having to pick one of two options.

No 1): SocGen is sufficiently transparent with its numbers that no questions about them are warranted, because they’re demonstrably accurate.

No 2): SocGen doesn’t like people asking questions about its numbers, and that can only be because they’re not accurate.

If 1) is correct, SocGen would have had no reason to file a complaint against either Chevallier or Mish; they could have simply issued a press release explaining the numbers in a “transparent” way, digit by digit, and what the bloggers had gotten wrong about them. But they didn’t. Instead they filed a complaint.

The fact that SocGen did not choose option No 1 means only option No 2 is left: they filed their complaint because they don’t want to discuss their numbers, and that is because the numbers are not accurate.

So who can actually and legally question the numbers SocGen’s numerous, brilliant and creative accountants and lawyers issue? Well, the AFM of course, the same entity that ended up fining Mish €8000 for merely quoting a French blogger. Why are they not investigating SocGen’s numbers instead of Chevallier’s interpretation of them? After all, who’s more likely to twist the numbers around, who has more reason to do so, the blogger or the trillion dollar bank?

Wolf Richter had a nice quote from the AFM itself:

In its decision, the Sanctions Committee stated that it had jurisdiction to rule on the dissemination of inaccurate information about a financial instrument that can be traded in a regulated French market, whether or not it was disseminated in France, and regardless of whether it was disseminated by a Frenchman or a foreigner.

And for the first time, the commission applied Article 632-1 of the AFM’s General Regulations to information posted on the Internet by financial bloggers; it reads:

“Everyone must refrain from disclosing or knowingly disseminating information, regardless of the medium used, that gives or may give inexact, inaccurate, or misleading indications about financial instruments, including spreading rumors or broadcasting false or misleading news, when that person knew, or should have known, that the information was false or misleading.”

Yes, that says “Everyone” who gives “inexact, inaccurate, or misleading indications about financial instruments”. But Everyone of course should include SocGen itself, because they too “may give” inexact, inaccurate, or misleading indications. And the AFM is the only institution with the legal powers to check if SocGen’s financial statements are correct. Have they? How are we to even know? By accepting SocGen’s statement, the AFM makes itself a potential accomplice if any irregularities appear in that statement, either today or in the future. But they don’t seem to care.

Instead, they turn around and fine two bloggers who write they think those numbers are not correct, and who might otherwise, had they not been “investigated”, have been more than happy to retract their words if either SocGen or the AFM had published numbers that were both correct and transparent. Where is the AFM report on its investigation into SocGen’s numbers?

SocGen will never be attacked on its statements no matter how wrong they are, simply because it is among the richest hence most powerful hence must lawyered up entities on the planet. The AFM, like the SEC, grossly misinterprets its mandate, which should be to protect the nation and its people, but which they like to think is to shield the banks they are supposed to control, from criticism.

If the bank and/or the regulator don’t like that criticism, all they need to do is to issue a press release that explains where the numbers go wrong. They don’t do that. The regulator doesn’t respond by investigating the numbers the banks publish, but by going after the people who question them.

Well, and there’s of course the idea that if you’re a big bank, you should be able to strong-arm anyone less wealthy and powerful into fearful retreat. Flex your muscles. Flex your legal department. You know, make democracy work for in your favor. The same if you’re government agency.

And maybe it’s partly a French thing. Maybe people there don’t quite understand how the internet has changed their world. Maybe the idea is still that enough grandstanding and a-huffing-and-a-puffing from a government or corporation will shut everybody up, and if you go after two bloggers, the rest of them will be too afraid to write what they think. But in the process, they make something that was not a personal issue at all at the beginning, very much personal. Hardly ever a smart thing to do. And now there are a lot of persons with internet access. They may really want to think that one over another time. Maybe ask China about its experiences.

Mish has vowed not to travel to France (though he can still write about it), and Jean-Pierre Chevallier will appeal the decision. I think SocGen and the AFM would have done a lot better to put this matter into the same drawer that Dexia report disappeared in two years ago. Now it’s all out in the open again. Which makes people wonder all over again how SocGen is doing.

There’s one final question I can’t seem to figure out: why the €8000 fine? Why not €8, or €800,000? Surely, if the two blogs did enough damage to warrant a fine to begin with, that damage should have been much much bigger than €8000? SocGen lost many billions in market value in Summer 2011. Or is it perhaps purely symbolic? But then €1 would have sufficed. Will it bankrupt Mish? I don’t think so, and neither does the AFM, I’m sure. Is the idea merely to annoy him, then? Mission accomplished. Or is it all a matter of principle? I wonder.