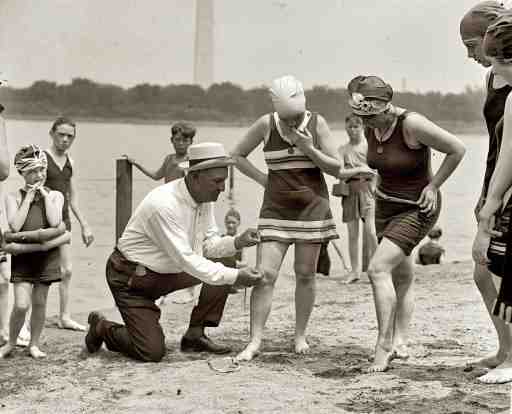 National Photo Co Six Inches of Relativity June 30, 1922 Washington policeman Bill Norton measuring the distance between knee and suit at the Tidal Basin bathing beach after Col. Sherrell, Superintendent of Public Buildings and Grounds, issued an order that suits not be over six inches above the knee

Stoneleigh: People often ask us which currency they should hold and whether or not we think the US dollar is about to plummet, so I thought it would be a good topic for a primer. Basically, the value of a currency can be looked at in two ways – relative to other currencies internationally and relative to goods and services domestically. It is the former that people are generally concerned about, but it should be the latter. Deflation is already outpacing the ability of central bankers and governments to ‘print money’ (monetize debt), and in a deflation, cash is king, relative to goods and services.

You need liquidity, and you need it in a form that will be accepted in your locality, whatever that currency is worth relative to others. As a fully liquid cash equivalent, you could also consider short term bonds (30-90 days) issued by your own government, as long as your government isn’t Zimbabwe or anywhere comparable.  Our horizons will contract drastically as we move towards a far more local world – a world where trading one currency for another might not be possible at all for most people. For most people, the time to think internationally is over. Credit expansion effectively shrank the world and turned it into a global village, but the world is about to get much larger again.

In the past, most people were born and lived and died all within about a five mile radius, and that is the world we are returning to. What good would a foreign currency be under those circumstances? If you are caught with foreign currency you can’t legally trade, you would lose either all or most of its value (depending on the availability of a black market, but that has its own risks). Also, in a world that will be increasingly jingoistic and xenophobic, with the unfolding of an inevitable blame game, holding foreign currency could also be construed as unpatriotic, and that could be dangerous.

If you have liquidity, then you will be able to purchase necessities, and also the hard assets you will eventually need. Deflation will force down the prices of almost everything, hence preserving your purchasing power now will give you options in the future that very few will have. All fiat currencies are eventually inflated away, and in this case that will happen once the credit bubble has finished deflating and the international debt financing model is well and truly broken. I would expect that to be quite some time, as deflation and depression are self-reinforcing, and during that downward spiral it will be impossible to inflate.

During the deflationary phase you will need liquidity, but once it is over you will need to switch to hard assets. I would suggest waiting for very substantial price falls in order to hang on to as much of your wealth as you can, but not to wait for the bottom. The risks of spending a lot of money when no one else has any will grow with time, and you will need time to climb the learning curve associated with any self-sufficiency assets you buy. My guess is that deflation could last for a number of years, and that the best time to shift to hard assets (from a purely financial point of view) should be at least a couple of years away. Others with more resources may make the shift sooner, knowing that they will lose money, but having the luxury of being able to do so in order to buy time to learn new skills.

As for the value of your currency relative to others, that is less important for ordinary people, but may be important for those who are lucky enough to have far more wealth to begin with. Deflation is currently pushing up the value of the US dollar on a flight to safety (temporary pullbacks notwithstanding), and we are on the verge of an unwinding of the yen carry trade, which should also increase the value of the yen substantially. I would expect the euro to fall (temporary rallies notwithstanding) as the internal pressures build in Europe, and currencies that were on the opposite side of the yen carry trade should also fall as the yen rises.

Commodity currencies should do poorly as commodity demand falls and global trade is greatly scaled back, but could recover if we see a supply collapse and commodity prices rise again. This would probably depend on the commodity in question. Beyond a certain point, however, I am expecting currency relationships to become very volatile, if not chaotic. We are likely to see a series of beggar-thy-neighbour competitive devaluations as countries attempt to secure an advantage for themselves, if only temporarily. Where many currencies are falling, relative value depends on which one falls the fastest, or where a perceived safe haven may lie this week. My guess is that we will move into this kind of environment within the next two years, and quite possibly sooner rather than later.

As bets on relative currency values form a large part of the derivatives market (along with interest rate bets), sudden bursts of volatility are likely to generate large losses that could further destabilize an already precarious situation. Betting on specific currency swings under such circumstances would amount to very aggressive gambling and is generally a recipe for losing your shirt. At some point we are likely to see a relatively sudden dislocation in the bond market as we see international borrowing become more difficult, with continuous bailouts making the bond market nervous. Essentially, bailouts will be overtaken by events. That would involve bond prices falling substantially and interest rates soaring – quite possibly into the double digits.

People frequently worry that this will be inflationary, but it would actually precipitate an enormous amount of deflationary credit destruction. Interest rates on all debts would rise with bond rates to crippling levels, leading to a huge wave of defaults. This would amount to hitting the ’emergency stop’ button on the economy, and is one reason we point out that holding debt can easily be financially fatal during deflation. In addition to a default tsunami, we would see governments cut back services drastically in order to reduce terribly expensive borrowing. This means being on your own in a pay-as-you-go world, which is why we emphasize the need for you to hold cash in hand. For many people, the only way to achieve no debt and cash in hand is to sell property and rent. For others, pooling resources may achieve the same thing.

Whatever the fate of the dollar relative to other currencies during a bond market crisis, its value relative to available goods and services domestically should still be increasing. Of course some goods may not be available at this point if they are sourced from abroad and trade has collapsed. There may therefore be some goods that would be worth purchasing at today’s prices, in order to secure items that could be very useful while all it takes is the internet and a credit card.

When we eventually do see inflation, it will not come from the initial havoc in the bond market, but from the aftermath of its destruction. Once deleveraging is over and countries must function in financial isolation, there will be nothing to prevent them from printing actual cash, as opposed to desperately trying to expand credit in a double-or-nothing gamble as they are currently doing. Down that road lies a currency hyperinflation on a Zimbabwean scale, but we are nowhere near that point now. You must survive deflation in order to have to worry about hyperinflation.