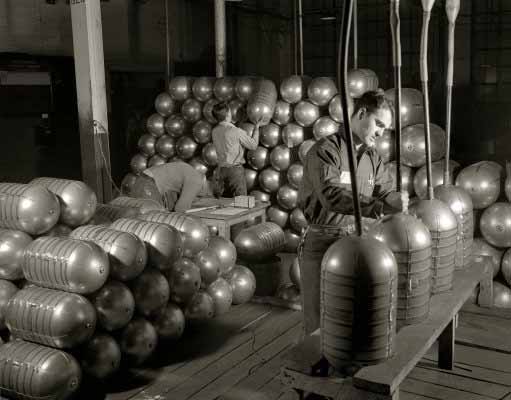 Alfred Palmer American Dream February 1942 Firestone Rubber, Akron, Ohio. Conversion of beverage containers to aviation oxygen cylinders. After shatterproof oxygen cylinders for high altitude flying have passed all tests in the metal division of a large Eastern rubber factory, hot air is blown through the cylinders to remove all trace of moisture. The cylinders are then sealed and stacked for painting

Stoneleigh: Since it is the major world conundrum with the shortest timescale, I usually focus on finance here, but alternative energy sources and power systems are my day job. Ilargi suggested that, in response to a question about the potential for renewable energy and electric vehicles (EVs), I write an article on the future of power systems.

With people hanging so many of their hopes on an electric future, it seems timely to inject a dose of reality. This is meant as a cursory overview of some of the difficulties we are facing with regard to electrical power in the future. The extraordinary technical and organizational complexity of power systems is difficult to convey, and there is far more to it than I am attempting to address here.

First off: As we are entering a depression, within a few years hardly anyone will have the money to buy an EV. Second: the grid could not come close to handling the current transportation load even if EVs could become common. An economy based on EV transportation would have to be fueled by base-load nuclear that doesn’t currently exist and would take decades to build, and no one builds anything in a depression.

What they do is mount a losing battle to maintain existing infrastructure and hope they don’t lose too much before better times return. This depression will last long enough that the infrastructure degradation will be enormous, even without the impact of above ground events resulting from serious societal unrest. Attempts at recovery after deleveraging are going to hit a hard energy ceiling. Power systems are critical to the functioning of a modern economy, but are almost completely taken for granted. That will not be the case in a few short years.

Here in Ontario, Canada (pop.13 million), the provincial government has just passed the Green Energy Act, and renewable energy proponents are queuing up to sign 20-year feed-in tariff contracts for power generation at a premium rate per kWh (varying by technology and reaching a maximum of 80 cents/kWh for small-scale roof-top solar).

The general assumption is that we are well on our way to building a future of renewable energy powered smart grids that will be able to accommodate not only our current demand, but much of our transportation load as well, thanks to EVs.

Unfortunately, much of this techno-positivist vision is nothing but pie-in-the-sky, thanks to the limitations of the electrical grid, as well as the low EROEI of renewable energy, the effect of receding horizons on the prospects for scaling up renewable energy development and the impending deflationary collapse of the money supply.

Investment in grid infrastructure, as with public infrastructure of most other kinds, has been sadly neglected for a long time. Much of the existing grid equipment is at or near the end of its design life, as are many of the power plants we depend on. (For instance, in Ontario we haven’t got around to paying for the last set of nuclear power plants we built, that are now approaching the end of design life and have had to be very expensively re-tubed in recent years.

The outstanding debt is some $40 billion, and the debt retirement charge we pay doesn’t even cover the interest.) Liberalization in the electricity sector has led to a relentless whittling away of safety margins in many places. Where we once had a system with a great deal of resilience through redundancy, that is generally no longer the case. In North America we now have an aging system with a very limited capacity for accommodating either new generation or new load, and we have great difficulty building any new lines.

As the power system was designed under a central station model to carry power in one direction only, with high voltage transmission and low voltage distribution, the modifications that would be required to enable two-way traffic, especially at the distribution level, are very substantial. Comprehensive monitoring and two-way communication would be required down to the distribution level, with central control (dispatchability, or at least the power to disconnect) of large numbers of very small generators.

The level of complexity would be vastly higher than the existing system, where there are relatively few generators to control in order to balance supply and demand in real time, and maintain system parameters such a frequency and voltage within acceptable limits.

The image above conveys by analogy the essence of power system frequency control – the easiest parameter to visualize. Frequency must be maintained at a set level by balancing supply and demand over the entire AC system. There are 4 such systems in North America – the east, the west, Texas and Quebec – and each functions as a single giant machine. The trucks in the image are generators and the boulder they tow up the uneven hill represents variable load. The trucks must pull the boulder at an even speed despite the bumps.

For a more accurate representation, one would actually need additional trucks, some moving at the same speed waiting to pick up a line if one should be dropped (spinning reserve) and others parked by the side of the hill (standing reserve). Some of the trucks would have to be able to start the boulder moving again from a standing start if it should stop for any reason (black-start).

We are looking at a world where there would be many more trucks, but each would be much smaller, and some of them would only pull if the wind was blowing or the sun was shining. The difficulty of the task will increase exponentially, and frequency management is only one parameter that must be controlled.

The mismatch between renewable resource potential, load and grid capacity is considerable. Resource potential is often found in areas far from load, where the grid capacity is extremely limited. Developing this potential and attempting to transmit the resulting power with existing infrastructure to where it can be used would involve very high losses. Many rural areas are served by low voltage single phase lines, and the maximum generation size that can be connected under those circumstances is approximately 100kW.

Even where three-phase lines exist, so that larger generators can be connected, carrying the power at low voltage is particularly inefficient, as low voltage means high current, and losses are proportional to the square of the current. Building high-voltage transmission lines to serve relatively small amounts of renewable energy would be an exceptionally expensive and difficult proposition, especially in a capital constrained future.

Renewable energy generation far from load could amount to little more than a money generating scheme, as a premium rate will be paid from the public purse for the time being, but little of the power might reach anywhere it could actually be used.

Difficulties occur when generation proposed would amount to more than 50% of the minimum load on the feeder. At this threshold, special anti-islanding measures are required that add considerable cost to the grid connection. In North America, we have large geographical areas served by a network of long stringy feeders with very low load. Adding much of anything to this system will be very challenging.

In much of Europe, where renewable energy penetration is relatively high, the population density is high enough to be served by a three-phase grid composed of relatively short feeders with high loads. Many of the limitations faced by North America simply do not apply in places like Germany, Denmark or the Netherlands. The North American grid has more in common with rural Portugal or the Greek Islands.

In this province alone, the amount of grid construction required in order to connect our renewable potential with load would cost tens, if not hundreds, of billions of dollars, and it would take decades to build. The cost of building, installing and connecting the necessary power generation equipment would also be enormous, and we would have to maintain at least some of the large plants needed for power system control and ancillary services (rapid load-following adjustments for frequency management, spinning reserve, rapid-response standing reserve, black-start capability, provision of reactive power etc).

This will be difficult as many large plants are due for replacement, large power plants take many years to complete, conventional fuels are depleting and capital will be very limited. While demand destruction will build in a temporary supply cushion, the lack of maintenance and new construction, which will inevitably follow a lack of funds, will take a huge toll in relatively few years. 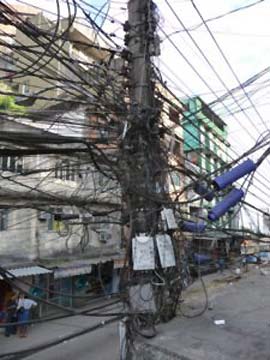 Far from a future of greater high-tech connectedness under a smart-grid model, where EVs would charge at night and cover both transportation needs and power storage, we are looking at a much more fragmented picture. We are very unlikely to see massive AC grids covering anything like the area they do now, and much less likely to see power carried over large distances.

Rural areas may well be cut off and will have to provide any power they need themselves (yet another example of the core preserving itself at the expense of the periphery). This will mean a drastic cut in demand to a third world level in many rural areas, and may lead to other areas with no power production, and no money to build any, being abandoned completely or reverting to a pioneer lifestyle. In urban areas, where dispossessed rural people migrate in very hard times, electricity provision in places down on their luck could look more like this picture of a favela in Rio de Janeiro. It’s a far cry from a neat and tidy high-tech vision of efficiency.

Home › Forums › Renewable power? Not in Your Lifetime