One foundational piece of advice here at TAE as been to get out of debt and stay of debt – not only because the monetary costs of such debt will grow, but also because debt can be used as a means of physical repression and enslavement. It gives public (government) and private institutions the sufficient amount of leverage they need to take control of both your possessions and your body, with the latter being a much more pronounced risk during a period of credit contraction. Here are a few snippets about this issue from Our Depraved Future of Debt Slavery (Part II):

If you are allowed to voluntarily downsize your living standards and retain some freedom of movement/action, then you are not really a slave. And that’s not meant to demean the existential struggle of the chronically unemployed and/or homeless people living on the streets or in the subway, whose numbers are bound to increase and many of whom will die of sickness, cold and hunger, but it’s hard to say that they are “attached” to our economic system of complicity and coerced participation. The most obvious way this slavish attachment forms is through personal debts/obligations.

That’s why it’s very important to pay off your mortgage(s), car loans, student loans, outstanding balances on past bills, etc., throw away your credit cards and generally avoid taking on debt at all costs. However, that is not a panacea for avoiding debt slavery by any means. One reason is that, as mentioned in Part I, creditors and third party debt collectors may literally conjure up debts for people who never agreed to take on those debts, by failing to account for payments, illegally jacking up interest rates, retro-actively inserting penalty clauses and other similar tactics. Or, they may simply doctor up brand new “contracts” that never existed.

Where can any of these people turn to for relief or protection? Can they seek help from their local police departments or court systems? Traditionally, those have been potential avenues for at least a modicum of justice. Soon, however, even these institutions will be well into the process of being privatized in the name of “fiscal responsibility” and “market efficiency”, which is really code for corporate control over all facets of the modern state. Wealthy corporate conglomerates will not only have seized the “power of the purse”, but also the state’s dispute resolution mechanisms and its monopoly to use coercion and violence in pursuit of vaguely-defined goals.

A recent article in the Daily Mail begins to paint the picture of how many Americans are already well within the confines of debt slavery, with almost nowhere or no one to turn to for help. It shows us how the American legal system is like a big glop of silly putty for the powerful institutions – it can be deformed, twisted and redesigned into almost any shape they desire. First, we hear the story of Lisa Lindsay – a breast cancer patient and survivor who was jailed over a $280 medical bill which was sent to her in error, since she had already paid it off.

Breast cancer survivor handcuffed and thrown in jail over a mistaken $280 medical bill as ‘debtor’s prisons’ return to the U.S

A breast cancer survivor who was sent to prison over a mistaken $280 medical bill has highlighted the return of debtor’s prisons in the U.S.

Illinois resident Lisa Lindsay had received the medical bill in error and was told she did not have to pay up.

However, the bill was turned over to a collection agency and state troopers arrived at her home and took her away in handcuffs.

The Illinois teaching assistant eventually had to pay more than $600 to escape prison, as legal fees were added to the bill.

‘I paid it in full so they couldn’t do it to me again,’ said Lindsay whose plight has alerted law-makers in Illinois to the growing problem.

The case of Lindsay as well as others suggests that more people than ever before in the U.S are being thrown in ‘debtor’s prisons’ for not being able to pay back loans.

So, first of all, Lindsay represents all the people out there who are being saddled with debts that they don’t even owe, conjured out of thin air. How many times have you heard of someone receiving a medical bill “in error”, or bills in general? Sometimes we are talking about honest mistakes by the institution involved, but it’s easy to see how this can be done intentionally for the benefit of private creditors, as well as a state/local governments that are primarily concerned with squeezing revenue from their citizens (Lindsay had to pay $600+ to make up for the $280 she never owed).

The second important thing to not here is the technical reason for why these people are being hauled off to jail for failure to pay debts. It is NOT because failing to pay a debt is a jailable offense – in fact, the Supreme Court has ruled that it is unconstitutional for the state to imprison people for civil debts (especially those who cannot afford to pay). What is happening here is that people are being jailed on contempt of court rulings due to their failure to appear at judicial hearings and/or violation of court orders. We see how this works with the story of Jack Hinton:

Disabled roofer Jack Hinton sat in jail until he could come up with $300 on a debt he owed a lumberyard.

According to a hearing transcript, a central Illinois judge listened to Hinton’s story, noted he’d recently been paid after finishing a roofing job, and said: ‘Mr. Hinton, you had $1,000 in your pocket, you chose to spend it elsewhere in violation of the court order. That lands you in jail.’

Hinton’s wife took out a loan to buy his freedom. Her $300 went to the debt collector.

Debt collectors have become so aggressive claim some that poor people who are behind on payments of as little as $25 a month are being sent to jail.

Even though debtor’s prisons have been illegal since 1833, lenders are being accused of exploiting legal loopholes to have their borrowers found and sent to jail until they pay up.

Acting within the law, debtors aren’t arrested for nonpayment, rather for failing to arrive to court hearings thereby falling foul of contempt of court laws.

This results in a police arrest warrant being issued for ‘failure to appear’, the debtor is tracked down, packed off to jail and can only get out by paying the set bail bond which of course matches the amount owed. 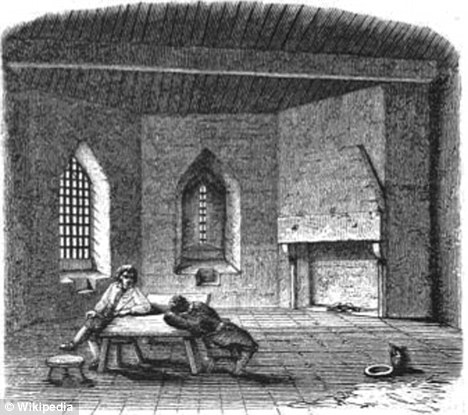 Indeed, it is extremely easy for creditors and third party debt collectors to engage in these work-arounds with the complicity and the resources of the state. The only thing these collection agencies are required to do is file a complaint in court, give the defendant “notice” (via mail) and post an attorney in the courthouse, who will sit back and wait to see if the debtor shows up. If they never receive a copy of the complaint and the summons, or they are simply unable to show up for court, then the creditor gets a default judgment and every available taxpayer-funded means at their disposal to enforce it.

If they do manage to show up, then the creditor will most likely get a judgment anyway, including court costs and interest. Technically, the burden of proof for establishing the existence and the amount of the debt is on the plaintiff, but practically it ends up being on the defendant, who will not have counsel in a civil proceeding. At this point, the new class of alleged debtors have pinned all of their hopes on state legislatures reacting quickly and swiftly to close the various loopholes and provide them with the slightest degree of protection (I wouldn’t hold my breath).

And now some state legislators are trying to plug this loophole by making court notices be served in person rather than mail, arrest warrants to expire after a year and the bail bond returned to the debtor not the lender

In fact in Illinois alone, legislation designed to plug loopholes aimed at debtors is waiting to pass through the state senate.

‘Creditors have been manipulating the court system to extract money from the unemployed, veterans, even seniors who rely solely on their benefits to get by each month,’ said Illinois Attorney General Lisa Madigan last month in a statement voicing support for the legislation.

‘Too many people have been thrown in jail simply because they’re too poor to pay their debts. We cannot allow these illegal abuses to continue.’

A 2010 report by the American Civil Liberties Union that examined five states – Georgia, Louisiana, Michigan, Ohio, and Washington — discovered that people were being imprisoned at ‘increasingly alarming rates’ through legal debts.

Some of the examples cited included a woman who arrested four individual times for failure to pay $251 in fines and costs related to a fourth-degree misdemeanor conviction.

Another example that the ACLU used was of a mentally ill juvenile imprisoned by a judge for a conviction for stealing school supplies.

‘The sad truth is that debtors’ prisons are flourishing today, more than two decades after the Supreme Court prohibited imprisoning those who are too poor to pay their legal debts,’ said the ACLU.

‘In this era of shrinking budgets, state and local governments have turned aggressively to using the threat and reality of imprisonment to squeeze revenue out of the poorest defendants who appear in their courts.’

As made clear in my series on debt slavery, the truth is that most state governments are a) complicit in the process of debt enslavement and b) unable to do much about it, anyway. These states rely heavily on the federal government for funding, especially in recent years as their public finances have collapsed, and the Feds have never been hesitant to lace those funds with strings. On top of that, the federal government can simply supersede state laws in this area by making issues related to debt forgiveness a federal concern, under the guise of interstate commerce or “national security”, and invoking the supremacy clause.

The point is that this form of debt slavery will be a very real risk for people in upcoming years, and only has the potential to get much worse before it gets any better. It is especially a risk for those with limited means and/or unserviceable debts, but the people with sizable assets and relatively few debts can fall victim as well. This is not an issue of what people rightly owe to other parties, but rather of how much labor and surplus wealth can be extracted from a formerly wealthy population by any means necessary. While we can justifiably expect that this wealth conveyor will break down in the future, along with the associated risks of debt slavery, we should also remember that it will not disappear overnight.