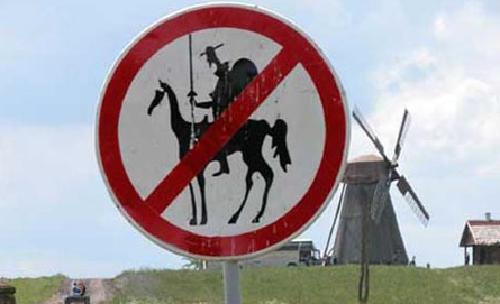 One day after the EU finally sanctioned the €100 billion bailout for Spain's banking system, for which the sovereign will remain on the hook, according to German finance minister Schäuble, who said there was no way the banks would be bailed out directly, developments were fast and furious.

A second remark by Schäuble may yet come back to haunt him.

"There is absolutely no reason to speculate, beyond this (bank aid) application, about a comprehensive aid program for Spain," German Finance Minister Wolfgang Schaeuble was quoted as telling the daily Rheinische Post. "Spain really does not need that," he added.

First off, Madrid announced a bailout of its own: a €12-18 billion fund (€6 billion will come from a loan taken out by the national lottery) to help its regions. Which, finance minister Luis de Guindos swore, would not make sovereign debt any higher. Does that mean Spain still has cash lying around somewhere? And if so, why the bank bailout? Or is de Guindos simply telling another hopeful lie and are additional bond issues on the horizon?

The region of Valencia didn't waste any time in claiming it will seek money from the regional fund. It won't be the last. In fact, it's hard to see how the fund could be large enough. The regions need to rollover some €15 billion in existing debt in Q2 2012 alone. And they have zero access to international markets left.

Next, Madrid revised a bunch of numbers downward. Angeline Benoit and Charles Penty for Bloomberg:

Gross domestic product will fall 0.5% in 2013 instead of rising 0.2% as the government predicted April 27, Budget Minister Cristobal Montoro said after the Cabinet met today in Madrid. The government will spend €9.1 billion ($11 billion) more paying interest than in 2012, he said. [..]

“I don’t want to send too soothing a message, everyone has to comply,” Montoro said even as he denied Valencia has called for an intervention. Montoro said the central government is reviewing regions’ budget plans after announcing last week that several aren’t on track to meet this year’s deficit target.

The economy returned to recession last year and unemployment is surging after the collapse of the real-estate boom. The economic outlook is worsening as the government implements 110 billion euros of measures over three years to cut budgets, raise taxes, shrink public wages and charge more for education and health care. [..]

The spending limit for 2013 will be €126.8 billion, 9.2% higher than a year earlier, Montoro said. Stripping out the interest costs and contributions to the welfare system, the spending ceiling will fall 6.6% from 2012, he said.

Expect lots of protests. From AFP:

The protest was one of over 80 demonstrations called by unions across the county against civil servant pay cuts and tax hikes which drew tens of thousands of people, including police and firefighters wearing their helmets. "Hands up, this is a robbery!" protesters bellowed as they marched through the streets of the Spanish capital.

At the end of the peaceful protest dozens of protestors lingered at the Puerta del Sol, a large square in the heart of Madrid where the demonstration wound up late on Thursday. Some threw bottles at police and set up barriers made up of plastic bins and cardboard boxes in the middle of side streets leading to the square and set them on fire, sending plumes of thick smoke into the air.

Riot police then charged some of the protestors, striking them with batons when they tried to reach the heavily-guarded parliament building. The approach of the riot police sent protestors running through the streets of the Spanish capital as tourists sitting on outdoor patios looked on.

The protests held Thursday were the latest and biggest in an almost daily series of demonstrations that erupted last week when Prime Minister Mariano Rajoy announced measures to save 65-billion euros ($80-billion) and slash the public deficit. Among the steps is a cut to the Christmas bonus paid to civil servants, equivalent to a seven-percent reduction in annual pay. This came on top of a pay cut in 2010, which was followed by a salary freeze.

"There's nothing we can do but take to the street. We have lost between 10 and 15 percent of our pay in the past four years," said Sara Alvera, 51, a worker in the justice sector, demonstrating in Madrid. "These measures won't help end the crisis."

The Madrid stock exchange fell 5.82% today. Its 10-year yields are at 7.20%. Nice numbers to go into the weekend. Spain will need a bailout real soon, or default. So will Italy, with a 4.38% stock exchange drop and a 6.13% 10-year yield closing out this Friday. And yes, we've seen similar things before, and things still look sort of normal, familiar.

But it gets real hard now to see what else Europe can do amidst all its self-enforced constraints on both financial and legal issues. The markets are not letting go, if anything they're tightening their squeeze. Spain managed to sell bonds this week, but it did so at rates it can't afford. Nor can Italy afford to pay over 6%. Both countries will increasingly try to sell shorter term debt, but there's no hosanna in that either.

The hands-down quote of the day comes from Italian PM Mario Monti:

"It’s difficult to say to what extent the contagion comes or came from Greece, or from Portugal, or from Ireland, or from the situation of the Spanish banks, or of the one apparently emerging from the streets and the squares of Madrid," Monti told reporters. "Obviously, without the problems in those countries, Italy’s interest rates would be lower."

That is priceless. It's the others. L’enfer, c’est les autres. Brilliant, when you think about it; it's right up there with Schäuble claiming Spain doesn't need a sovereign bailout. Denial right up until you hit the wall. Or it hits you. Whichever comes first.

Does Europe still have weapons left? Well, it can lower its interest rates to minus 1-2%. It can lower ECB reserve rates into negative territory, so banks won't park their money there anymore. But they won't put it back into the economy instead, as would be the hope, they're not certified nuts yet; they'll move it to the US or Switzerland or something.

The battleship Europa is very close to being shattered on the cliffs. And we need to seriously wonder how much longer the Euro has to live, let alone the eurozone.

And the consequences for the rest of the world? This graph from Lance Roberts, which compares S&P 2011 with S&P 2012, provides a solid clue. And it could be just the beginning. 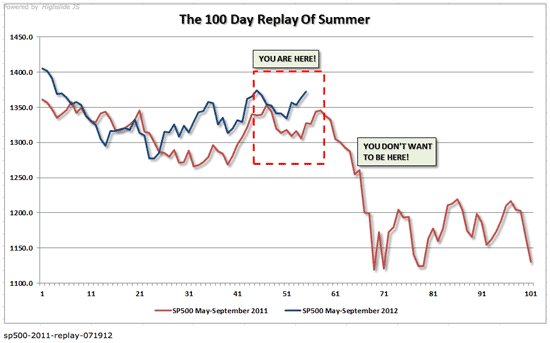 Expect Spain to restructure its debt. And contagion to turn into domino.