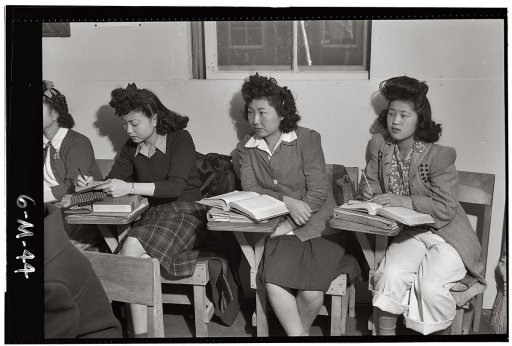 Japanese school at Manzanar War Relocation Center, CaliforniaLet’s see if I can keep this nice and short: in my view the article below from Reuters correspondents Yoshifumi Takemoto and Yuko Yoshikawa, while looking innocent enough at first glance, in fact borders on nonsensical disinformation.

The background is familiar: Japan has been in deflation for decades, falling prices, falling wages, falling spending (velocity of money). Then recently, Shinzo Abe became PM and started spending big time (Abenomics), in yet another attempt to halt the deflation. And then today we read this:

Japan is considering $50 billion in economic stimulus to cushion the blow of a national sales-tax increase that is meant to rein in the government’s massive debt, people involved in the decisions said on Thursday.

Prime Minister Shinzo Abe is set to raise the tax to 8% from 5% in April, rejecting calls by some advisers to delay or water down the fiscal tightening in order to keep the economic recovery on track.

The tax hike is the biggest effort in years by the world’s third-largest economy to contain a public debt that, at more than twice the nation’s annual economic output, is the biggest in the world.

But Abe has said he must balance the long-term need to balance the budget against his top priority of breaking Japan free from 15 years of deflation and tepid growth. To offset the drag from the tax increase, Abe this week instructed his government to craft a stimulus package by the end of the month.

One option is a spending package worth 5 trillion yen ($50.01 billion), one of the sources said. The government estimates that each 1 percentage point rise in the tax will generate roughly 2.7 trillion yen in revenues.

Chief Cabinet Secretary Yoshihide Suga said Abe has not yet decided on the tax increase, a move expected on October 1 after a key survey of business sentiment from the Bank of Japan. Suga, the top government spokesman, said Finance Minister Taro Aso and Economics Minister Akira Amari will work out the size and contents of any package.

Aso’s ministry, concerned about getting Japan’s finances in order, is a strong proponent of the tax increase and wants to minimize any further spending. Amari has said the economic package must be bigger than 2 trillion yen to avoid an economic relapse.

The prime minister has been proceeding cautiously since many politicians blame the last sales-tax hike, in 1997, for plunging the country into recession. The economy has improved smartly since Abe came to office in December on a platform of fiscal stimulus, monetary easing and growth-promotion measures, but the rebound remains fragile.

With a big upward revision to second-quarter GDP this week and the feel-good boost of Tokyo winning the right to host the 2020 summer Olympics, “the justification for delaying or changing the tax hike disappeared,” one source said.

Political leaders from a spectrum of parties agreed last year to double the sales tax to 10% in two stages by October 2015. But the law requires the government to certify that the economy is strong enough to weather the drag from the tax hike.

For starters, it’s of course kind of funny to see that the Finance Ministry wants to “minimize any further spending”, while the entire Abenomics idea is based on spending more, and everyone recognizes that “the rebound remains fragile”. But that’s not what irks me most.

If you look through the numbers here, you see that the tax hike from 5% to 8% is supposed to bring in 3 times 2.7 trillion yen, or 8.1 trillion yen, about $81 billion. Abe wants to spend $50 billion of that on more stimulus, so net revenue is $31 billion. This is ostensibly “meant to rein in the government’s massive debt”. However, according to Wikipedia, Japan’s public debt was over 1,000 trillion yen, or $10.46 trillion, for the first time ever on June 30, 2013 (“twice the nation’s annual economic output”).

Which raises the question how on earth $30 billion can “rein in” a debt of $10.46 trillion. If I’m not mistaken, that comes to just 0.28%. Maybe something got lost in the translation of the term “rein in”, but even then. Note: the article calls it “the biggest effort in years by the world’s third-largest economy to contain [the] public debt”.

And sure, there’s a little more in the pipeline. If I may quote Wikipedia again: “In order to address the Japanese budget gap and growing national debt, in June 2012 the Japanese diet passed a bill to double the national consumption tax to 10%. The new bill increases the tax to 8% by April 2014 and 10% by October 2015.” So yeah, maybe the tax hike increases revenue by 0.5% of public debt or so 2 years from now. Big whooping deal.

You know what I thought, right off the bat, even before I’d seen the exact numbers, and what I think even more now that I’ve seen them? That a higher sales tax may not have much noticeable effect on public debt, but that it does have such an effect on inflation numbers. Well, at least the faulty ones everybody likes to use.

If deflation in Japan ranks somewhere in the 2% per year range, a 3% across the board sales tax increase sounds like a gift from heaven for Mr. Abe. As long as he can count it towards Japan’s inflation numbers.

The problem with that it it’s silly. And wrong. Because if you do that, and make no mistake, it’s generally accepted to do it, any government on the planet could solve inflation and deflation problems by simply raising or lowering taxes. If this were true, every government through history would have tried that, and twice on Sunday. The reason it does not work is the same reason why “cost of living” numbers or rising consumer prices do not tell you what a nation’s real inflation is.

Inflation and deflation are defined by rising or falling money and credit supply multiplied by the velocity of money. If you can’t raise the velocity of money, i.e. you can’t force people to spend more, you have no real control over inflation/deflation. If the Japanese people pay for that tax hike by spending less elsewhere, as a government and a central bank you’re stuck. Japan’s successive governments over the past 20-30 years can tell you all about it. And they haven’t succeeded in getting people to spend more in decades (not for lack of trying), so why should they this time around?

Still, that obviously doesn’t keep Abe from performing his sleight of hand, nor the media from reporting on it as if it were what it is not. But at least you know now. Japan’s sales tax hike has hardly any effect on public debt (which in itself is a very strong indication of how huge the debt really is, if that wasn’t clear yet), but it does push up inflation, provided you get everyone to use the faulty “cost of living” definition of it. And then, if you’re Shinzo Abe, you – at least temporarily – get to look like a very smart man, able to solve the deflation problems your nation has suffered for a long time. Even if that’s not at all what you actually do. Politics equals Kabuki.

Home › Forums › How Japan Pretends To Fight Debt And Deflation, But Doesn’t