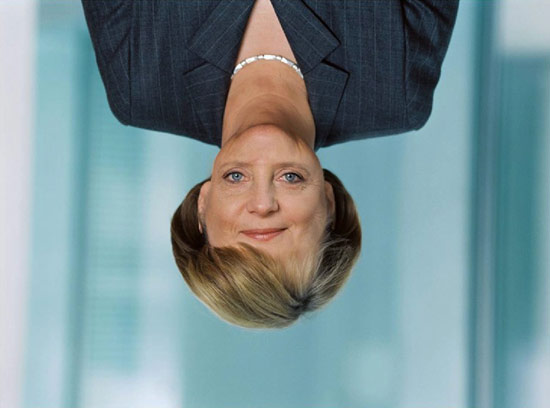 Oh come on, leave the girl alone already. First off, all those people talking about a solution for the eurozone need to finally understand there ain't no such thing. And whatever slim chance of a solution the most optimistic – delusional – among them may be so desperate to cling on to, at least they should recognize that Angela doesn't hold the keys to the city. She herself knows it: she's just another gal knocking at the gates, even if she's dressed as the empress.

A thought experiment: how would you solve the euro crisis if Germany were not part of the equation? If you would have to put the de facto German contribution to the puzzle at zero, neutral? What would you be left with then, and what steps would have to be taken to come to a solution? If the sole remaining big players were, let's see, France, Spain and Italy?

That changes the picture, doesn't it? Take Germany out and all you're left with is pretty much roadkill. Plus a motley crue of comparatively small barely breathing rodents like Holland, Finland and Austria.

See? With bailouts for Spain and Italy now all but inevitable, if you leave Germany out of the picture for the moment, you're left with no-one at all to pay for those bailouts. Not even a complete and immediate move towards a fiscal, banking and political union would do anything to resolve Europe's financial quagmire if Germany is not present.

In other words: it all comes down to Germany. Berlin is on the hook for everything. The required funding for the EFSF and ESM emergency funds would, with Spain and Italy moving into roles as debtors instead of creditors, have to come from Germany to the tune of what would fast approach 50% or so.

Does anyone think that is realistic? That Germany can make the markets truly, as in for more than a day or so, believe it has that kind of money lying around, and is wiling to gamble it? Or is it perhaps more likely that, if the Germans would even try it, the markets would turn on Berlin the next morning? If you look at bunds right now, there's no doubt they're perceived as a safe haven. But what are the chances that perception would last if Merkel agreed to take on the Savior Of All Of Europe part?

Berlin still hasn't even ratified the ESM, even though there allegedly was a deal at the – umpteenth – summit last night to broaden its powers to include bailing out banks directly. All this great stuff that made Spanish and Italian 10-year yields go down a bit for a few hours is contingent on Germany ratifying the ESM, and all other eurozone countries agreeing on a banking union sometime around Christmas this year at the earliest, a banking union that may well require a number of individual countries to change their constitutions.

That's the kind of thing that takes years, if it happens at all. So at least for now, Germany didn't commit to much of anything at all.

There have been scores of pundits blaming Merkel for not being strong enough, for prolonging the crisis with her indecisiveness, that sort of claims. Thing is, Angela Merkel may well be the by far cleverest party in all of it.

Demanding a banking union as a firm condition for both a German ratification of the ESM, and for extending its powers, sounds good. So does giving up preferred creditor status. Hence the temporarily lower yields. And there will be many claims going forward that Germany wants nothing less than to use its leverage to gain complete control over the eurozone.

And granted, of course there are German politicians who dream of just that. But I doubt Angela Merkel is one of them. She's been looking at the books for a while now, along with her own handpicked advisers, like Wolfgang Schäuble. They know the extent of double and triple bookkeeping in Greece, Spain and Italy. And therefore they know that trying to rule over Europe is not the way to go.

Apart from all the political-cultural-constitutional traps involved, and there are too many to count, multiplied by 17, there is the simple fact that Germany can't afford to backstop all the sovereign and banking losses involved. Germany learned a hard lesson from the reunification with eastern Germany 20-odd years ago. It's still learning that lesson.

If Merkel would entertain thoughts about extending German political power over its neighbors at all, and I doubt it, she would also be smart enough to understand that the present time is not the right time to do it. In the not too distant future such power would come much cheaper, if and when Spain and Italy, and who knows who else, have defaulted and had their sovereign and banking debts restructured.

If it were to jump in now, Berlin risks losses so severe it would itself be put into a place so hard it would be hurt badly. If instead it were to take a step back and "let nature take its course", things might be much less painful.

Such a collapse would hit Germany hard, absolutely, though not as hard as many other countries. Taking on trillions of euros in additional debt from Italy and Spain, however, would risk making that hit much harder. So why would Angela go that route? It makes little sense.

The claims that she gave in last night are greatly exaggerated. She promised hardly anything. The ESM, which she has yet to ratify, can start bailing out banks directly, but only if and when there's a firm commitment by 17 different countries to a landshift banking union in place. Which would take away a lot of sovereign power from all 17 countries, something that's set to be an ever stronger point of contention and discontent. Europe's not ready to relinquish such powers, be they political, financial or cultural. In fact, most countries are moving towards increased protection of their sovereign identity, not giving it up.

What the EU summit will prove above all to those willing to listen is that the respective interests in Europe are diverging more and more, and agreements are further away than ever, especially if they're far-reaching.

Angela Merkel is the first one to realize this. Not the last, as many voices seem to think or even hope for.

There is perhaps one caveat: German banks. But they would be hit no matter what happens. And both they themselves, and Merkel, have now had quite a bit of time to prepare for all possible outcomes. If Angela Merkel is half as smart as she appears to be, she's ready for about all of them.

Meanwhile, she plays the part of one who's falling behind and doing all sorts of things against her will. She may just be playing a lot of you for fools. She may also be ready to make her big next move as soon as she sees fit. Which would explain why she doesn't care any longer about leaving the impression that she's giving in to some demands, even if they're bound to be fought over at home. After all, why worry about making a few promises if you know you will never have to keep them?

Home › Forums › Angela Merkel is Playing You For Fools