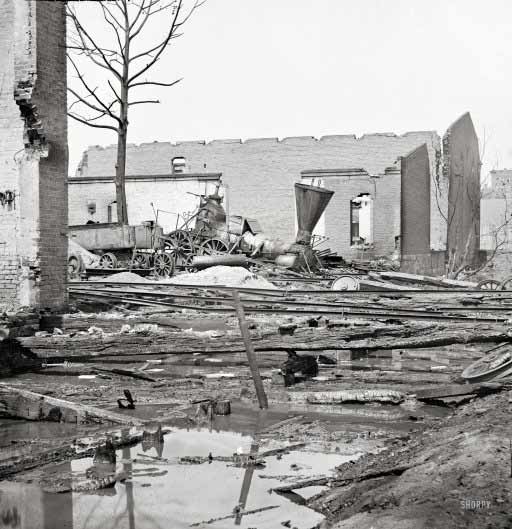 Unknown Aftermath April 1865 “Richmond, Virginia. Destroyed Richmond & Petersburg locomotive.” Aftermath of the Confederate evacuation in which Richmond’s business district, accidentally torched by its own citizens, burned to the ground, the flames extinguished only with the aid of the occupying Federal Army

In response to the latest suicidal austerity demands of the Troika hit squad, protestors in Greece burned a German flag while the Greek daily paper Dimokratia adorned its front page with the headline, “Memorandum Macht Frei” [memorandum makes you free]. These elements of the populace are unsurprisingly reacting to the fact that bureaucrats in Washington, Berlin and Brussels are signing away the living standards of the Greek people while telling them that it’s all being done for their own good and is absolutely necessary for peace and prosperity in Europe.

Ambrose Evans-Prichard pointed out in a recent blog post that the Troika’s plans for Greece are far worse than what was demanded of [or offered to] Germany after the second World War, and much more similar to what was demanded of it after the first one (we all know how well that worked out). In 1953, the Western powers granted Germany 50% relief on its external debts with very few conditions attached, and now Greece is struggling to get that same amount with absolutely impossible conditions attached.

The main reasons for this difference in treatment are a) Greece is not nearly as strategically important to these Western capitalist powers as Germany was back then and b) the financial elites simply cannot afford to create a precedent of debt forgiveness in the current environment of unprecedented public and private debts. What is perfectly clear, though, is that the continuously shape-shifting complex of bailout, haircut and austerity measures advocated for Greece have been destined to fail since they were first conceived.

The EU deal will in theory cap Greece’s public debt at 120pc of GDP in 2020 – at the outer limit if viability – after eight years of belt-tightening and depression, if all goes perfectly.

Since nothing has gone to plan since Europe’s austerity police began to administer shock therapy eighteen months ago, even this grim promise seems too hopeful.

The Greek economy was expected to contract by 3pc in 2011 under the original EU-IMF Troika plan. In fact it shrank by 6pc, and is now entering what the IMF fears could become “a downward spiral of fiscal austerity, falling disposable incomes, and depressed sentiment.”

Manufacturing output fell 15.5pc in December. The M3 money supply crashed at a 15.9pc rate. Unemployment jumped to 20.9pc in November, up from 18.2pc the month before, and is already above the worse-case peak pencilled in by the Troika.

Some 60,000 small firms and family businesses have gone bankrupt since the summer, the chief reason why VAT revenues dropped 18.7pc in January. The violence of the slump is overwhelming the effects of fiscal retrenchment. So much Sisyphean effort for so little gain.

You can argue that Greece has dragged its feet on EU-IMF demands – though the IMF is careful not make such a crude claim, offering mixed praise in its last report.

But as Professor Vanis Varoufakis from Athens University says: “If we had better implemented the measures, the worse it would be: the economy would be comatose, and the debt-to-GDP ratio would be even more explosive.”

So yes, like Germany accepting the terms of the Carthaginian Peace with a gun to its head in 1919, Greece signed “an insincere acceptance of impossible conditions” – to borrow from Keynes – hoping that sense would prevail with time.

But now that politicians from nearly all parties in the Greek Parliament have once again passed a ruinous fiscal austerity package (most likely without bothering to read it), as both the technocratic leader Papdemos and the “opposition” leader Samaras warned that all hell would break loose if they voted against it, the people of Greece and of the world should rid themselves of any misplaced anger and remember where all the wealth is really going – supranational bankers and corporate elites.

Bureaucrats and politicians in Athens are just as complicit as those in Berlin and in Washington, and they are all serving a higher master. It’s not the German people who are benefitting, and, in fact, they are also paying a very hefty price to keep an impossible currency union in one piece. Through the IMF and EU bailout mechanisms, Germany has already sunk tens of billions of euros into Greece for no benefit whatsoever, except buying some time for “firewall” protections from financial contagion (i.e. the ECB’s LTRO).

Even that temporal benefit is very close to running out, as German politicians have reached the point where they may be upping the ante so high that the current bailout and austerity plans will be stopped dead in their tracks and Greece is forced to leave the Eurozone (of their own volition, of course). The tone of Merkel’s administration has noticeably shifted towards strong implications that nothing Greece does will be good enough anymore. German Finance Minister Wolfgang Schauble said on Friday that “we can’t keep sinking money into a bottomless pit”.

The policy cannot command democratic consent over time. The once dominant Pasok party has collapsed to 8pc in the polls. Support is splintering to the far Left and far Right, just like Weimar Germany under the Bruning deflation.

The next Greek parliament will be packed with “anti-Memorandum” fire-breathers, and any attempt by Greek elites to prevent elections taking place must push street protests towards revolution.

In a sign of things to come, the Hellenic Police Federation has called for the arrest of Troika officials on Greek soil for attacks on “democracy and national sovereignty”.

It is clear that Germany’s finance minister Wolfgang Schäuble wishes to expel Greece from the euro, calculating that Euroland is now strong enough to withstand contagion, and that the European Central Bank’s `Draghi bazooka’ for lenders has eliminated the risk of a financial collapse.

Schauble’s mindset and motive are much less than pure, but he is right – Greece cannot survive in the Eurozone without any bailouts or austerity, and it can’t survive with them either. Even the most measly sums of bailout money that have already been authorized to be used for the Greek people are not being delivered to them, because the Greek government is having trouble “absorbing” the funds. English Katherimini reports:

Delays in Absorption of EU Funds

The European Commission is closely monitoring 181 projects in Greece, for which some 11.5 billion euros will be dispersed. While much of this money is going toward infrastructure schemes, 4.3 billion euros is being allocated through the European Social Fund for projects to help with employment.

However, Kathimerini understands that of these 4.3 billion euros, more than 1.1 billion has not yet been absorbed despite the unemployment rate surpassing 20 percent in November. The schemes are meant to be overseen by the Education and Labor ministries but they are finding it difficult to get the projects off the ground.

The Labor Ministry says that the schemes it is responsible for were to be run by the OAED employment organization, but sources said that it is too weighed down at the moment dealing with the rapidly increasing number of unemployed Greeks. The total figure of Greeks without jobs passed the million mark in November.

As for the Education Ministry, sources said that staff shortages are making it difficult for officials to plan the programs that will absorb the EU structural funds which Brussels has made available.

The Germans must look at that and correctly assume that there is absolutely no reason for them to continue backstopping these funds for Greece, which is implicitly a bill for the rest of the EU periphery as well. They may have greatly benefitted from the all-consuming debt slaves of Southern Europe in the past, but not any longer. The only clear and efficiently carried out purpose of the bailout measures is keeping the major banks solvent as they scatter toxic assets across the smoldering remains of European and American taxpayers, and as their executives and directors continue to receive outrageous levels of compensation for nothing but negligence and fraud.

All of the major western banks are given access to virtually unlimited cheap credit at their respective central banks through ZIRP, discount loans, LTRO, etc., while the average citizens and small businesses have seen access to affordable credit plummet for years now. Thousands of these businesses, which actually have the capacity to hire workers, go bankrupt every month, while the major banks are kept out of bankruptcy proceedings at all costs. In the meantime, they can fraudulently foreclose on your home and settle any and all litigation surrounding the issue out of court in one fell swoop.

On top of that, many European banks have been at least partially nationalized and therefore have explicit guarantees from their respective governments, while those other wholly-private fat cats have to make do with only implicit guarantees. Why should the banks even care about taking a 50-70% haircut on the value of Greek bonds when the bailout funds will be directly transferred to them, their governments will be on the hook for any capital shortfalls and they can post all manner of toxic waste to the ECB as collateral for unlimited 3-year funds? These are the true perpetrators of mass injustice and exploitation in our system; our urban and suburban consumer complexes are their concentration camps.

They are the only ones who stand to gain from the systematic gutting of social safety nets and the imposition of slave wages across Europe and North America. Everyone else, including the Greeks, the Germans, the French, the British, the Americans, etc. stand to lose and lose big. The Greek people, especially, are now at a very important crossroads that will be difficult to navigate. They must stand up against the degrading farce that took place tonight in Athens behind closed doors, but they must also refrain from being swept up into anti-German, reactionary fervor. At the end of every painstaking day, only recognizing the true nature of collective oppression can make you free.