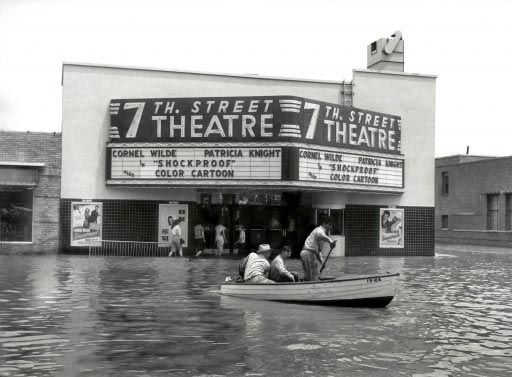 First of all: the answer to the title question is, as far as I can see: no. But it's almost certainly a whole lot more than the $50 billion reported today, and that $36.5 trillion amount doesn’t come from thin air; it appears in a number of news articles about Sandy. All in all, the story raises a few more questions, allows you to play with a bunch of numbers, and leaves you puzzled, amazed and at times easily bewildered.

Here’s how: One of many things flooded by hurricane Sandy last week was a bank vault below 55 Water Street in Lower Manhattan. At first glance nowhere near the most interesting news coming out of the storm aftermath, since it doesn't involve human lives lost, or people losing their homes. Still, given the potential amount of damage in dollar terms, it does warrant a second look.

The vault in question belongs to the Depository Trust & Clearing Corporation or DTCC, a clearing house for Wall Street firms, owned by Wall Street firms. On its own website , the DTCC describes itself like this:

DTCC, through its subsidiaries, provides clearing, settlement and information services for equities, corporate and municipal bonds, government and mortgage-backed securities, money market instruments and over-the-counter derivatives. In addition, DTCC is a leading processor of mutual funds and insurance transactions, linking funds and carriers with their distribution networks.

DTCC's depository provides custody and asset servicing for more than 3.6 million securities issues from the United States and 121 other countries and territories, valued at US$36.5 trillion.

In 2010, DTCC settled nearly US$1.66 quadrillion in securities transactions.

A number of things here: it's easy not to realize that if 3.6 million securities are valued at $36.5 trillion, each of these pieces of paper is on average worth over $10 million. Not exactly your average pieces of paper. Also, in what way or fashion DTCC serves as a clearing house for OTC derivatives is an interesting little riddle, but not one we can expect to get an answer to. Still, something has to drive up that average value, and stocks or bonds are not prime candidates for that role.

It’s also easy to overlook the fact that storing 3.6 million pieces of paper, certainly in a way that makes them easily retrievable, requires a huge amount of space. You can't exactly just stack them one on top of the other.

Back to Sandy. It flooded Lower Manhattan, including the bottom floors and basement at the DTCC building. And improbable as it may seem, and while DTCC reported having "sealed" the vault, apparently it's not uncommon for bank vaults to focus on break-ins, but not on water damage.

Which leads to this, as reported by CNN:

Trillions of dollars worth of stock certificates and other paper securities that were stored in a vault in lower Manhattan may have suffered water damage from Superstorm Sandy.

The Depository Trust & Clearing Corp., an industry-run clearing house for Wall Street, said the contents of its vault "are likely damaged," after its building at 55 Water Street "sustained significant water damage" from the storm that battered New York City's financial district earlier this week.

The vault contains certificates registered to Cede & Co., a subsidiary of DTCC, as well as "custody certificates" in sealed envelopes that belong to clients.

[DTCC Chief Executive Michael Bodson] said the DTCC's computer records are intact and that the corporation has "detailed inventory files of the contents of the vault."

The building remains inaccessible, but the lower floors are believed to be flooded. The full extent of the damage cannot be assessed until power is restored and the building is deemed safe to enter.

Well, we know a bit more, but it would be nice to shine a little more light on the situation, and especially the damage incurred. For instance, we don't know yet what percentage of the 3.6 million securities were stored in the vault in question. Or what the damage actually consists of when, if we are to believe the CEO, detailed computer records of the papers and inventory files of the vault exist. The Financial Times has this:

Trillions of dollars of stock certificates are feared ruined after Hurricane Sandy flooded a vault at the Depository Trust & Clearing Corp, the Wall Street-owned organization that manages important parts of the U.S. trading infrastructure.

The DTCC houses 1.3 million paper certificates for shares, bonds and other financial instruments, including foreign securities, at the organization's headquarters in Manhattan’s financial district.

[..] the DTCC admitted on Thursday that its vault remained underwater and officials had still not been able to assess the damage. “The building itself remains inaccessible and will be until power is restored and an on-site health and safety inspection can be completed,” it warned in an email alert to its clients. It has suspended processing of physical certificates for an indefinite period.

Adding to the confusion, the DTCC also said that it was still trying to track down certificates that were in the mail over the period of the storm. Couriers are experiencing disruptions of their own and could take several days to reroute deliveries to DTCC’s alternative sites.

A spokeswoman added that it had electronic records of all the certificates, which could be reissued. “Hindsight is 20/20. We have taken a lot of precautions, in terms of protection both for the security of our systems and of our records, and we have a full inventory of the certificates, as well as a robust recovery plan.”

Right. The DTCC was reopened for business almost immediately, or the world of finance probably would largely have come to a standstill. But it is "open" only electronically, because the pieces of paper the business, which involves thousands of transactions daily, is based on, are not available. They may well be gone for good. And someone at some point (as in a thousand times a day) will want to hold his piece of paper in his own hands. So the paper will need to be replaced. But what does that cost? More from FT:

DTCC is used by the financial industry for clearing and settling trades, and it houses stock certificates so that they do not usually have to be posted around the country from investor to investor. The vast majority of trades are now recorded electronically without certificates moving at all.

The organization said that it switched its systems to back-up servers and was dealing with electronic trades as normal out of offices in Dallas, Texas, Tampa, Florida and Brooklyn, New York. More than 1,000 of its New York employees are working from home.

In recent years, the DTCC has spearheaded an effort to encourage electronic-only share and bond issuance, so the proportion of securities that exist in paper form has declined. The organization has further encouraged the process by encouraging “dematerialization”, where certificates are converted to electronic format.

In a white paper earlier this year, it said that it cost the financial industry almost $300 million to replace $16 billion of certificates that disappeared in the collapse of the World Trade Center in 2001.

An interesting development: the idea is to have people and companies treat the securities trade the way they treat cash vs plastic. That may well work, and even then only to a degree, for shares and bonds worth $100 or so, but we were looking at pieces of paper, remember, that are worth that $10 million on average. It's a nice idea, but the DTCC will in the near future have to keep dealing with a lot of paper. So what has been damaged in that vault will need to be replaced.

How much paper are we talking about, and what does it cost to replace it?

If we put our confidence in the FT for the moment, here are the relevant indicators: the flooded vault held 1.3 million paper certificates. If they represent an equal part of the $36.5 trillion that the total 3.6 million certificates the DTCC says it holds are valued at, $13.2 trillion in certificates may have become effectively useless and in need of replacement.

In 2001, it cost $300 million to replace $16 billion of certificates. Now, it could be easier and cheaper to replace larger amounts of documents, but it could also be much harder, and more expensive. Hard to say from where I'm sitting. It must be hell to look through a far larger pile of soaked and perhaps rotting documents. Labor cost alone could be huge therefore.

In other words, and of course with a caveat or two, the cost – for the financial industry – of replacing the flooded certificates would seem to amount to about $248 billion. Give or take a handful of change. And who knows what else was in that vault.

We should have no illusions at all that we can get to the heart of things in a field as opaque as this (and that is a problem in itself), but I do think it's good to ask questions about it. For one thing, I'd like to know who's going to pay that $248 billion. Because I don't think the banks who own the DTCC are planning to do it themselves. And foolproof insurance for a vault that's not waterproof sounds unlikely as well. I guess we can all figure where it goes from there.

Home › Forums › Did Hurricane Sandy Cause $36.5 Trillion In Damage?