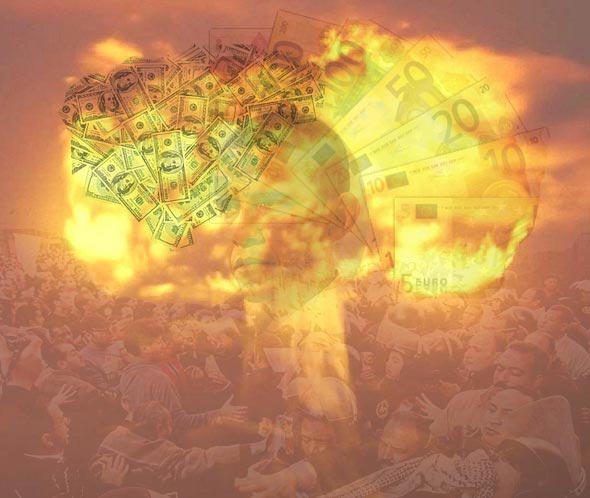 If it hadn't been in the pocket yet, Sandy cast Obama’s victory in stone (unless he really screws up Staten Island, perhaps, or Diebold goes nuts). Not that he really needed it anymore, the economic numbers are simply not bad enough. Or perhaps we should say the public perception of the numbers isn't bad enough. Not for America to go against a long running historical trend that says incumbents with relatively good numbers get re-elected, no matter how much further the country been plunging down the absurd theater scale from bi-partisan to bi-polar in the past 4 years. Or 8, 12, 20, take your pick.

All those close neck and neck polls you read and hear about only seem to serve the purpose of the political establishment and the media, both of which stand to profit greatly in credibility and in monetary terms. They create the illusion that the system functions, and get people to spend billions in ads. The last thing anybody wants you to think is that it's decided way before election day.

Until recently it looked as if perhaps Friday's BLS Employment Report could make a difference for the election, but it won't. Too late in the game. A Greek or Spanish default, followed by an impending dissolution of the EU could have done it, but the union will stay together till Tuesday, though perhaps only narrowly.

It’s a bit of a surprise that Obama never pointed to what's happening in Europe to make himself look good. Because it does. Maybe it's because his campaign team feel that not enough Americans could find Europe on a map even at gunpoint.

A major issue in the US election campaign has been Obama's salvation of the auto industry. And Romney resisting the policies that prevented the industry from collapsing. At the time, at least; he's mostly trying to deny it today. And draws the ire of the industry itself by suggesting Obama killed 15,000 or so Detroit jobs to ship them to China. Not only will this get Obama a lot of votes in the US, it also makes him look "all the more better" when we look at what is going on with Europe's carmakers. GM, Ford and Chrysler are doing very well, thank you, compared to Europe's auto industry. And what problems they do have -mind you, at the moment – largely come from their European affiliates.

In a few choice words: Europe's car industry is a godawful mess. Many European countries have their own car industries, and they are often associated with all kinds of separate patriotic ideals. That has led to a huge slowdown in restructuring measures, though there was a huge overcapacity in production even in the good years. As sales have fallen 10-20-30% just in the past year (Holland came in at -38% yesterday), depending on what country you look at, panic mode sets in.

The last thing French President Hollande needs is for his "own" carmakers to close down factories and throw thousands of workers out on the street. But even Hollande can't stop the plunge in sales, and continued overproduction will only serve the exacerbate the situation. So the president sees himself forced to eat his words and the foot in his mouth, and throw out a paradox: the French government provides Peugeot Citroen with a $7 billion bank guarantee (subject to EU approval), while at the same time the company announces the closure of a factory near Paris that will cost thousands of French workers their jobs.

Hollande is scared to death of the proverbial French protests, but he also knows this is just the start. Rock and a hard place indeed. The reality is that more than half of Peugeot Citroen's sales market is/was in southern Europe, and the firm's shares are down more than 60% since the beginning of the year.

And then on top of that S&P downgraded the major French banks; poor monsieur President doesn't know where to look first anymore. He's thinking about if only his predecessor Sarkozy had taken the necessary measures when he could. But for Sarkozy, like for Hollande now, there was far too much political and patriotic capital at stake, and he was fighting to get re-elected at the time. Though he can't be too unhappy that the downfall he refused to face now comes in Hollande's watch.

2013 will be, for Hollande, the year of protests. He'll need to keep the people satisfied on the one hand and, as if that's not hard enough, on the other hand and at the same time keep the international debt markets at bay. The markets will tend to punish him for every inch he gives the workers and vice versa. Tell me again, why would anyone want a job like that? A job he only got in the first place because he promised the people none of that ugly stuff would happen in the first place ….

The other main French carmaker, Renault, is doing a "bit less bad" than Peugeot, primarily because it has larger stakes in international markets. But with Renault's profit per vehicle but a fraction of what for instance Audi, BMW and Daimler make per unit, something perhaps in the order of 10%, it's not hard to see where this leads. And Daimler too, even with its much better margins, has announced profit warnings.

Europe stands to lose tens of thousands of car industry jobs in the near future. The US does not. Perhaps at a later stage it will, but for now Obama has saved a lot of people from getting pink slips.

Beyond the car industry, European leaders don't look so hot either. British PM David Cameron is set for a fight with his own party over the UK contributions to the EU budget. He wants to freeze it, they want a substantial cut. The EU itself wants more money from its members. German Chancellor Angela Merkel faces a similar battle at home.

Greek PM Antonio Samaras has a very hard time getting the latest troika "reforms" accepted by his party and governing coalition, and serious questions are being asked about the constitutionality of for instance the pension cuts involved. The Lagarde List may hasten his downfall. Protests in Portugal are becoming increasingly desperate and violent, and pose a growing threat to PM Pedro Passos Coelho's grip on power. Spanish PM Mariano Rajoy will need to come up with more austerity, and them some more, over the next year, and at some point he will be booted out. Mario Monti's days in Italy are numbered. Holland's new and old PM Mark Rutte fights his own party over proposed steep rises in healthcare premiums. Wherever you look in Europe, deepening trouble lies ahead. This week's PMI numbers are once again terrible.

In almost every nook and cranny and at every step of the way, in Europe, political chaos looms just around the corner. And the troika just keeps on pushing its demands down people's throats. By this time next year, at the very least not many present leaders will still be in the saddle. If they don't go voluntarily, they will be forced out.

Watching Obama's leadership, or the way it was displayed if you will, in the ongoing aftermath of Sandy, the strength of which was underlined by Governor Christie and Mayor Bloomberg's reactions, I got to wonder which European leader would be capable of a similar feat if called upon. Couldn't come up with one, really. Merkel, perhaps. But only perhaps. The rest would be woefully out of their league.

Imagine Obama, in a pre-1776 setting but in the present US political climate, calling for closer ties among separate red and blue states, like a banking union, fiscal union etc., that would take away far-reaching powers from the separate states and hand them to Washington and Wall Street. That – absurd – image probably better explains the impossibility of what the IMF and EU leaders and incumbent politicians seek to accomplish today than any other can. Just as it best explains the proclivity for broad unrest, blood and war on the old continent.

When you compare the US and the EU at this point in time (and this point only), it's all too obvious who's doing better. Europe makes Obama look good. But that's not the whole story. Europe will also break Obama's career in his second term. It's not just in President Hollande's case that you may need to wonder why anyone would want that job.

All the plans to save Greece, Spain et al and keep them in the eurozone are still based on growth recovery prospects which are in turn based on entirely unrealistic assumptions. And every single turn of the way those assumptions have to be recalibrated downwards. Which always leads to more austerity demands, more cuts. And at some point that will no longer work. You can't cut beyond the bone. And obviously you can't grow an economy with 25% unemployment or with over 50% of your young people out of work.

The eurozone is about to fall to pieces. That will shake the global financial world to its core, including the US. There are estimates for countries that leave the currency union to see their GDP fall as much 40-50% in the first year. It's today all but certain that Greece needs a debt restructuring in which the EU and ECB will be forced to write off substantial parts of their holdings. For the incumbent politicians in the richer core countries that's about the last thing they want to explain back home. If only because they know full well that there's much more of that in the offing.

Europe should focus on a painless as can be transition to a situation in which the hardest hit countries can leave the eurozone and still remain friends. But it's still double or nothing all the way for the leadership, an increasingly dangerous kind of blindness. The longer they delay accepting this, the more devastating the explosion will become. And not just in Europe. It will expose the facade, the mirage that the world economy has become, where keeping up appearances has become possible only through mobster accounting standards and grand theft auto from coming generations.

When the eurozone explodes, so will the rest of the world economy. Including the US. Obama doesn't have to worry about NOT getting a second term; he should instead worry about getting it, and about what's going to happen on his watch in the next four years. If he lasts in office that long.