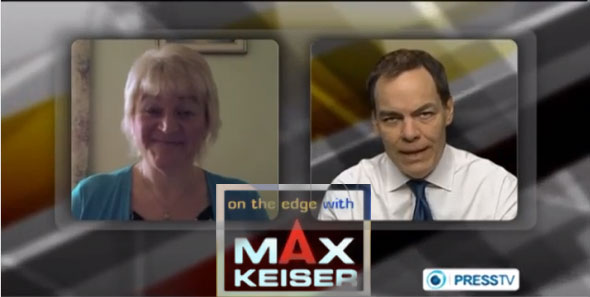 The Automatic Earth's Senior Editor Nicole Foss talks to Max Keiser again, this time on PressTV's On The Edge with Max Keiser.

Nicole and Max discuss Europe's shrinking pie, Canada's bursting bubble, the ongoing global debt deflation, the eternal tug of war between greed and fear, the greater fool, and the similarities the demise of the banking system in 14th century Venice has with Washington DC today.

Interestingly, Max ticks off a whole list of points that came up in his previous conversations with Nicole over the past few years, and where she has now been proven right. A convergence of opinions looks to be taking shape.

The world at large may not yet be ready to embrace the entire picture we have been painting at The Automatic Earth, and that would perhaps be too much to expect given that our picture is substantially different from the one offered by the vast majority of "opinion makers", but step by step we do seem to be getting through.

"What we're seeing is that the pie is shrinking; there's not enough to go around. When the pie shrinks, when you have economic contraction, you also have a contraction of the trust horizon. What that means is that national and international institutions become stranded assets from a trust perspective. They lose political legitimacy; this leads to a great deal of social polarization. [..] People are more tightly defining what constitutes "us", and defining "them" as some kind of threat."

"Money is flooding into places that have huge problems, but their problems are less immediate than the European periphery. We're going to start to see enormous divisions between different degrees of risk: within the European Union it'll be the periphery vs the center, but for some people that’s not enough risk avoidance, it has to be inside the eurozone vs outside the eurozone entirely. I think we're going to see all those risk divisions, maybe long term vs short term as well, all these risk divisions are going to blow out in terms of spreads over the next while.

And we're really going to see attempts at very large movements of capital, flight to safety, but the governments will try and prevent that with capital flight controls of all kinds, as they're already doing in parts of the periphery. It won't work, it will only feed the cycle of fear, the stability mechanism is not enough.

They can't get ahead of the curve; everything they're doing is too little too late, and when fear is in control then you have a downward spiral and it won't stop until deleveraging has run its course. Until the small amount of remaining debt is acceptably collateralized to the few remaining creditors, and we're absolutely nowhere near that point at the moment, we're far closer to a top than a bottom."

Update: I know this ain't the 4th of July, but here's still wishing anyway that all them Jersey girls will be safe and sound tonight and beyond; this one goes out to you.

Sandy, the angels have lost their desire for us
I spoke to 'em just last night and they said they won't
set themselves on fire for us anymore