I'm not a big fan of venting opinions on the topic "capitalism", since I think it's a very poorly defined term, i.e. many people have many different ideas about what it really means. But the report below certainly deserves attention, in my view, if only as a driver of discussion. Do read the whole report, I'd suggest (click on the article title).

This is a revised transcript of a presentation by Jonathan Nitzan at the 2nd Annual Conference of the Forum on Capital as Power, The Capitalist Mode of Power: Past, Present, Future, October 20-21, 2011, York University, Toronto.

The Asymptotes of Power
by Shimshon Bichler and Jonathan Nitzan

Today’s talk has, like the one I gave last year, presented my joint work with Bichler on the present crisis. Last year, I argued that this crisis is a systemic one, and that capitalists were struck by systemic fear ?– a primordial consternation for the very existence of their system. My purpose today has been to explain why.

In order to do so, I have set aside the liberal-democratic façade that economists label ‘the economy’ and instead concentrated on the nested hierarchies of organized power. The nominal quantity of capital, I’ve argued, represents not material consumption and production, but commodified power. In modern capitalism, the quantities of capitalist power are expressed distributionally, as differential ratios of nominal dollar magnitudes. And the key to understanding capital as power is to decipher the connection between the qualitative processes of power on the one hand, and the nominal distributional quantities that these processes engender on the other.

I have dissected, step by step, the national income accounts of the United States, from the most general categories down to the net profits of the country’s largest corporations. I have shown that, from the viewpoint of the leading corporations, most of the redistributional processes – from the aggregate to the disaggregate – are close to being exhausted. By the end of the twentieth century, the largest U.S. corporations, approximated by the Top 0.01%, have reached an unprecedented situation: their net profit share of national income hovers around record highs, and it seems that this share cannot be increased much further under the current political-economic regime.

This asymptotic situation, Bichler and I believe, explains why leading capitalists have been struck by systemic fear. Peering into the future, they realize that the only way to further increase their distributional power is to apply an even greater dose of violence. Yet, given the high level of force already being exerted, and given that the exertion of even greater force may bring about heightened resistance, capitalists are increasingly fearful of the backlash they are about to unleash. The closer they get to the asymptote, the bleaker the future they see.

It is of course true that no one knows exactly where the asymptote lies, at least not before it is reached. But the fact that, over the past decade, capitalists have been pricing down their assets while their profit share of income hovers around record highs suggests that, in their minds, the asymptote is nigh.

How much more force and violence are needed to keep the current capitalist regime going? This of course is a subject in and of itself. But given its crucial importance, I think it is worth at least a brief, closing illustration. 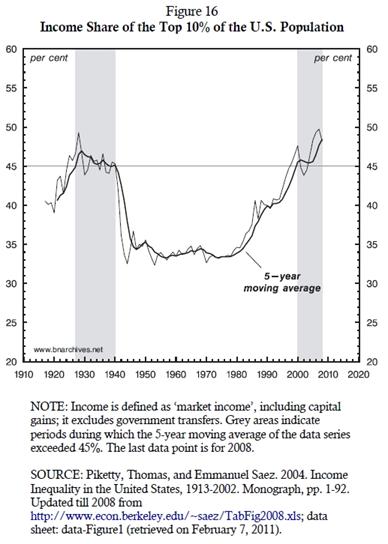 During the 1930s and 1940s, this level proved to be the asymptote of capitalist power: it triggered a systemic crisis, the complete creordering of the U.S. political economy, and a sharp decline in capitalist power, as indicated by the large drop in inequality. The present situation is remarkably similar – and, in our view, so are the challenges to the ruling class.

In order to have reached the peak level of power it currently enjoys, the ruling class has had to inflict growing threats, sabotage and pain on the underlying population. One key manifestation of this infliction is illustrated in our last chart, Figure 17. 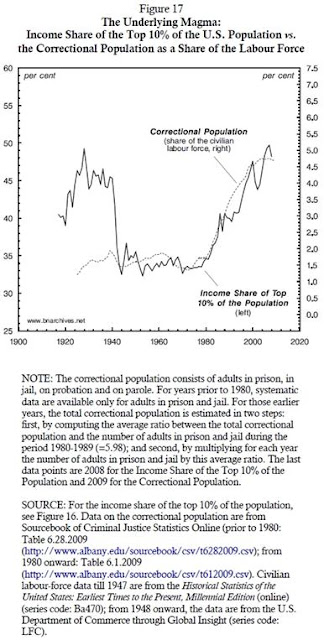 As we can see, since the 1940s this ratio has been tightly and positively correlated with the distributional power of the ruling class: the greater the power indicated by the income share of the top 10 per cent of the population, the larger the dose of violence proxied by the correctional population. Presently, the number of ‘corrected’ adults is equivalent to nearly 5 per cent of the U.S. labour force. This is the largest proportion in the world, as well as in the history of the United States.

Although there are no hard and fast rules here, it is doubtful that this massive punishment can be increased much further without highly destabilizing consequences. With the underlying magma visibly shifting, the shadow of the asymptote cannot be clearer.

Home › Forums › The Asymptotes of Power