This is the third in an ongoing series documenting the principles and practice of eco-thrifty renovation by Estwing of the ETR Blog, being published every Saturday in the Wanganui Chronicle.

Last week I wrapped up my column with words of wisdom that did not quite make the list of trending terms on Twitter. For those of you who missed the re-Tweets, those words were, “A window is simply a hole in the side of your home with a piece of glass (two if you’re lucky) in it. Windows can gain heat energy or lose it. Because winter is the time of year that we’re mostly concerned about this, I’ll put it as straightforward as possible. In winter, northerly facing windows are net energy gainers and southerly facing windows are net energy losers. Summer is a different story, and there is such a thing as too much incoming solar heating even in winter, just ask the hippies from the 1970’s who had good intentions but incomplete design ideas.”

Did anyone ask an aging hippy? If so, they probably said those early passive solar structures were too damn hot on sunny winter days and that they had to open the windows to keep it comfortable. That’s because they probably had heaps of sun-facing glazing but not enough thermal mass. Thermal what? This is probably the least understood aspect of passive solar design, which it probably why it was overlooked by many early solar builders (who may or may not have also been under the influence of Jimi Hendrix.)

Just as solar gain is easy to understand by thinking about a car parked in the sun, thermal mass can be experienced by placing one’s hand (or bum) on a sun-baked stone or concrete stoop or curb 30 minutes after sundown. Massive things (ie, they contain lots of mass) gain heat slowly and lose it slowly. Wanganui owes its moderate climate in large part to the thermal mass of the Tasman Sea. Water and anything that sinks in water can be classified as ‘massive’ while anything that floats in water is more ‘insulative’. (Insulation will be discussed next week.) Just as the Tasman moderates Wanganui’s climate, certain massive elements inside of the building envelope can moderate a structure’s climate. In new dwellings this usually takes the form of an insulated concrete slab. But our 100 year-old villa is on piles. How did we add mass without buckling our aging rimu floor joists? (Truth be told, I did sister up some of the joists before we took the measures described below, but that was purely precautionary. I am VERY conservative.)

We added thermal mass in three ways, and did so only on the north side of our home and only in places where the low-angle sun strikes it directly during winter months. For the most part, our thermal mass is invisible. In other words, if you walked through our home it would not be immediately apparent. For example, on those walls that receive direct sunlight in winter we added an extra layer of plasterboard (aka Gib). The mass of plasterboard can be ascertained by selecting a sheet measuring 1.2 X 2.4 metres and lifting it over one’s head. Another ‘invisible’ way we added mass was to install an antique, cast iron, claw-foot bathtub in our sun-drenched bathroom. (Ascertain mass as described above.) 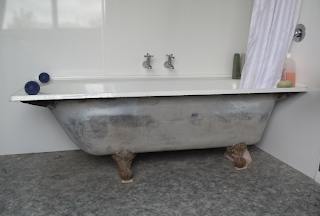 And finally, we added mass inside of our building envelope by the careful locating of our code-approved antique Shacklock 501 coal range (300 kg), with brick surround (300 kg) and steel-reinforced, fully inspected concrete hearth (100 kg). This 700 kg behemoth receives direct sunlight in winter from three different windows at three different times of day. 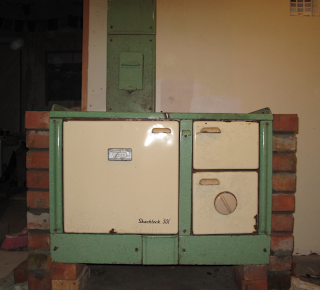 This 700 kilogram beast stores sunlight energy on clear days and can be fired up with wood on cloudy days.

This heat energy is stored in the mass, which prevents our home from overheating, and then releases it slowly at night as our home cools (despite our best efforts to hold in the heat with insulation: the topic of next week’s column).

PS – I learned yesterday that a house behind us was purchased by some Australian speculators for $75,000 four months ago. They’ve spent $50,000 renovating and it was just appraised for $90,000. And it is still uninsulated. Glad we went the eco-thrifty route.