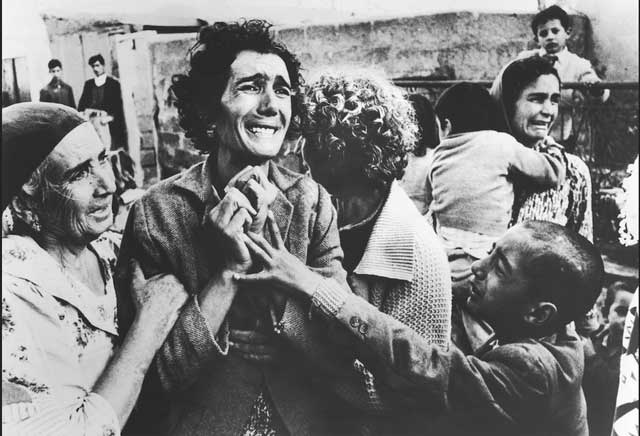 In all of the things written about Greece and the rest of southern Europe these days, and there's an avalanche of articles, there is very little mention of the fact that Greece, Spain and Portugal were – brutal and bloody – dictatorships until less than 40 years ago. After WWII, their populations were largely left to fend for themselves for decades by the richer countries of Europe – and by the US -, until they toppled their military regimes in the mid-1970s.

While the rest of Europe, as well as the US, enjoyed their probably richest time in history, Greek, Spanish and Portuguese citizens lived mostly in wretched poverty and deadly fear. Italy might as well have been a dictatorship too, it was a democracy only in name, with the iron grip on power of the mafia, the Vatican and a slew of secret societies. Ireland was pretty much a desolate backwater.

When Greece finally dumped its military regime in 1974, moreover, it went straight to the Papandreou and Karamanlis families and their PASOK and New Democracy parties, and corruption and feudalism simply continued underneath a thin veneer of ”voting rights". When the country entered the EU in 1981, that's where it was: a more or less feudal society. But one that Germany, France and Holland figured they could sell their increasing industrial output to. That output had outgrown its established markets, and new ones were created in the former destitute dictatorships in the south. It didn't matter much, other than in name, what the domestic political situation was in these new markets. What mattered was how much production could be sold. If rich Europe felt parties like PASOK would produce better economic results, they would support them.

And after all, there were clear and present dangers in the PIIGS countries. Not only were there the IRA in Ireland, ETA in Spain and the Red Brigades in Italy, they all had, to varying degrees, strong communist movements. Which had typically formed not so much as ideological movements, but as the only force against brutal regimes from which rich Europe – and, again, the US – historically had done precious little to protect the people they now sought as the new customers for their industries.

Communists were considered evil. They are a detriment to establishing new export markets. They had ties to Russia, maybe even China.

It's sort of funny to realize that if the Greeks today elect SYRIZA, it’ll be the first time in a long, long history that they vote to move away from feudalism and dictatorships. And that move is presented to them, and to us, as the worst one possible. It's an old song: history gets turned on its head for the sake of money and profits. That's undoubtedly also why western media label the party "extreme left".

I could write a lot more on the historical issues that play into today's Greek vote, on Greece's role in WWII, which lasted way beyond 1945, with a bitter civil war and a 1967 US-supported coup, about its part in the entire deadly Balkan conundrum, the neverending fights over territory, which saw their most recent episodes in mass killings in Bosnia and Serbia, about the Ottoman and Habsburg empires, on why the countries resurrected by the Marshall plan left southern Europe to its own suffering, but for now let's focus on the present.

The EU core countries plan a huge firewall to protect Spain and Italy from losing access to bond markets in case Greece leaves the eurozone. But surely they must understand that trying to dump Greece would require that firewall to be much larger?! They might be much better off negotiating a new deal with Greece. From a strictly financial point of view, that is.

And a new deal is necessary anyway, because the Greek economy is fast deteriorating, and the country can't possibly fulfill all conditions the "old” deal demands, no matter how austere it gets. Moreover, banks deposits have plummeted through capital flight and domestic withdrawals, so all banks are -again – teetering. Spain's banks are little different.

If the ECB, the EU, and the Bundesbank would accept similar haircuts to those they themselves have forced upon private lenders, Greece would be much better off. But then, such haircuts would be demanded for Ireland, Portugal, Spain and Italy too, and that would empty ECB reserves, and then some. Hence, Greece is forced to pay back loans for which it was clear when they were given that they could never be repaid.

In the end it's really simple: the eurozone is doomed to failure, simply because the debt levels are too high. All over the place; not just in Greece, which is no more than a sideshow.

When, in the first large European recent crisis event, Ireland's banks failed 3 years and change ago, its government could – make that should – have allowed loans to its banks to default. Many of these loans were from German – and French, Dutch – banks. Instead, they were made whole, and Germany didn't have to bail its banks out. Ever since, this has been the one and only policy, with the possible exception of the Greek haircut. But it doesn't solve anything at all: debts are still way too high. They're just transferred, every step of the way, from the banks' bond- and shareholders to the public in all of Europe's streets.

If a bank has excessive debt levels, it needs to be restructured and allowed or made to default, and its creditors should incur haircuts in order of superiority. The big problems today, in Europe and globally, are that just about every bank has hugely excessive debt levels – and exposure -. This means that in case of restructuring an enormous amount of – virtual – wealth would vanish overnight. Wealth that is in the hands of those who dictate policy, and have the political power to shift their debt to state coffers.

It is a dead end policy, but that doesn't matter much to them: they just need a bit more time, so they can get as close as possible to the completion of the transfer. Then, everything can and will be allowed to fail.

In that light, perhaps a SYRIZA victory today would be the best thing that can happen, for the Greeks, but also for all other Europeans. In spite of the plans to build a €1 trillion or bigger firewall around the rest of the PIIGS, it might just force the hand of the bankers/politicians, if only because €1 trillion won't be enough to appease the markets for long, and neither would €2 trillion. €100 billion for Spain was effective for no more than a few hours.

If you just keep on throwing money at the banks, without restructuring their debt, everybody knows that they're still weak and vulnerable, and that means betting against them is potentially profitable. As I wrote earlier this week, what you get is a situation where banks which are walking dead, take the money from the bailout facilities established by national central banks as well as ECB and EU, and use that money to bet against the whole set-up, and against their peers. It's simply the potentially most profitable game in town. They know how vulnerable other banks must be because they know their own situation.

Maybe Alexis Tsipras, if he wins, can simply threaten to print euros if the ECB closes the spigot, or even to print them with an X, the symbol for German euros. Sure, perhaps that's illegal, but then, tons of legal issues are either not at all, or poorly defined, so who knows, or cares, really? One thing Tsipras will certainly do is to say (he already has) that Greece doesn't want to leave the euro, and since there is no mechanism for a country to leave, the rest will need to invent a mechanism, and it will in all likelihood need to be accepted unanimously, so bring it on!

Look, Tsipras knows the history I talked about; he knows his potential place in history, and he knows where Germany et al are vulnerable. Most of all, he knows he can't lose: if someone else wins this round, and the austerity plans are Greece's immediate future, he’ll have another shot at gold a few months from now, because there is no way it's going to work.

Because Greece is too far gone, and so are Spain and Italy, and increasingly, France is mentioned as an at-risk economy, and and and. One more time: there's too much debt, and unless it is restructured, and the banks take losses, not the public, nothing truly changes.

Greece has one thing going for it: because dictatorialism, and the abject poverty it brought along, ended so recently, people largely still know how to take care of themselves. The same goes for Spain, Italy and Portugal. Not in Milan or Barcelona, but certainly in the countryside. You won't find that in Britain or Holland or most of Germany and France. It may be the biggest blessing they could hope for. And they might be much better off entering the inevitable next phase with Tsipras than with another Papandreou or Karamanlis, or heaven forbid another military regime. They haven't exactly had a fair and square deal for the past hundred years or so.

Home › Forums › What Choice is in Greece’s Best Interest?