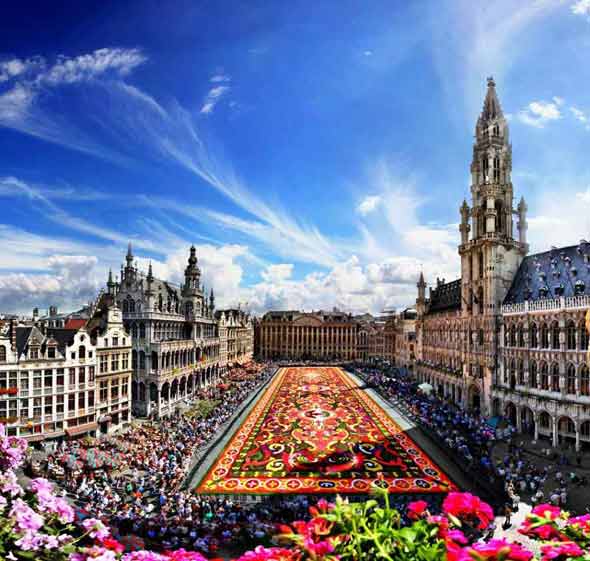 Alright, OK, so we have new sorts of relative highs in European and US stock markets, even as we keep a w(e)ary eye on Shanghai's new lows. The western highs seem to have a lot to do with all kinds of expectations of ECB sovereign bond purchases and/or cooling German resistance against them.

All this is accompanied by a rising Euro, and that little detail is far more puzzling than is generally acknowledged. Because there is only one reason for the ECB, with perhaps Angela Merkel and the Bundesbank chiming in, to even consider such measures as more – PIIGS – bond buying, that are tremendously unpopular among a broad swath of Europeans. That reason is that the PIIGS countries, and Greece, Spain and Italy in particular, are doing much worse than anyone wishes to admit in public.

Thus, we have a substantial part of the Eurozone sinking deeper fast than anyone will tell you, while at the same time the currency they use is rising. A rise based on expectations of other Eurozone nations, notably Germany, basically putting up the health of their own economies as collateral to inspire confidence in ECB sovereign bond purchases. Now, you can play this game for a while, no reason to doubt that. But I would personally think we've finished playing out that particular "while" a long time ago and running. Whatever remains now is but a wager. As in: the entire Eurozone has turned into a casino.

If we, and they, the ECB, Germany, Holland, Finland on the one hand, and Monti, Rajoy and Samaras on the other, want to play these moves AND have a shred of credibility left once they're done (and I know what you're saying: will they ever be done?), we and they will need in the end to be able to answer this one simple question. Which they will never ask, we will have to do that for them. That question is: Where's The Debt? Or maybe more accurately: What Happened To The Debt?.

If a party, be they an individual, a company or a sovereign nation, carries so much debt that it is vulnerable to attacks by the likes of bond markets (or bailiffs in the case of individuals), a handout or bailout will never suffice to abolish the threat for very long, unless it is provided on the condition that the debt that led to the threat in the first place is restructured. That is to say, creditors take a haircut on what is owed to them.

Handing over money to these creditors without that haircut doesn't even begin to solve the issue. It just – hopefully – keeps them quiet for a little while, but then they'll be back, because they're still owed money. Yeah, think Tony Soprano.

In the case of Europe, the EU's national governments, Germany's first of all, refuse to tackle the debt issue, when it comes to Italy and Spain, because it would threaten their own respective banks. And probably their pension funds too. The highly needed haircuts that would come with the highly needed debt restructuring, would threaten to expose the very real very dire situation that these banks are in. And that in turn would risk setting off a domino avalanche that would risk bringing down international – including American – banks as well.

And so the one question that makes any true sense to ask, is never asked.

In the case of Spain, it has become abundantly clear lately that there is no clear distinction to be made between bank debt and sovereign debt. Hence, an ECB bond buying program would be beneficial to Spanish banks too. If only because they own so much of the stuff, something they were coaxed into doing by the ECB schemes that allowed, nay pressed, them to borrow on the cheap to buy their own sovereign debt. Rajoy even suggested using the remainder of the €100 billion bank bailout for sovereign debt. Which is quite plainly illegal, but who's counting?

If you would add Spanish sovereign debt to Spanish bank debt, you would come up with a number that nobody in the whole wide world wishes to address (and so they don't).

Which is why we see Mario Draghi et al "invent" clever schemes to buy Spanish bonds even though that's not the ECB's mandate at all.

The latest line is that they do it to "stabilize the currency". Which is fine in itself, or so I guess, only we would like to know how long they would plan to stabilize it for (two weeks doesn't seem to cut it). And that issue is not addressed. Ever.

Hence, we are left to conclude that there is no effort to deal with the debt, there's not even an attempt to do it. Mario Draghi is merely trying to lift a corner of the magic flying finance carpet, so Spain can be allowed to sweep its true debt burden under it, out of our sight.

And a carpet can hide quite a bit of dead dust for quite some time, as you know if you've ever tried the approach. The thing about debt, though, is that it's not dead dust.

Debt lives. It's alive. It's almost organic. Debt festers and ferments under that carpet, it requires interest and principal payments, and it grows if these payments are not made.

Well, if you look at the real numbers, Spain can't even meet the interest payments anymore. And whether that's 6% or 7%+ is immaterial really. That's why it's in such a mess that Draghi feels he needs to come up with these rule and law bending and stretching schemes to begin with. If Spain had any chance at all of getting out from under its debt load on its own anytime soon, we wouldn't be talking about these ECB measures today at all.

But we are talking about them. And they lift financial markets. And as the Eurozone deteriorates, the euro – ironically – goes up.

Why? ¿Por qué? Because the markets think Germany et al will agree to join Mario Draghi's mind games and pay up to lower Spain's debt. As simple as that.

But Draghi has no solution for the Spanish debt, be it sovereign or bank debt. He just has that carpet to sweep the debt under.

Well, he perhaps has other options, like debt restructurings, defaults etc., but he's not addressing those. Mario is a servant of the banking industry. Just like any other central banker and government official in the western world.

There's no-one in sight who tries to balance the reality of the sovereign and financial sector debt with the ability of the people, the taxpayers, to pay for it. Which is why the Euro can be a hot item even as the countries that presently use it as their currency go down in flames. And their people go down with it.

Yes, there's money to be made in the markets. That's obvious when you look the numbers. But what would have to be at least as obvious is that none of it is based on anything fundamental.

This rally will implode upon itself.

Some of the big boys will have left in time, and made a killing. From the point of view of the people on the ground and in the street, however, it's not going to look all that great. They're mere pawns in a game that seeks to maximize profits off their backs.

And that will continue whatever Mario Draghi or Angela Merkel present in the way of grand plans. They may all look great, and the markets may react with yet another high of one kind or the other, but down the line there's still that one and only question that needs to be answered:

What Happened To The Debt?

Any plan that doesn't address that question directly is worth less than the digital paper it's written on. Any such plan won't solve a thing.

And that magic carpet that the likes of Mario Draghi are trying to sweep reality under? You know what? It's gruesomely expensive, but that's not all, the cost is not even the most important part. Here's what is: that carpet was bought on credit. And the collateral for that credit is the future of Europe's younger, even its unborn, generations. That's right, the generations that presently face 50% or so unemployment numbers.

Enjoy your rally. But do realize that you're trying to outsmart reality. It's hiding under a carpet, but it's no less real.

Image top: In a tradition that began in 1971, the main square of Brussels is covered in over 700,000 begonias flowers. From all-that-is-interesting.com

Home › Forums › What Happened To The Debt?