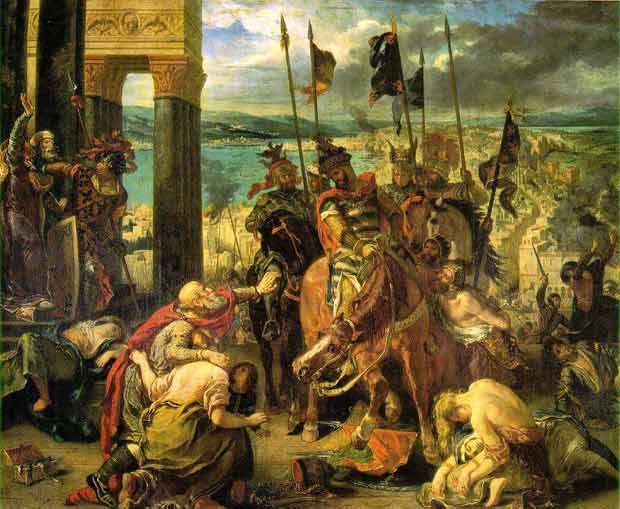 Over the past week, Europe, or rather the present EU leadership, has done damage to itself it will never be able to repair.

It seems to escape everbody, but that doesn't make it any less true: people from Portugal to Spain to Italy to Greece to Cyprus and Ireland are worse off today than they were when they first adopted the euro. Moreover, their economies are all getting worse as we speak and projected to plunge further. The once highly touted blessings of the common currency are by now lost on most of southern Europe; for them, the euro has been a shortcut to disaster.

Until Cyprus, the EU had always maintained two prime objectives (and spent €5 trillion over 5 years to prove it): keeping all members in the eurozone, and guaranteeing all bank deposits under €100,000. These objectives exist from now on only in words. Brussels has threatened to both grab deposits of small savers and throw Cyprus out of the monetary union. Two watershed moments in one.

The membership of the European Union, the subsequent introduction of the euro and the seemingly endless flow of credit that came with these "privileges" provided the region with a temporary illusion of increasing wealth and new-found prosperity. Today it knows that none of it was real, or earned; it was all borrowed. It's time to pay up but there's no money left. It needs to be borrowed. From the European core and its banking system.

The EU's financial scorched earth strategies have left its Mediterranean members with highly elevated unemployment rates, fast rising taxation levels, huge cuts to pensions, benefits and services and above all insanely high debt levels, personal, corporate and sovereign. And now, as ironic as it is cynical, their savings. The only thing that keeps the nations from going bankrupt is more debt, largely in the form of ECB loans.

What sets Cyprus apart from the other victims of Brussels' expansion hunger is the timing. The country (actually only the Greek-Cypriot 59% of the island of Cyprus) was only allowed entry in the EU in 2004, and it didn't introduce the euro until 2008. At that point, total bank assets were already well over €80 billion, or a very unhealthy 450% of GDP, and kept on rising with a vengeance. Four years later, in early 2012, the EU/ECB/IMF troika forced €4.5 billion in losses on the Cyprus banking system through the haircut on Greek sovereign debt. Now, one year after that, the same troika forces Cyprus to cough up €5.8 billion. No great math skills required: Cyprus was essentially pushed under the bus in order to – temporarily – save Greece.

The EU, with all its 1000s of highly paid employees and its multiheaded leadership structure, time and again fails to do its overseeing job, and then conceals this by turning around and bullying the victims of its failures. Of course they knew what state Cyprus was in when it switched to the euro, and the country should never have been allowed to enter. And of course the EU and ECB leadership knew all along what happened in Cyprus between 2008 and now, or at least should have. It's their job to know. Hence, the leaders should be fired either for not knowing or for knowing and not acting. They just cost taxpayers yet another grab bag full of billions, and they should be held accountable for that.

The problem is they're not accountable to anyone for anything they do, other than in name. Or put it this way: people like Van Rompuy, Barroso and Olli Rehn are not accountable to anyone but themselves, each other and Angela Merkel's entourage. There's a great word in the English language to describe their attitude; the ancient Greek "hubris". Add a side dish of arrogance and incompetence and you have a lethal combination.

By the way, here's how European democracy works: when the whip comes down, everybody will do what Berlin wants. Germany has some 24% of the EU population, and Angela Merkel's ruling party (through a coalition) has maybe a third of all votes. That means perhaps 20 million Germans, or at best 6% of the 332 million people in the Eurozone, decide what goes and what does not.

Hubris makes stupid (or, granted, it could be the other way around). That's why we saw the following over the past week:

1) The announcement of the initial Cyprus plan, the one that included a 6.75% tax for all deposits below €100,000. It doesn't matter that it's no longer in the final plan, the "deposit grab" genie has left the bottle and will never return. It's like breaking an egg; restoring confidence is no longer an option. No European small saver will feel safe again for decades, and many will take much of their deposits out of their banks, which will push banks over the edge, requiring more bailouts, rinse and repeat.

The troika, joined by German finance minister Schäuble, went out of their way to put all the blame for this on the Cyprus government (the ball was in their park), but given the obvious potential consequences (the devastating loss of trust), they should never have allowed either the responsibility or the blame to be there; it was theirs to take. That they didn't, leads to point 2:

2) Brussels and Frankfurt can neither oversee nor control the consequences of their actions. The trust issue is just one of many topics that have made this clear. And as long as the present leadership structure remains in place, what happened in Cyprus will keep on happening, because:

3) They don't care. They don't care that the entire southern part of their union is falling over the edge. They don't care what happens to the people in the streets of Nicosia, or Porto, or Sevilla, their jobs, their savings, their well-being, their children. They're not accountable to those people. They're untouchables as far as democracy goes in all but the most cynical definition.

Imagine you're a cleaning lady or a primary school teacher, or you have a small grocery store or a bakery, in a town somewhere in Spain or Italy or Portugal. At home, you've already been hit with huge tax rises and budget cuts. But there's one thing you can count on to stand between you from things getting real bad: the savings in your bank. And then you see on TV what's happening in Cyprus. Where people had the same deposit guarantee you had, until from one day to the next they didn't. What would you do with what's left in your bank account?

People with bank accounts in Cyprus no longer have access to their money. They'll be stuck in a repeat of Argentina's early milennium capital controls for months. People in Spain and Portugal still have a choice. Maybe not for long, because at the first hint of capital flight to the backyard bank, control over your own money will very rapidly become a thing of the past.

The only reason for Europe's Mediterranean nations to remain in the eurozone and the EU will be bullying from Brussels and Berlin. It's this bullying from the core, from those who preach union above all else, which will be the undoing of the entire project, but after a lot more pain of the same kind that now hit the Cypriots will have spread north (the rot won't stop).

Unless first one country and then inevitably others – soon – decide to leave, say thanks for all the fish, and (re-)build their own nation. That would be by far the best choice for all of southern Europe. Staying in the union has nothing positive to offer anyone anymore, except for those presently in power in Brussels and in the capitals of the rich core nations. The dissolution of the union is inevitable. Unfortunately, given the hubris in the core, so is the bloodshed that will pave the way there.

Home › Forums › The Lesson From Cyprus: Europe Is Politically Bankrupt