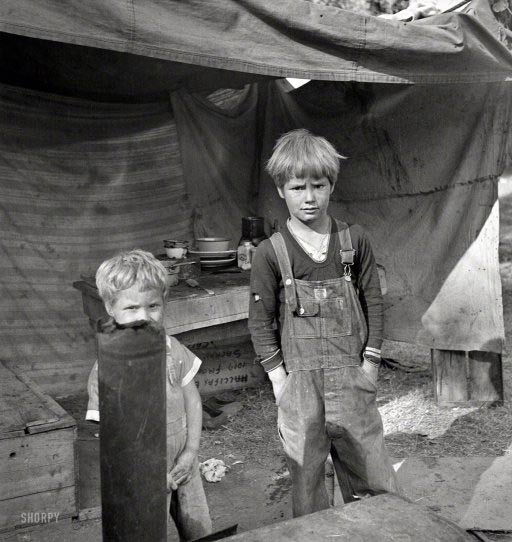 Dorothea Lange When I was a kid 1936
"American River camp near Sacramento, California. Children of destitute family. Five children aged two to seventeen."

Amid all the superficial up and down rumblings of stocks and bonds, and hyped up analysis thereof, none of which makes you any wiser (hey, I told you Abenomics can't work..), it's a good idea to look at some of the more profound workings of the financial system. I saw an interesting take on an angle into this, even though unfortunately it was by itself also superficial.

The angle in question was provided by Walter Hickey for Business Insider, in an article (originally) entitled " Compound Interest Is Responsible For Modern Civilization " (it later turned into "A Simple Math Formula Is Basically Responsible For All Of Modern Civilization", but that’s not even true: just because something can be expressed in a math formula doesn't mean it turns into that formula). It's interesting, and it's not bad, but, sorry Walter, with all respect, I don't think it's good enough.

And it made me wonder what people make of the whole compound interest notion, what they know about it, how they see it, what their intellectual or even emotional reaction is. I'd love to hear that from you. We've all grown up with it, to the extent that we probably don't give it enough thought; we view it as some kind of natural law – which it isn't – .

My own take is that while Hickey presents an interesting summary, the buck doesn't stop where the article does (at only the positive take on it); it reads too much like an Ayn Rand history lesson. In my opinion, you can't really talk, these days, about compound interest merely as "look at all the glorious things it's done for us", no more than you can talk about only the benefits of the oil industry, car manufacturing, GMO crops, nuclear energy or suburbs without providing a balancing part of your story that touches on the negatives as well. We got the brains, might as well use them.

Or you can for instance state that compound interest is responsible to a large extent for the existence of the banking and financial sector, and it's by no means a given that they are a positive segment of our world. We live smack in the middle of a period of time in which you simply can't ignore that. Even simpler, you can say things like: "What happened to the 4-day work week? Compound interest did."

Let's start with a few examples of how Walter Hickey sees the topic, and I'll provide a few short comments:

Well, perhaps modern agriculture, but you can't very well make the point that agriculture itself is a direct consequence of compound interest. The mega farm, sure, and Monsanto, but they're not identical to agriculture.

Today, nearly everything we do financially is tied to the idea of compound interest in one way or another.

That makes me think about the 59.8% of young people in Greece who are unemployed today. How would they read this?

70% of Americans go to college and 60% use loans. The reason capital is available is lenders make money from compound interest.

Yeah, but isn't that then also, , the reason so many students are up to their necks in debt? Or that they perhaps need all the loans because compound interest allowed the lenders to create a situation in which students could only get an education if they applied to said lenders for a loan in the first place? I could go on here, referring to student loans until very recently, how there was never a question of a nation's brightest young people having to dig a very deep hole for themselves just to get an education. I could even talk about what it means to a nation if and when many of its brightest fall off the selection divide not on abilities but on wallet size, but I think I'll instead digress for now.

70% of Americans own a home. How'd you pay for it? Most Americans did it with a mortgage.

Now we must ask, if we want to or not, by how much compound interest has raised home prices – labor, taxes, materials, lenders' fees- or in other words how much cheaper a home would be if not for compound interest. People typically pay 2-3 times the principal on a 30-year mortgage, and it's hard to think of that as a good thing.

Do you have a bank account? It's low-cost or free because the bank is using your money to give out those loans.

I think we can safely discard the idea that the way modern banks operate is through lending out the money you deposit with them.

Also, if Einstein ever called compound interest "the most powerful force in the universe", it’s safe to assume, in view of other comments he made about the world in general, that he meant that as a warning, not a recommendation. The financial world doesn't seem to have quite gotten that, there are people out there who suggest he said "Compound interest is the eighth wonder of the world", "The greatest mathematical discovery of all time", or "Compound interest is more complicated than relativity theory". Maybe they're confused with Johnny Carson, who said "Scientists have developed a powerful new weapon that destroys people but leaves buildings standing — it's called the 17% interest rate."

Here's a short take on what I think is the essence of compound interest:

Compound interest means charging a borrower principal (p) + interest (i). If the borrower in turn also wants a profit, he'll have to charge p+i+i2 (i2 is larger than i). Eventually, you arrive at p+i+i+…n. Which is a simpler version of this math formula Walter Hickey provides: 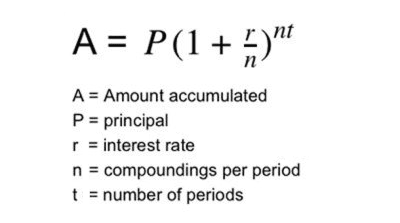 Somewhere along this line, problems arise: one man can only produce so much. The "solution" of course has been the use of external energy sources (wood, slaves, hydro, coal, gas, oil, nukes). They enabled more production "per capita", and therefore the continuation of the p+i+i+…n sequence. What is mostly ignored is that this sequence requires ever more energy to keep the flow going; there is no satisfaction point.

Can we find ever more energy? Doubtful, and even if we could, thermodynamics (2nd law) would still halt the sequence: an increasing amount of energy is needed to clean up the waste produced by the use of energy (no matter how "clean" it is).

That’s how and why we now have compound(ed) crises: financial, energy and environmental. From this point of view, it looks like compound interest inevitably breaks our world. After making it first, perhaps, but still; and there doesn't seem to be a way out. Compound interest doesn't just only "allow" for growth (which sounds quite benign), it demands perpetual growth. And since perpetual growth is not possible, at some point you will see either entire societies or parts of them become poor(er), often in dramatic fashion, because compound interest knows no limits.

Of course we could have parties default on their debt, and that would deflate the compound bubble a little, but at present that doesn't happen: debts are merely transferred from the private to the public sector. So no escape there either.

I'll stop here, because, as I said, I'm interested in hearing what you think about all this. Please share you views in The Automatic Earth comments section.