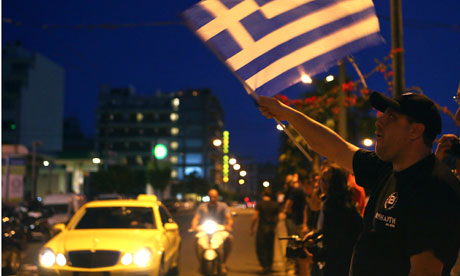 It is now 100% clear to everyone that the European people, and specifically the Greek people, are almost unified in their resistance to further austerity. Last year, we would occasionally hear some ill-informed pundits squack on about how most of the Greeks still like the Euro and wouldn’t really mind making “a few” sacrifices to stay in it, but now those people are forced to shut up, sit back and learn a thing or two. The message of “no more austerity for the people and welfare for the banks” has reached an unquestionable level of pitch perfection.

The fate of Greece, its political economy and its people, though, still remains as uncertain as ever. There are still many issues the Greeks must hammer out for themselves WITHOUT the interference of the Troika. While the people have clearly expressed their unwillingness to entertain any more pro-austerity policies crafted by the “moderate” coalition government of PASOK and ND, they have not made clear whether they will ultimately embrace the policies of the far left or the far right, or a combination of both.

There are both major advantages to be had and major pitfalls to be encountered with either one. What is clear, though, is that a turn too far to the right, i.e. to the Golden Dawn neo-nazi party and its policy platform, may be a turn into the most bitter parts of European history in the 20th century. It would be tragic for the Greeks to finally escape an oppressive EU regime only to fall under the dictates of an equally oppressive/dangerous reactionary regime, which would also have consequences for the rest of Europe and the world. Maria Margaronis describes Greece’s sudden “leap into the dark” in an article for the Guardian.

Greece takes a leap into the dark, driven by defiance and despair

The message of Sunday’s election in Greece is clear: the Greeks have said no to more of the cuts and austerity measures that have devastated the country, pushing unemployment above 20%, shattering the healthcare system, tearing families apart and leading some to suicide. It was above all a vote of rage against the two major parties, Pasok and New Democracy, which between them ran the economy into the ground, signed up to a disastrous austerity programme in exchange for dead-end bailouts from the EU and IMF, and then allowed the blows to fall on the most vulnerable.

The medium, though, is more confused and troubling. As elsewhere in Europe, the draining away of the centre has revealed a jagged landscape: the shorthand of “extremes of left and right” doesn’t begin to map it. The most obvious rift in Greece in the last months – a rift that’s been described to me more than once as a “civil war”– has been between those who are for and against the “memorandum”, the EU/IMF schedule of demands. The pro-memorandum forces want to keep Greece in the eurozone at any cost; most of their opponents also want to stay in Europe – but not of “Merkozy”, austerity and the banks.

Across that rift runs an older, deeper one, whose roots go back at least as far as to the actual civil war that followed the Axis occupation, leading to 30 years in which the left was outlawed, and culminating in the neo-fascist junta of 1967 to 1974. The social and political collapse brought by the crisis has revived those memories, too, as well as old family loyalties. In the summer of 2011, when the aganaktismenoi (“outraged”) of Syntagma Square briefly became the darlings of the foreign media, conservative truck drivers could rub shoulders with eco warriors and direct democracy mavens; the Greek flag could stand for self-determination as well as nationalism. But not any more.

The biggest shock of yesterday’s election was the arrival of the neo-Nazi Golden Dawn in parliament, with 21 out of 300 seats and 7% of the popular vote – the first neo-Nazi party to enter a European assembly since the second world war.

Its leader, Nikolaos Michaloliakos, threw Greek journalists who wouldn’t rise for him out of his press conference and dedicated his victory to “the brave boys in the black shirts”. “Those who slander us,” he barked, and “those who betray this country should be afraid: we’re coming.” Near Kalavryta in the Peloponnese, the site of one of the most terrible Nazi massacres in the 1940s, Golden Dawn graffiti calls for “a new Holocaust to clear the filth from the country”.

It’s not yet clear, demographically, where this horrifying surge has come from. But Golden Dawn won votes across much of the country – and not just in the inner cities, where it is encouraging the persecution of immigrants and woos old ladies with offers to escort them to the cash machine. It also got the votes of one in 10 young people. Adding Golden Dawn’s vote to those of the other two far-right parties, Laos and Panos Kammenos’ Independent Greeks, one in five Greeks voted for rabid nationalism and anti-immigrant rhetoric.

Three things have nurtured the rise of Golden Dawn and its less flagrant cousins. First, the humiliation and rage provoked by the austerity measures and by the crude scapegoating of Greeks abroad; second, the presence of thousands of destitute migrants desperate to go north but trapped in Greece by the EU’s cynical migration policies; third, the fact that mainstream politicians – especially but not only conservative New Democracy leader and likely new prime minister Antonis Samaras – have shamelessly pandered to their blood-and-belonging nationalism. Samaras has promised to support the church and religious education and to repeal a law giving citizenship to children of legal immigrants; one of his campaign ads featured Hagia Sophia in Istanbul, the lost cathedral of Byzantium and symbol of Greek irredentism, shorn of its Ottoman minarets.

The other surprise winner inlast night’s election was Alexis Tsipras’s Syriza, the Coalition of the Radical Left, which easily beat Pasok to second place, sweeping all of the greater Athens region and Thessaloniki. But predictions either of a revolution on the edge of Europe or of a miraculous rebirth of radical politics are a little premature. Syriza is not so much a party as a campaign coalition, the product of repeated efforts to bind the fissiparous Greek left into an electoral force. Its deepest historical root is in the old Eurocommunist party, but it includes a range of tendencies from Trotskyist to left nationalist, from Maoist to green.

Tsipras’s stroke of genius in the election campaign was to offer a political home to a broad spectrum of anti-memorandum forces: the trade unionists disillusioned with Pasok, the protesters in the squares, the occupiers of schools and government buildings, the organisers of solidarity networks and barter systems and alternative micro-economies. His popularity surged a few weeks ago when he proposed a government of the three left parties, including the Communists (who would never allow such a thing). Adept at being all things to all potential constituents, he has made few proposals for reform beyond making the rich pay tax; he speaks easily of “the people” and has implicitly compared himself to Chávez and Allende.

Tsipras is the man of the moment, the one who has managed to channel a diffuse but powerful hunger for rebellion and release; but beyond rejecting the memorandum, it’s not clear what he plans to do with his new power. Like all left populists, has a nationalist streak: he condemned the last government for being “not quite Greeks”, and though he has been impeccable on race and immigration, he hasn’t ruled out co-operating with the hard-right Independent Greeks on the issue of the memorandum.

Greece has said no to austerity; it isn’t clear what it’s said yes to yet. Much will depend on what kind of government, if any, can be formed out of the fragments and on what happens elsewhere in Europe: on whether François Hollande sticks to his promises, on next year’s election in Germany. Driven by a heady mixture of defiance and despair, the Greeks have taken a frightening, thrilling leap into the dark. We can’t know yet where it will take them, or the rest of us.

Home › Forums › A Defiant, Yet Desperate Leap Into the Dark