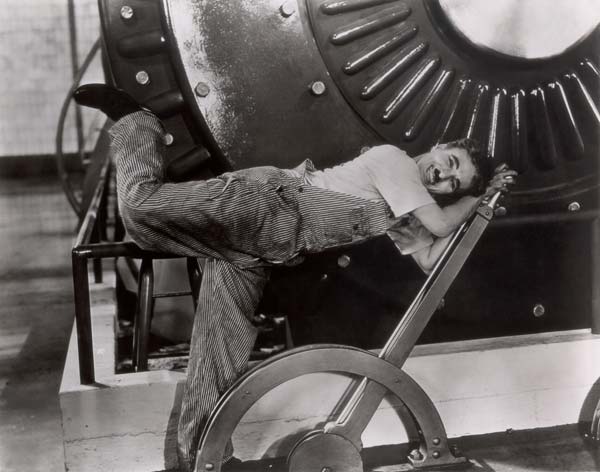 Chaplin – "Modern Times": A story of industry, of individual enterprise – humanity crusading in the pursuit of happiness

Some of our readers have been wondering why we spend so much time covering the situation in Europe. The relevance of the European situation is not perhaps immediately obvious to those geographically far removed, with a temptation to ascribe the problems of the European periphery to locally-specific conditions.

However, the global economy is exceptionally integrated, and what happens in one location all too readily leads to financial contagion – the spread of fear, from one asset class to another, or from one country to another in the case of sovereign debt risk.

Europe is the epicentre of phase II of the credit crunch, from which waves of financial contagion can be expected to emanate for the next several years. Several member states are effectively at, or near, sovereign debt default, with the potential to trigger credit events in the credit default swap market. Banks are over-leveraged, often highly disproportionate in comparison with their host economies and intertwined with the sovereign debt issue.

In many EU member states there are housing bubbles far larger than the American one that began to burst in phase I of the credit crunch (October 2007-March 2009). Bubbles in some states have already burst, while in other countries, housing markets are going illiquid and prices are beginning to decline. As the value of collateral falls, and economies slide deeper into recession and high unemployment, the leveraged debt will be unsupportable. Personal debt is often sky-high, even in countries which are currently considered wealthy and stable.

What is unfolding in Europe is highly relevant to the future of the whole global financial system, and where Europe is leading – into debt deflation, liquidity crunch and depression – many other countries will follow over the next few years. We are in the process of crashing our global operating system, as we did on a smaller scale in the 1930s. Our global credit bubble has peaked, and the debt created in the expansion years – excess claims to underlying real wealth – will not be able to be repaid.

The gargantuan pile of interlocking human promises will become nothing more than dashed expectations. The resulting credit collapse will crash both the money supply and the velocity at which the remaining money circulates in the economy, leaving too little money in circulation to support much economic activity. Credit bubbles bring forward demand by artificially stimulating it, but when they burst, the demand borrowed from the future must be repaid.

Under such circumstances, economic systems, both public and private, seize up. This is what we have been predicting at The Automatic Earth since its inception, and we are now watching it unfold. As we wrote back in June, we are already seeing what a liquidity crunch looks like in practice in places like Greece, where the creeping paralysis in essential services continues to spread:

In every one of Thessaloniki’s 13 hospitals, in Greece’s second largest city, doctors are “playing God,” as Leta Zotaki, head of the radiology service of Kilkis Hospital in the north of the city, puts it. "When we start running out of x-ray films, we have to decide who needs to be examined first; we trade with other hospitals or ask the patients to pay for the film,” explains this trade unionist, who saw her 4,000 euro salary cut by half, and whose night shift hours have not been paid since May.

Some nurses have put up a note on the door of one of the hospital rooms: "When visiting your relatives, don’t bring chocolates, buy them toilet paper,” the note reads. There is a shortage of everything: latex gloves, cold pads, reagents for blood tests and catheters. The only upshot is the fact that public hospital workers have not yet been laid off yet – like they have in other public service sectors. But the doctors who are leaving – who have either retired, or left for private hospitals or abroad – are not being replaced: in Kilkis, the number of doctors has gone from 160 to 125.

The single currency has acted as a straight-jacket, binding disparate economies together and treating them as equivalent from a risk perspective. Bond spreads reflected this perception from shortly after the introduction of the euro until the financial crisis of 2008, but the fiction of equivalence has since come under increasing pressure. 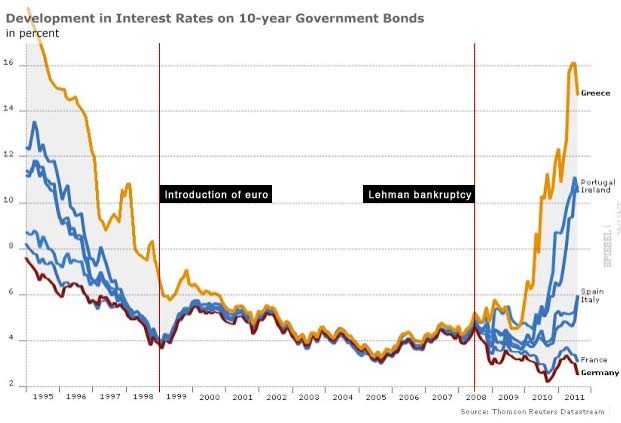 Internal tensions have been building as the disparities between centre and periphery become increasingly apparent, and national interests increasingly diverge – not just between centre and periphery, but also between core states France and Germany. Germany preaches austerity for the periphery and suggests it for France, which resents the interference and makes a last futile attempt at stimulating growth in an era of deleveraging.

When national interests are paramount, there is no real defence of the collective, and when the pie is shrinking, rancorous internecine conflicts become increasingly probable. We are already seeing the blame game begin in earnest in Europe, notably on the European Day of Action on November 14th. The rest of the world does not appear to realize either how serious the situation in Europe is becoming, or that a similar dynamic will take hold in many other places. 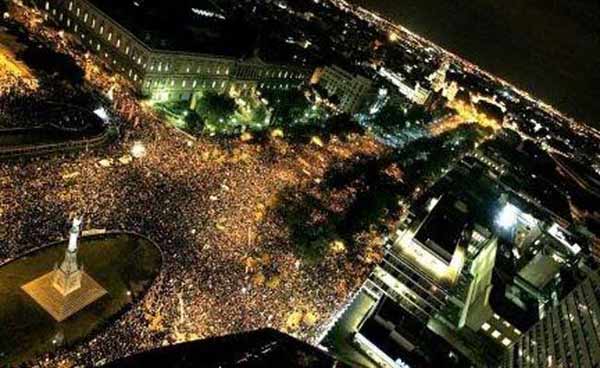 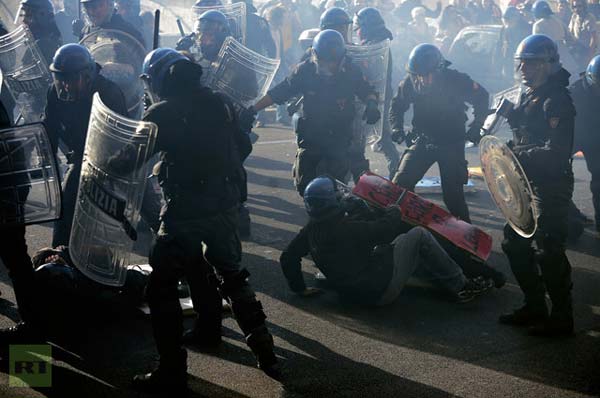 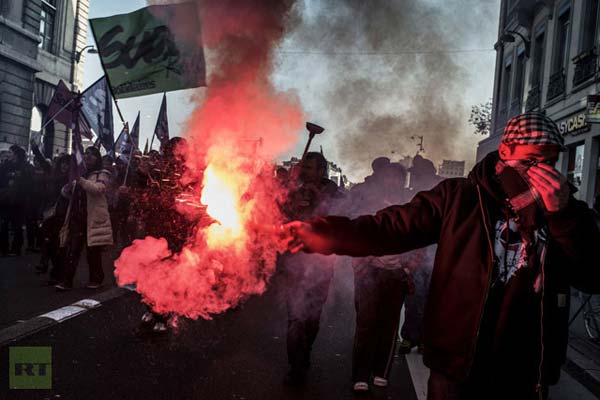 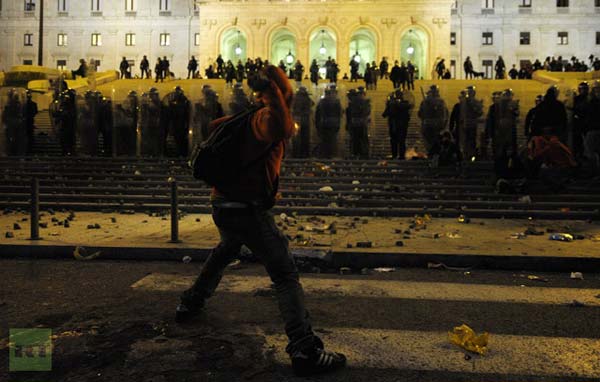 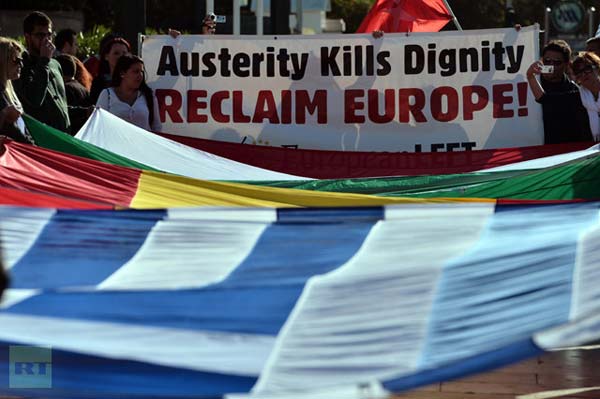 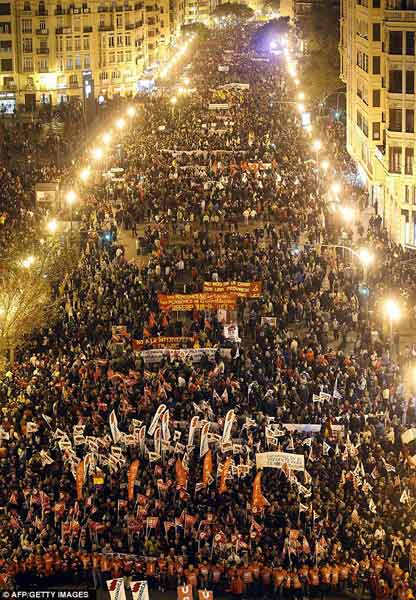 The immutable centralizing force that the single currency represents has allowed tensions to build as disparities have grown. Its rigidity prevents accommodating those disparities with devaluation, while the leverage and interconnectedness of the banking system preclude restructuring the unrepayable debt. Austerity appears to be the only remaining option, and yet by forcing economic contraction, it hastens, rather than avoids, default.

The fundamental problem is the debt exceeds the capacity for either repayment or for bailout by prospective lenders of last resort. This is the issue that much of the rest of the world is also facing. European attempts to deal with it by generating ever greater amounts of debt foreshadow the failure that other governments will face as the same situation engulfs them.

Following a long series of limited and ineffective bailouts, the ECB has promised unlimited bond buying to support sovereign debtors (in exchange for a major hand over of sovereignty). Promises of unlimited intervention issue a challenge to markets to call the bluff, leaving a substantial vulnerability with no back up plan. In the not too distant future, the markets will be trying to discover where the real limits of intervention lie. Other countries, notably the US, which have made similar 'unlimited' promises, should take note. Nothing is ever truly limitless.

The long countertrend rally has been relatively kind to governments and central banks. US-style quantitative easing and European stability funds have appeared to make a difference thanks to the temporary suspension of disbelief. Resurgent optimism – the primary driver of the rally – has reached a crescendo rivalling previous market peaks. Previously bearish commentators are capitulating to the erstwhile uptrend and thanking central authorities for saving the global financial system. This irrational euphoria is typical of market tops, and provides a good contrarian indicator that the rally in the last holdouts is finally over.

Governments and central banks are actually powerless to prevent an epic deleveraging. They may appear omnipotent during expansions and rallies, but this is an illusion. The lesson of history is that once a very large bubble has developed, generating excess claims to underlying real wealth for many years, those excess claims will be rapidly and messily extinguished in a period of deflation. Smaller bubbles may not exceed the capacity of a lender of last resort, but this one – the largest in human history – most certainly does. The fall, when it comes, will be one for the record books, as contractions are typically proportionate to the scale of the excesses in the preceding bubble era.

Congratulations given to central authorities are highly premature, and their reputations are set to take a very large beating over the next few years. It is dangerous to encourage people to think one all-powerful and in control. It may be a confidence booster in the short term, but in the longer term it only leads to people thinking one could and should have done more, when in fact there are no solutions to deleveraging running its natural course following a bubble of this magnitude.

One look at the unedifying spectacle unfolding in the US in response to the looming fiscal cliff is enough to illustrate the petty powerlessness of governments. To review for non-Americans, the fiscal cliff refers to the expiration on January 1st 2013 of a $500 billion package of tax cuts and emergency spending measures amounting to perhaps 4% of GDP. A bipartisan agreement is necessary if the can is to be kicked further down the road. Another would be necessary to raise the debt ceiling again shortly afterwards. Of course achieving an agreement would amount to a temporary stop-gap measure rather than a solution, but it appears a highly polarized group of legislators might even be incapable of that.

The division between parties, and increasingly within, in the US is reminiscent of the divisions at the national level in Europe. When the pie is shrinking, the larger picture, and the interests of the larger group are lost. Functional entities are smaller than before, with narrower scope of interests and therefore much less overlap with each other. The Republican Party in particular is tearing itself apart over its recent election loss, and retreating into factionalism. Bipartisan compromise is rapidly becoming impossible in a highly charged political environment where compromise is seen as betrayal of partisan interests.

Fiscal tightening is inevitable this coming year in the US whether or not a deal is reached at the federal level. States and municipalities are also reaching limits, as we covered early last year, and many are on the verge of bankruptcy. They have made too many promises, and now those promises that cannot be kept, will not be kept. A wave of both public and private debt default at all scales is coming, and the US will be following Europe as liquidity crunch morphs into depression.

This is not what recovery looks like, either in the US or in Europe. Recovery will only be possible once deleveraging has run its course, and at this point it has barely begun. Quantitative easing has never made a meaningful difference to the real economy. The numbers, large as they appeared, were not significant in comparison with the outstanding debt, and funds were not being lent out. The fear has been that 'money printing' would lead to hyperinflation, but deleveraging can occur much more quickly than any central bank can monetize debt. 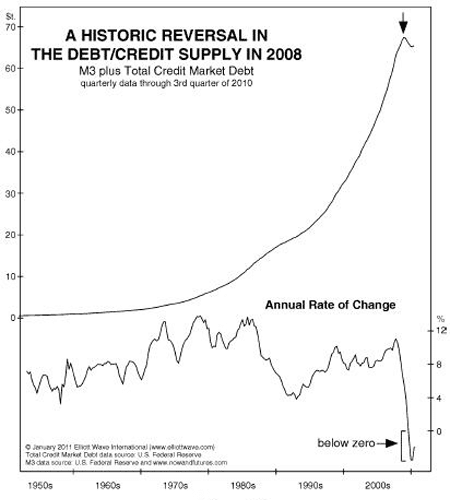 When bubbles burst, there is always an undershoot. 2008 was nothing more than a warning shot across the bow. The main deflationary event is underway, but has not yet reached a tipping point and substantial pick-up of momentum. It will do, and when it does, markets and economies could find themselves in freefall. Europe is leading the way this time. Others would do well to be forewarned.