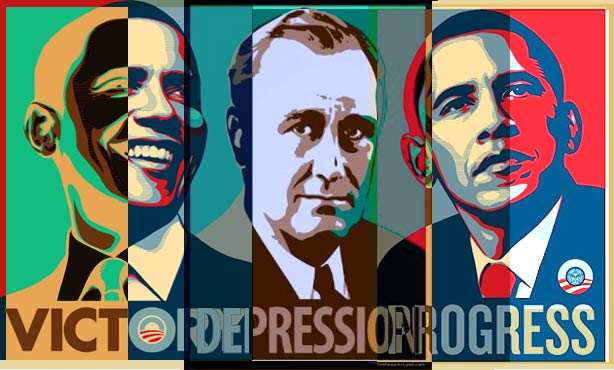 Barack Obama has one last, fleeting chance of becoming known to posterity as a Great President.

His first four years were nothing to write home about, but with the burden of seeking re-election gone, you could argue that he can now throw off the shackles that held him back – and down – since January 20, 2009, and at last show his true face and intentions.

If he keeps up what he has done in his first term, Obama will go into history as an utter failure – and likely worse than that -, as a president who had a shot at greatness and blew it spectacularly. And moreover, as a president who led his country instead of into greatness, into disaster. For its people, that is. Not so much for those who financed his political campaigns. But then, Obama has no more campaigns to run or have financed.

These days, the media bombard us with stories about the "Fiscal Cliff" negotiations. They do that in the same way that they presented the race for the presidency over the past year: they pretend there's high tension and big decisions to be made. Both are fake stories, aimed at generating attention, expressed in advertisement revenue for the media and credibility for the political system.

In reality, there never was a tight presidential race. As a consequence of that, nothing about the fiscal cliff would need to be tight either. And nothing really is. It's theater.

The carefully hidden reality is that the Republican party could never even post a viable candidate for president (and that's presuming it tried). A reality that was "prudently" hidden from view by media and pollsters alike, who depend on tight races to quite simply make money. They have a huge incentive to make up such a reality if none is there. The only pollster who refused to go along with the mass deception was Nate Silver in the NYT, and his predictions therefore varied wildly from all others.

Mitt Romney never had a real shot at the presidency. Ever. For one thing, economic numbers were never bad enough to unseat the incumbent. For another, the GOP never learned the groundswell lesson Obama's Democrats should have taught them 4 years prior: get volunteer feet and boots on the ground. And not just in large, but in humongous numbers. Which is what the Obama campaign successfully did in 2008. The fact that nobody but those blinded by love or personal interest "believed in Romney" sealed the case. The average American disliked the guy so much he couldn't have done worse if he tried.

A direct consequence of all this is that – most of – the Republican party and its financiers never even saw coming what had long been inevitable. They were consistently fooled by their own pollsters, as well as by Gallup et al, which were or at least seemed aiming exclusively at telling them what they wanted to hear. And that in turn makes the GOP and everyone in and around it a bunch of broken winged negotiators. Guys like Grover Norquist and John Boehner, let alone Paul Ryan, are lame sitting ducks. The GOP will come back, and probably in a more extreme version, but for now they're nowhere.

Obama today can easily overpower the lot of them. All the president needs to do in order to succeed in that is to grow a pair. Will he? I'm not holding my breath; he hasn't for four years. But if he does, he can go far.

Barack Obama could rule from a position of force, of great strength. He doesn't have to let anyone or anything stand in his way anymore. Not the Republicans, not his own party, not even his sponsors. He's free to act as he sees fit. Sure, he will risk getting shot, but that's part of the job risk for any president.

To achieve greatness for the history books, he needs to use his present position to go after Wall Street. It's his only shot. It's that simple. Plus, if he doesn't do it, he’ll go down as one of the worst US presidents, as a man who let America slide into unfettered mayhem. Not even a comprehensive gun control law would do it. Not even close. Then again, the power he showed in his Sandy Hook speech can come in handy.

There is no need to negotiate with Boehner and his politically paralyzed ilk. No need for far reaching compromises. Obama can simply dictate his terms. And threaten Executive Orders up the wazoo. So what if the GOP holds the House? They have nothing. If you can't even field anyone, not one single person, who can seriously run for president, you're not a serious American political party, and you don't get to raise your voice at the table. Not if you're facing a guy with balls.

Great presidents? I still hope naming Reagan one is a joke that will soon pop, but at the same time it says something. No matter what you fail at in the job, in the end it's all about economic numbers. And Reagan happened to preside over a rising tide. And it apparently, or let's say according to public perception so far, makes no difference that he did and could because he launched the age of leverage that has steered us towards the debt crisis we're now in. That age is now over, despite all the protestations to the contrary, and all the rosy recovery tales, and Obama has to deal with the tail end of it.

So far as far as we've seen his answer has been to play along with the boys who've profited from that age of leverage. And yes, of course, they've got him where he is; no matter what the groundswell volunteer masses have done, without incessant TV coverage you can't be elected US president anymore. And it just adds to the irony that those two sides are 180 degrees apart. If not more.

At this point in time, Obama no longer has much need for either. He doesn't need the volunteers to call every single US citizen, and he doesn't need the rich and powerful to get him on TV. And so now he has to make a choice, perhaps the biggest one of his life: who's he going to be faithful to? Can't have both anymore.

FDR, though he was a politician first of all, when facing a similar choice, made that choice quite convincingly. And, mind you, did a substantial part of it through issuing a flood of Executive Orders.The most important decision he made was not launching the New Deal, but to clip the wings of the financial industry. Glass Steagall was a major part of that. The New Deal was big, but the crisis itself still didn't finish and vanish until WWII started. The single best sign, perhaps, of how deep the Great Depression crisis was.

Barack Obama has no fiscal/financial room for a New New Deal. But he does have the space and clout to cut down the financial sector to size. And if he doesn't, he’ll go down as quite likely the worst president ever. And that's saying something: there've been a few real stinkers.

When Obama announced his financial team in late 2008, I wrote at the time that that was pretty much it, and we had nothing positive to expect. He appointed Robert Rubin's pet-boy Tim Geithner, and Robert Rubin 's right hand man Larry Summers, and, behind the scene, Robert Rubin himself. A former (26 year) Goldman man who had been, a decade previous, one of the driving forces, along with Alan Greenspan, in getting rid of Glass Steagall.

A campaign that was basically calling FDR stupid. Americans don't have long memories, so you – can – have the same crisis every 70-80 years. Like a Kondratieff cycle. Well, it’s been 80 years since 1933s Glass Steagall. Which came after the Panic of 1857 and James Buchanan's "Reform not Relief" speech. Which at least clipped the banks somewhat.

Now, Summers is gone, and Geithner is going. So all we need to do really is to wait for Obama to announce his new team. If it consists of more of the same, Goldman connections and all that, forget it. That's when we’ll know Obama has decided to go full blast with the same old same old which has brought us the debt crisis in the first place, and which has concealed its effects so well today that many if not most people believe we're on a road to recovery. Which would serve to prove that you can solve debt problems with more debt. Which you can't.

So, yeah, alright, let's wait and see. We have a president for the next four years, if he lasts that long, who has a pretty unique opportunity to do the right thing for his people, for the ones who campaigned and voted for him hoping and believing that he would fight for their causes and interests. As for trying to fool them into thinking that their interests are the same as those of the major banks, the 'Too Big to Fail' principle, that one's real old and tired.

Sure, you can get them through another holiday season brimming with hope and all sorts of fairy tale stories, but it'll be January 1 at some point soon, and it'll be cold and dark then and the plastic will need to be paid off and they'll only still work at McDo's if anywhere. While the likes of Angelo Mozilo and John Thain have never even stood trial, let alone served time, and bathe in billions of ill-gotten gains. That kind of twisted justice will not stand forever.

We’ll know pretty soon if President Barack Obama is serious about providing truth and justice to his voters, and about defending them from interests hostile to them. If he decides not to, the first black US president will be seen as the worst one ever – quite a responsibility, come to think of it -. Things might look nice economically right now, but that won't last.

Instead, Obama could use his unique gifts, his charisma, his oratory skills, as so convincingly exposed once again in his Sandy Hook speech, for the people's good, not to fool them any more than he's already done. Separate consumer banking from investment banking, open up the boiling vaults of derivatives, let go broke who invested stupidly, and send those to jail who did so illegally. It's not exactly complicated.

The only thing that does complicate this is that, as I said before, if you allow money in your political system, money will inevitably end up buying up that entire system.

Barack Obama is in a position where he can't be bought anymore unless he chooses to be. He has one last fleeting chance left to do the right thing for his people.

Illustration: Ilargi for The Automatic Earth