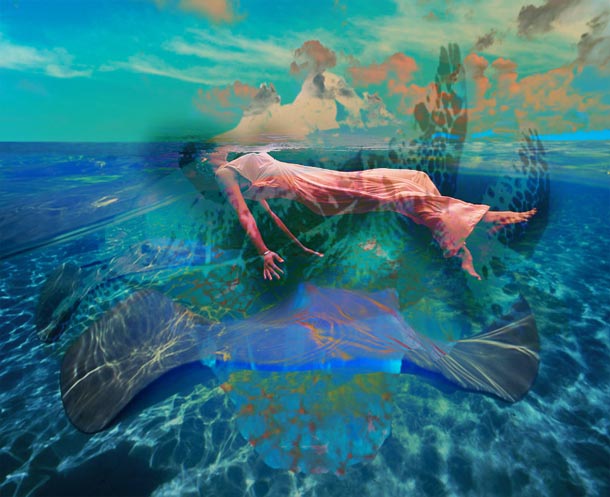 Artwork: Ilargi for The Automatic Earth

We've sort of run out of ways to describe the skewed perceptions and/or skewed realities of the politico-financial world we inhabit. Metaphors like Bizarro World, Kabuki theater and Theater of the Absurd have come and long gone and are now used only by those who missed out first time around.

But that doesn't mean it's all become less weird; if anything, one gets the feeling the media in general are becoming more complacent if not complicit painting a picture for the general public that's at best make believe and in all other cases border on Orwell. There's a veneer an inch thick (and getting thicker fast) that makes things look sort of normal, just check the economy, and below that there's an increasingly nasty brew boiling and a-festering.

Depending on where one would like to start counting, we were entertained for 6 to 12 months by a B-movie posing as a US presidential election. The outcome of which was clear months in advance, since one of the candidates never was one. Still, you wouldn't have known it from the news you were fed. Poll after poll after poll provided a picture of a terribly tight race, so you would keep being glued to the tube, providing legitimacy to the system and advertising dollars to the major networks and leading papers.

Not even the fact that one of those papers consistently published a poll that diverged from all others so much that no-one quite believed it, could break the spell. Say what you will, but they all stuck to the script in admirable fashion, so much so that the poll in question, Nate Silver in the New York Times, didn't even tempt anyone to blink.

And now, 2 months after the election that never was, there still hasn't been a single voice who seriously wonders what on earth Gallup has done to its professional reputation. let alone why. Despite the fact that it was so tremendously wrong for so long you'd have to be king of gullibles island to ever read another of its surveys. Gallup need not worry: there's a nation full of pretenders to that throne. And who don't care that Romney's own kid said his dad never wanted to be president to begin with. Which was fine all along, since there was no chance of that happening. Unless Obama would have indecently exposed himself on national TV, or tried to ban all handguns.

What Gallup did is deceptively simple. The US is so polarized today that most states and counties are either red or blue before anyone even casts a vote. It's only in small pockets that there is anything obscure about outcomes. Don’t effectively weigh the impact of those pockets, and you will always have the picture of a tight race. Can't miss. Focus on them, though, and the picture changes dramatically. Enter Nate Silver. If he were a gambling man, he could well be very wealthy today.

After that drawn out non-event there were two weeks of relative quiet, and then we went head first into the next: the fiscal cliff. And wouldn't you know, that too went down to the wire. Very very last minute, with all these fine millionaires serving the public flown back in from their holiday homes for good measure and dramatic effect to agree on a piece of paper that could have just as easily been written 3 months before, and probably was too.

The Republican party is a dead duck sitting in the water. If you can't field a credible candidate for president, all power you have left is what your opponent allows you. Which is of course in this case very eager, for obvious reasons, to keep up the appearance of a functioning system, a democracy no less. Hence the ongoing performance. With a script as predictable as a syndicated crime show, and actors of the same quality. A combination that proves itself on a daily basis in primetime, and one the public has faith in.

Enter 2013, and this time around, there were no two weeks of quiet, we went straight from one crisis that was none to the next that isn't: the debt ceiling. This episode of CSI DC will be a long drawn out one – March 1 is the key date – , like the election, only much more intense than that was. We'll be bombarded by the media with clowns, actors and pundits peddling far-fetched problems and solutions with passionate intensity until every single one of you has drifted so far away from any sort of comprehension of the topic that you give up trying, plead insanity and pray to the White House for delivery. And only then shall you receive. Obama started out warning of "catastrophic consequences". Just like the last time around.

The US won't hit the debt ceiling. All the stories already doing the rounds about the 14th Amendment or a platinum trillion dollar coin serve only to dress the windows so much you can't see what's going on behind them. And to put rich food on the media table. Can you imagine the amount of advertising revenue they would miss out on if these three events could not be presented the way they are, as tight races that decide everyone's future? The only alternative for them would be to invent stories out of thin air. Imagine that.

There is no debt ceiling issue simply because the GOP, even if it would want to show its muscle by drawing the country into that fight, has no such muscle. At present, they're just a bunch of unguided missiles looking so desperately for a target they forget to launch in the first place. While the Democrats are the outer layer of a slick bank machine built to always and on every transaction give back less than you and everyone else put in. A quasi-perpetual money maker that they’ll keep running as long and as far as they can. The golden egg at last.

The only thing you can really be sure of is that the debt ceiling non-crisis will be averted with measures that will cost you dearly. The fear of the debt ceiling that has been instilled in you will be used to further strengthen the grip of the financial industry on society at large. The adagium is to never let a good crisis go to waste, and if there is no crisis, you create one.

And in case it wasn't clear yet: all the hullaballoo from crisis to precooked crisis serves to hide an infinite number of other, real, crises. Like, where's the media attention for the reports about the FBI, Homeland Security, the Joint Terrorism Task Force, the Naval Criminal Investigative Service, the Domestic Security Alliance Council and the Federal Reserve all teaming up with Wall Street banks to bring down the Occupy movement?

One advantage from a power point of view of having a country so loaded with guns it defies gravity is that everything and everyone can be labeled a terrorist first and talked to later if at all. Occupy is not the first example of this, but it does stand out. Just not in the media.

There are scores of Americans preaching the right to bear arms from their rooftops who are under the impression that it's something their government tries to take away. They should consider the option that perhaps the government loves them having all their guns, because this way they can – much easier and more credible – be labeled as terrorists and targeted with drones, chemical weapons, ultrasound, viruses, you name it.

What the Occupy example shows is that the state apparatus serves those who hold the power and the money instead of serving the constitutional principles of the democratic system. And if you as much as voice your opposition loud enough you're a terrorist before you can say you're sorry, and an enemy combatant just for having a gun at home to protect your family. The presence of all those millions of guns the constitution intended to state you can hold to protect yourself from your government is all the pretext that same government needs to clamp down on you with weapons you paid for but can't buy even in America. In that bright light, it's no coincidence that Obama's CIA nominee John Brennan would long have been nicknamed Dr. Drone, if only anyone had ever heard of him. His time has come.

Still, most of all what this crisis to crisis circus seeks to hide is a fast deepening financial disaster, even as no-one has been persecuted or gone to jail. And as we speak, banks sign off on more foreclosure fraud with mere fines, while at the same time managing to have regulators loosen more rules such as the Basel ones, intended to make sure any next crisis would be less severe. In other words, absolutely nothing has been done or is in the process of being executed to smoothen the effects of the financial meltdown on Joe and Jane. Quite the opposite, they are set up to pay up for the damage the bank owners and their lackeys have suffered. And the media faithfully report an economic recovery. Just for good measure.

America, you're being punked.

Home › Forums › One Inch Below The Surface (America, You're Being Punked)