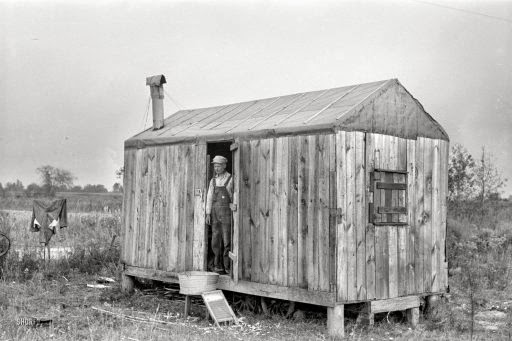 “Shack of day laborer near New Iberia” UPDATED: It’s always amusing to peruse the press and find stuff that just doesn’t hold up. Not for a big analysis, just a chuckle, albeit with a serious undercurrent. I’ve explained a hundred times that the prize Bob Shiller was awarded on Monday is not a Nobel prize, but a cheap fake, and I’ve looked for the correct name for it, Notbel, NoNobel, Fauxbel, but that ground has been covered and Shiller got the thing and why dwell on the stupidity of it all indefinitely?

Besides, just because the award is fake and economics is no more of a science than chocolate chip cookie baking and never will be, doesn’t mean that Shiller never said anything useful. Or has he? Why don’t we let the double clown act of Cameron and Osborne that – by the looks of it – tries to bring Britain to its knees, decide about that?

A week ago in Gordon Gecko Moved To London, I wrote about the UK government’s various blindingly bright ideas for its economy, like for instance “a new fiscal mandate that will require further welfare cuts to build an overall budget surplus by the end of the next parliament”, with the 2013-14 budget deficit of £120 billion to fall to £43 billion in 2017-18. The money saved through the £77 billion in welfare cuts to the poor will be used to hand money to the corporate world to achieve the myopic pipedream of “100,000 more companies exporting and a doubling of our exports to £1 trillion by 2020”, the latter being an exact copy of Obama’s earlier goal for US exports, an equally unrealistic piece of cheap political yada yada.

And of course Cameron and Osborne have their Help-to-Buy scheme, through which (especially first-time) buyers can get interest-free loans for 20% of a home’s purchasing price, and lenders a government guarantee of 15%, a plan ostensibly concocted because, in Cameron’s words: “The mortgage market today isn’t working … “, “There’s a market failure going on which the government is helping correct.” . In reality, the market is working fine, just not the way the government would want it to. As I said:

I try to use the term “perverse” sparingly, which is not easy, because so much in our economies has been perverted one way or another, but this is a really good example. Cameron says it’s not fair that only rich kids can buy houses, but his Help-to-Buy scheme in fact makes houses more expensive, which means the not-so-rich will now need to go deeper into debt to buy the same house, if they can still afford it at all. With an average full-time salary of £26,500, the £600,000 properties are off limits to them. Those will go to [the] rich kids, who now can buy them at much more lucrative terms, like a £120,000 interest free loan (about as much as the poorer can spend on an entire house). So most of the booty will go to people who probably don’t even need it, while the price jump the plan results in pushes the not-so-rich either off the market or deeper into debt than they would have been without it.

You see, Cameron stated that “The current system only allows people to buy homes if they have rich parents and that “is simply not fair“. Now, there are two different approaches to this, provided you think one is needed. You can either simply wait until prices fall enough for people who don’t have rich parents to buy a home, or you can lend them money to buy a home. The latter approach will in and of itself lead to higher prices, but only initially. What happens after the policy is ended is another matter, and certainly chances are that prices will fall again, leaving buyers with mortgage debts that are higher than the (re-sale) value of their homes (why does that sound familiar?)

That’s what we call a bubble. And yes, we’re only now in the later stages of the last housing bubble, so why insist on blowing another one? Well, obviously, because falling prices are a threat to the existing economical system, and it’s so amazingly simple to declare that “this is not a bubble”.

Unfortunately for Cameron et al, Robert Shiller doesn’t care one bit about their statement that “it isn’t fair”. And he was just awarded the Fauxbel, while they were not. So either they should call the guys who award the thing and insist they made a terrible mistake, and suggest they themselves should have been awarded it, since they, to judge from their policies, think they know better than Shiller, or alternatively they should call an immediate halt to Help-to-Buy and apologize to everyone who used the scheme to purchase a home, and not least of all to Robert Shiller.

So what has Robert Shiller actually said about purchasing a house? I was reminded of this today by Sam Ro at Business Insider, who used this great title for his article on the topic:

With prices still off of their all-time highs, many can’t help but ask the brilliant Professor if now’s the time to invest in housing. And for years, he has responded with more or less the same answer: housing is not a great investment. This was an idea that he pushed in his must-read book, Irrational Exuberance.

Sam Ro then continues with a reference to an earlier article of his on Shiller (February 2013), with a not quite as great (hard to beat), but still strong title:

Robert Shiller Destroys The Idea Of Investing In A Home

Robert Shiller, the Yale economist who nailed the housing bubble before it burst, was on Bloomberg Television with Trish Regan and Adam Johnson on Wednesday afternoon to discuss the U.S. housing market. As usual, Shiller was reluctant to declare that home prices had bottomed. He explained that the housing market is a speculative one and that there’s no telling which way prices would go tomorrow. He also explained that there wasn’t much reason to believe that home prices would appreciate back to levels seen during the last cycle.

Regan followed up with a question that got Shiller perked up. “Then why buy a home?” she asked. “People trap their savings in a home. They’re running an opportunity cost of not having that money liquid to earn a better return in the market. Why do it?”

“Absolutely!” Shiller exclaimed. “Housing traditionally is not viewed as a great investment. It takes maintenance, it depreciates, it goes out of style. All of those are problems. And there’s technical progress in housing. So, new ones are better.”

“So, Why was it considered an investment? That was a fad. That was an idea that took hold in the early 2000’s. And I don’t expect it to come back. Not with the same force. So people might just decide, “Yeah, I’ll diversify my portfolio. I’ll live in a rental.” That is a very sensible thing for many people to do.”

Adam Johnson also noted that this was in line with Shiller’s assessment that real U.S. home price appreciation from 1890 to 1990 was just about 0 percent. This is explained by the falling costs of construction and labor.

For people who can’t wrap their heads around this, Shiller offers an analogy.

“If you think investing in housing is such a great idea, why not invest in cars?” he asked. “Buy a car, mothball it, and sell it in 20 years. Obviously not a good idea because people won’t want our cars. It’s the same with our houses. So, they’re not really an investment vehicle.”

In case Shiller’s message is still not clear: buying a home at a time when your government is artificially inflating housing prices is not a good idea. As a matter of fact, a house is almost never a good investment. It only seems to be one in the middle of a bubble, when prices rise enough to make people believe they will always keep rising (not a rational idea, and Shiller got his Notbel for pointing out markets are not rational, though why they were ever thought to be in the first place is beyond me). At any other time, if you need to go into debt to buy a home, it’s not a good investment. Not my words, but Shiller’s. And he’s the man of the day.

I would love to see Cameron and Osborne react to this, but I’m sure they’d avoid doing so like the plague with a toothache. Still, I can imagine them claiming that Shiller’s an American, and the British housing market is different, there’s more demand than supply, something along those lines. The reality is that it’s never different “here”, and it’s never different “this time”, other than for fleetingly short periods of time.

As for young people in Britain, it’s true that I at least partly treat this as a kind of a joke, but then, I see your entire government as a joke. Still, please don’t fall for their schemes, they don’t have your best interest at heart. Rent. Renting is not losing money, it’s transferring the investment risk to the home owner, and that’s huge in overpriced markets. Heed Shiller’s words: Housing as an investment was a fad, and “I don’t expect it to come back.” Buy only if you don’t have to go into debt to do so. We’ve said it here at The Automatic Earth for years. Wait for prices to fall. They will, guaranteed. No matter how many rich Chinese and Russian “businessmen” (nudge nudge wink wink) Cameron invites into London on a red carpet to take over from those who were born there.

Here’s the Bloomberg video in which Robert Shiller calls a home a lousy investment:

UPDATE: And this what Shiller had to say to Reuters on Monday afternoon, right after getting the nod:

One of three American economists who won the 2013 economics Nobel prize on Monday for research into market prices and asset bubbles expressed alarm at the rapid rise in global housing prices.

The Royal Swedish Academy of Sciences lauded the economists’ research on the prices of stocks, bonds and other assets, saying “mispricing of assets may contribute to financial crises and, as the recent global recession illustrates, such crises can damage the overall economy.”

This was the case in the collapse of the U.S. housing market, which helped trigger the 2008-2009 global financial crisis. Markets are at risk of committing the same error now, Shiller told Reuters after learning he had won the Nobel prize. “This financial crisis that we’ve been going through in the last five years has been one that seems to reveal the failure to understand price movements,” Shiller said. [..]

Shiller’s work led him to suggest in 2005 that the U.S. housing market might be overheating. He helped create a closely watched gauge of housing prices, the S&P Case/Shiller Index.

In June this year, he pointed to a potential new housing bubble in some of America’s largest cities. “It is up 12 percent in the last year. This is a very rapid price increase right now, and I believe that it is accelerated somewhat by the Fed’s policy,” he said.

China, Brazil, India, Australia, Norway and Belgium, among other countries, were witnessing similar price rises. “There are so many countries that are looking bubbly,” he said. [..]

“When asset prices are getting way out of line it should be cause for alarm. The monetary authorities should lean against extreme asset price movements,” Shiller said.

The bubbling housing market is not mainly the result of central bank policy, but reflects a shift toward “a more speculative attitude,” Shiller said. “We cannot expect monetary policy to cure all of these problems.”

Hansen struck a more cautious note. “We often underestimate how much uncertainty there is in terms of our understanding of the economy,” he said. “If you pretend that we know more than we do, you are in danger of constructing policies that can be counter-productive.”