Two thirds of Americans get at least some of their news on social media. Google and Facebook receive well over 70% of US digital advertising revenues. The average daily time spent on social media is 2 hours. Just a few factoids that have at least one thing in common: nothing like them was around 10 years ago, let alone 20. And they depict a change, or set of changes, in our world that will take a long time yet to understand and absorb. Some things just move too fast for us to keep track of, let alone process.

Those of us who were alive before the meteoric rise of the hardware and software of ‘social’ media may be able to relate a little more and better than those who were not, but even that is not a given. There are plenty people over 20, over 30, that make one think: what did you do before you had that magic machine? When you walk down the street talking to some friend, or looking at what your friends wrote on Facebook, do you ever think about what you did in such situations before the machine came into your life? 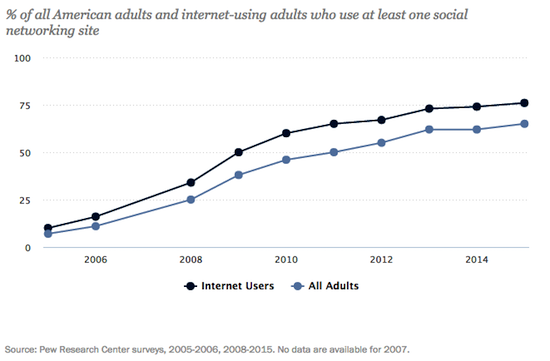 We’re not going to know what the hardware and software of ‘social’ media will have done to our lives, individually and socially, for a very long time. But in the meantime, their influence will continue to shape our lives. They change our societies, the way we interact with each other, in very profound ways; we just don’t know how profound, or how, period. There can be little question that they change us as individuals too; they change how we communicate, and in such a way that there is no way they don’t also change our very brain structures in the process.

Someone who walks down a street talking to someone else 10, 100, 1000 miles away, or sees messages from such a person come in in virtual real time, experiences things that were not available ever in human history. Our brains must adapt to these changes, or we will be left behind. And while for the over-20, over-30 crowd this takes actual adaptation, for those younger than that it comes quasi pre-cooked: they’ve never known anything else. Still, their brains were formed in completely different times too. Think hunter-gatherers. And that’s just the human part of the brain.

There are too many aspects to this development to cover here. One day someone will write a book, or rather, many someones will write many books, and they will all be different. Some will focus on people’s lives being saved because their smartphones allow them to either receive or send out distress signals. Others will tell stories of teenagers committing suicide after being heckled on ‘social’ media. With yin comes yang. Millions feel better with new-found ‘friends’, and millions suffer from abuse even if they don’t kill themselves.

With new media, especially when it goes from 1 to 100 in no time flat, it should be no surprise that the news it delivers changes too. We went from a few dozen TV- and radio stations and newspapers to a few hundred million potential opinions in the US alone. The media are no longer a one-way street. The first effect that has had is that the chasm between news and opinion has narrowed spectacularly. If their readers post their views of what they read and see, journalists feel they have the right to vent their opinions too.

And then these opinions increasingly replace the news itself. The medium is again the message, in a way, a novel kind of way. A hundred million people write things without being restricted by due diligence or other journalistic standards, and we see journalists do that too. They will come up with lies, half-truths, innuendo, false accusations, and moreover will not retract or correct them, except when really hard-pressed. After all, who has the time when you post a hundred+ tweets a day and need to update your Facebook pages too?

Obviously, Donald Trump is an excellent example of the changing media environment. His use of Twitter was a major factor in his election victory. And then his detractors took to Twitter to launch a huge campaign accusing him of collusion with Russia to achieve that victory. They did this moving in lockstep with Bob Mueller’s investigation of that collusion accusation. But almost two years after the election, neither Mueller not the media have provided any evidence of collusion.

That, ironically, is the only thing that is actually true about the entire narrative at this point. Sure, Mueller may still have something left in his back pocket, but if he had solid proof he would have been obliged to present it. Collusion with a foreign government is too serious not to reveal evidence of. Therefore, it’s safe to conclude that in September 2018, Mueller has no such evidence. But what about the thousands of printed articles and the millions of Tweets and Facebook posts claiming collusion that were presented as true?

Funny you asked. What they prove is not collusion, but the changing media landscape. The anti-Trump echo-chamber that I’ve written about many times has been going strong for two years and shows no signs of abating. There are still lots of people posting a hundred (re-)tweets etc. daily who are being read by many others, all of them confirming their biases in a never fulfilled feeding frenzy.

This is not about Trump. And I’m not a Trump supporter. This is instead about the media, and the humongous difference interactivity has made. And about the fact that it hasn’t just added a hundred million voices, it has also altered the way traditional media report the news, in an effort to keep up with those hundred million.

The thing here that is about Trump, is that he’s everybody’s favorite meal ticket. He confirms everyone’s opinion, whether for or against him, by the way he uses media. And most importantly, they all make a lot of money off of him. The New York Times and WaPo and MSNBC would be in deep financial trouble without Trump. Like they were before he came along. Polarization of opinions saved them. Well, not the WaPo, Jeff Bezos can afford to run 1000 papers like that and lose money hand over fist. But for the NYT and many others a Trump impeachment would be disastrous. Funny, right?

Another thing that is obvious is that one thing still sells above all others: sex. The smear campaign against Julian Assange has been successful in one way only, and it’s been a smash hit: the rape allegations. Completely false, entirely made up, dragged out as long as possible, and turning millions, especially women, against him.

The accusations against Supreme Court candidate Brett Kavanaugh haven’t been around long enough to be discredited. Maybe they will be, maybe they won’t. But read through newspaper articles, watch TV shows, follow Twitter, and you see countless voices already convinced ‘he did it’. And that ‘it’ is often labeled ‘rape’, though that’s not the accusation.

But it’s part of the Anti-Trump train, and the echo-chamber has gone into overdrive once again. Even if everyone understands that a 36-year old accusation must be handled with care. The accusing woman’s lawyer says the FBI must investigate, and everyone says: FBI! FBI!. Conveniently forgetting that the FBI has been far from impartial with regards to Trump, and the White House is not exactly waiting for another FBI role.

What’s wrong with waiting till you know the facts? Why judge a situation you know nothing about other than a woman accuses a man of assault 36 years ago, and doesn’t remember time, location etc.?

And that’s the thing all along, isn’t it? That people, both readers and journalists, all 200 million Americans of them, think they have acquired the right to judge any person, any situation they read a few lines about, just because they have purchased a smartphone. A faulty notion fed on a daily basis by the fact there are millions who think just like them.

We may want to rethink the terms ‘social’ media and ‘smart’ phone. They sound good, but they don’t cover the true nature of either. It’s hard to say where all this is going, but the sharply increasing polarization of society is certainly not a good sign. People feeling they have the right to accuse others without knowing facts, people building a Russiagate narrative without evidence, these are not things a society should welcome, whether they’re profitable or not.

Meanwhile, there are two people (there are many more, of course) who were banned from the platforms so many others use to draw baseless conclusions and spout empty accusations. And we miss them both, or we should: Alex Jones and Julian Assange. Have they really used ‘social’ media in worse ways than those 200 million Americans? Or were they banned because millions of Americans were following and reading their non-mainstream views?

We better get a grip on this, and on ourselves, or we won’t get another chance. What we have seen so far is that it’s not that hard to shape people’s opinions in a world with information overload. And that process is about to get a whole lot more intense. Until all you’re left with is the illusion that your opinion is actually your own.