This is another entry by our friend Euan Mearns, orginally posted at Energy Matters.

Euan: A few commenters have mentioned peak oil recently. I am cautious about making forecasts and predictions and prefer instead to observe and document the data as the peak oil story unfolds. I have in fact published a couple of charts recently illustrating aspects of peak oil, one showing a possible peak in the rest of the world that excludes N America and OPEC (Figure 1). The other showing the undulating plateau in conventional crude + condensate that has persisted since 2005 (Figure 2). In my last post on oil price scenarios two of those showed global oil production capacity 1 to 2 Mbpd lower in 2016 than 2014. If that comes to fruition, will we have passed peak oil but does it matter? 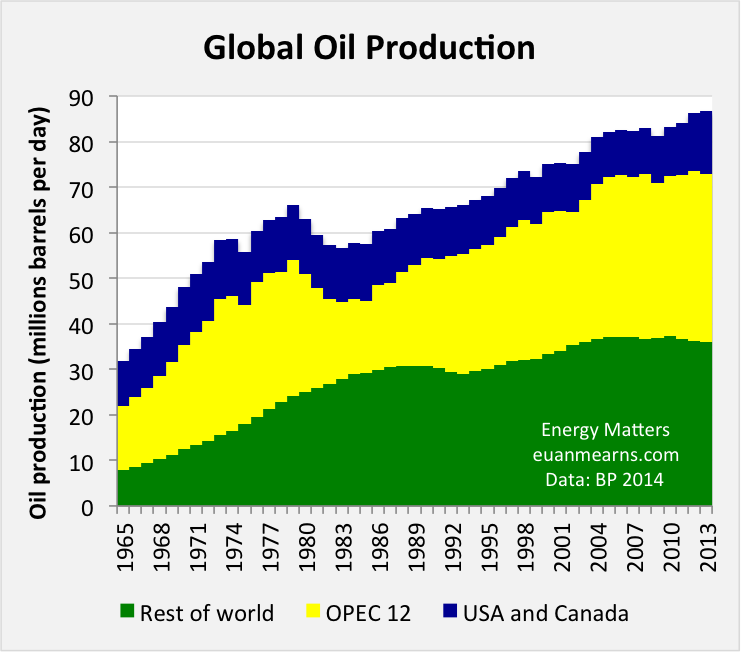 Figure 1 Global oil production has been split into three geo-political categories: 1) USA and Canada, 2) OPEC and 3) the Rest of the World (RoW). RoW production bears the hallmarks of having peaked in the period 2005 to 2010 and this has consequences for oil prices, demand and prosperity in parts of the world, especially the OECD. Most of the growth in oil supply has been in the USA and Canada where the market has been flooded with expensive oil. Data are crude oil + condensate + natural gas liquids (C+C+NGL) and exclude biofuels and refinery gains that are included by the IEA in their total liquids number.

The current “low oil price crisis” is providing a clear and new perspective on the nature of the peak oil problem. If low price does indeed destroy high cost production capacity then this will raise the question if the high cost sources can ever be brought back? IF low price kills the shale industry can it come back from the dead? 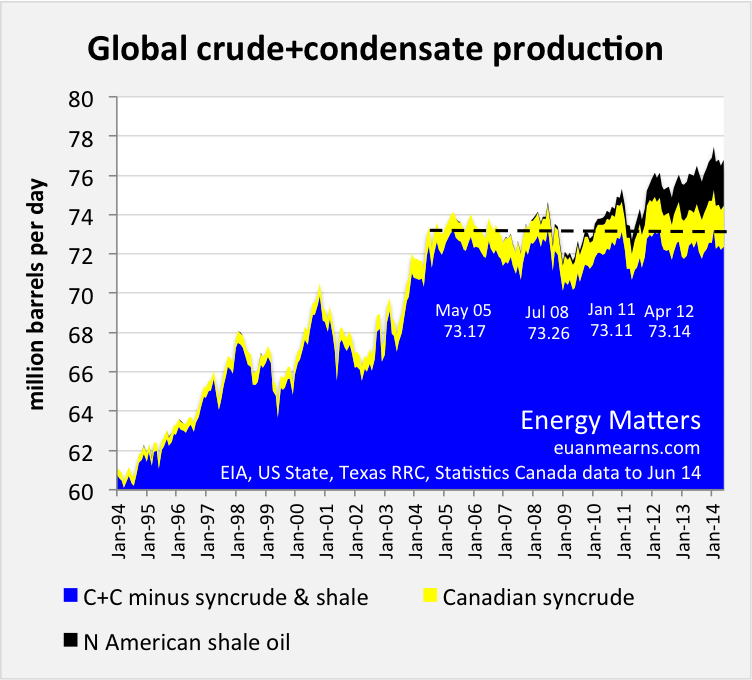 Figure 2 Conventional crude oil + condensate production has been on an undulating plateau just over 73 million barrels per day (Mbpd) since May 2005, that is for almost 10 years and despite record high oil prices! Note that chart is not zero scaled in order to amplify details. Click chart for large version.

The response of the oil price to scarcity in the period 2002 to 2008 was for it to shoot up. And the response of the energy industries to scarcity and high price was to develop high cost sources of energy – shale oil and gas and renewables. The longevity and permanence of these new initiatives has always been dependent upon our ability and willingness to pay. Of course, most of us who have cars continued to use them but have perhaps subliminally modified our behaviour through driving less or buying more fuel efficient vehicles. OECD oil consumption has at any rate been in decline and robust economic growth has been elusive. Is this due to the peak oil story unfolding?

The global finance and energy system is unfortunately rather more complex than that. The creation and expansion of debt is of course central to creating demand for oil and other energy sources. Without QE the global economy may have died in 2009 and demand for oil with it. Gail Tverberg produced an interesting chart that may illustrate this point (Figure 3). However, back in 2008 / 09 OPEC trimmed 4 Mbpd from their production and this equally explains why the price rebounded so strongly then. The end of QE3 may have contributed to the recent fall in demand, but the price has fallen so precipitously because OPEC has not compensated by reducing production. 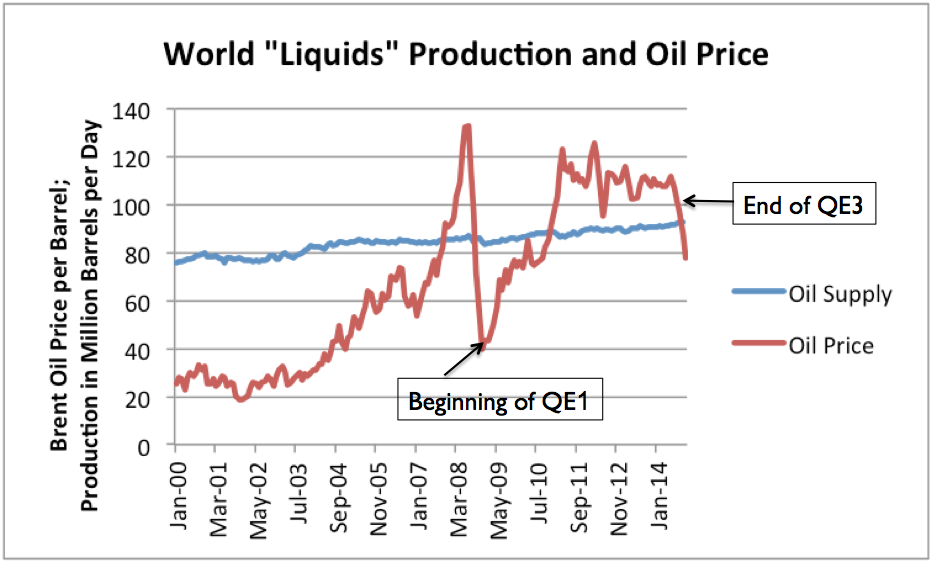 Figure 3 QE appears to have impacted demand for oil and may have created the lines of credit enabling energy companies to produce high cost gas and oil at a loss. But the oil price has been equally controlled by OPEC controlling supply. Chart by Gail Tverberg.

The big picture is made even more complex by climate concern and a growing raft of energy policies in Europe and the USA designed to reduce CO2 emissions while singularly failing to do so meaningfully. And so at a time when clear engineering thinking was required on how to tackle the potential impacts on society of energy scarcity in the global economy we got instead ‘Green Thinking’. Future generations will look back on this era with bewilderment.

Against this backdrop, I will now move on to the main topic of this post which is the concept of broken markets and Hubbert’s peak. For those who do not know, Hubbert’s peak is peak oil by another name and while wise guys may want to invent a multitude of definitions I will stick to the simple definition of the month or year when global oil production reached a maximum volume or mass and thereafter went into inexorable decline. The impact of this on Mankind is normally expected to be negative since oil is the lifeblood of the global economy. The reason for this happening could be because we discovered something better than oil that substituted oil out of existence (that wouldn’t be bad) or because of scarcity oil became too expensive to produce (perhaps where we are now) or because Greens in government like Ed Davey and Barack Obama set out to undermine the fossil fuel industries which just a few years ago I would have found impossible to believe. We live in interesting times.

The world economy as we know it runs on fossil fuels and in particular a relatively small number of truly gigantic fossil fuel reserves such as the Ghawar oil field in Saudi Arabia, the Black Thunder coal field in Wyoming and the Groningen gas field in The Netherlands. Both Ghawar and Groningen are showing signs of age, along with the hundreds of other super giant fossil fuel deposits. The stored energy in these deposits flows out at enormous rate and at little financial or energy cost. It is these vast energy supplies and surpluses that provide the global economy with economic surplus. It is indeed the lifeblood. But the world has run out of these super giant deposits to exploit and we are finding it increasingly difficult to find large enough numbers of their smaller cousins to keep the wheels of the global economy well oiled

The focus has thus turned to low grade resource plays. The resource plays offer near infinite amounts of energy but require large amounts of effort to gather that energy. The ERoEI is lower than what went before, perhaps much lower, but for so long as the energy return is positive, we have indeed learned that Man’s inventiveness and commitment can exploit these resources. One of the main questions I want to pose here is, is it possible for these resource plays to participate in the global economic system as it has existed for many decades that has become known to us as capitalism?

The first example of broken energy markets I want to look at is wind power. Both onshore and in particular offshore wind are expensive forms of intermittent electricity. Wind advocates will argue that the intermittency does not matter and will point gleefully to the low electricity prices achieved when the wind blows strongly across Europe resulting in over-supply that dumps the price. Wait a minute though, high cost and low price is a toxic mix that does not jive with capitalism. The more wind resource installed on the system the greater the size the unusable surplus and economic penalty becomes.

Why have the wind producers not gone out of business? It’s because the markets are rigged such the wind producers are given priority to market and receive a guaranteed price. This is a monopoly! The consumers don’t benefit because they have to pay the guaranteed price to the wind monopoly. The losses end up in the hands of the traditional generators who see their prices dumped and need to chew on the losses whilst providing the invaluable balancing services for free.

Providing back up services for when the wind doesn’t blow is another problem newly addressed in the UK with the new “capacity market”. The government is calling this a ‘market’ while it is in fact a component part of the wind monopoly. Companies are being paid to maintain generating capacity on stand by to cover periods when the wind doesn’t blow. Again the consumer has to foot the bill. One day quite soon, UK and other European governments are going to have to explain to their electorates why they have distorted the electricity market so badly, delivering a monopoly to wind producers, destroying the traditional market participants with the bill being met by the consumer who receives zero benefits. This can only be explained if it is underlain by rampant corruption or sheer stupidity.

The second example of a broken energy market I want to explore is the US shale industry. This shares certain characteristics with the wind industry in that it is a high cost but potentially very large resource. But the mechanism for integration of this resource into the market is rather different. The problem with shale gas is that over-supply has resulted in the US gas price being dumped below the level where many shale operators can make a profit. Consumers in this case benefit through getting both secure and low priced gas. But the shale operators have reportedly racked up large losses that have been covered by expanding debt. These losses may yet come home to roost with the consumer if debt defaults result in a new credit crunch where the debts are socialised via government bailouts of the banking sector.

If it were possible to produce shale gas at $1 / million btus then everyone would be happy. Consumers would be getting secure and cheap energy and producers would be making handsome profits to distribute to shareholders. That is how capitalism is supposed to work. The system as it has operated seems broken.

US Light tight oil (LTO) production appears now to have created the same problem for the liquids plays where the entrance of expensive liquids in the market have contributed to the crash in the oil price. This has created risks for the LTO operators. It remains to be seen if the LTO sector sees mass insolvencies and default on loans that may socialise these losses. The introduction of high cost LTO has also undermined the whole of the higher cost component of the conventional oil sector. If LTO could be produced in large quantities for $20 / bbl then there would be no problem since this source would go on to substitute for the higher cost conventional sources of supply. But with costs closer to $60-$80 this is not going to happen. The conundrum for capitalism is the introduction of large quantities of higher cost energy to the system.

At this point I have to admit that nuclear power may be subject to similar limitations. It is difficult to view the Hinkley Point new nuclear build in the UK as a triumph for the consumer or the country. A better way to manage such enormous capital expenditure on vital infrastructure is via the state. The costs may eventually be socialised to the tax payer, but at least the energy is reliable and amongst the safest forms of power generation ever developed and the taxation system distributes costs in an equitable way.

A form of society could undoubtedly exist powered by nuclear, wind and shale gas. But it would be a society supported by the state with far larger numbers working in the energy industries than now, producing lower surpluses, the energy production part perhaps running at a perennial loss. Those losses have to be covered by either higher price or via the taxation system. Either way, the brave new world that awaits us will be characterised as the time of less that will be in stark contrast to the time of plenty many of us enjoyed during the 20th Century.