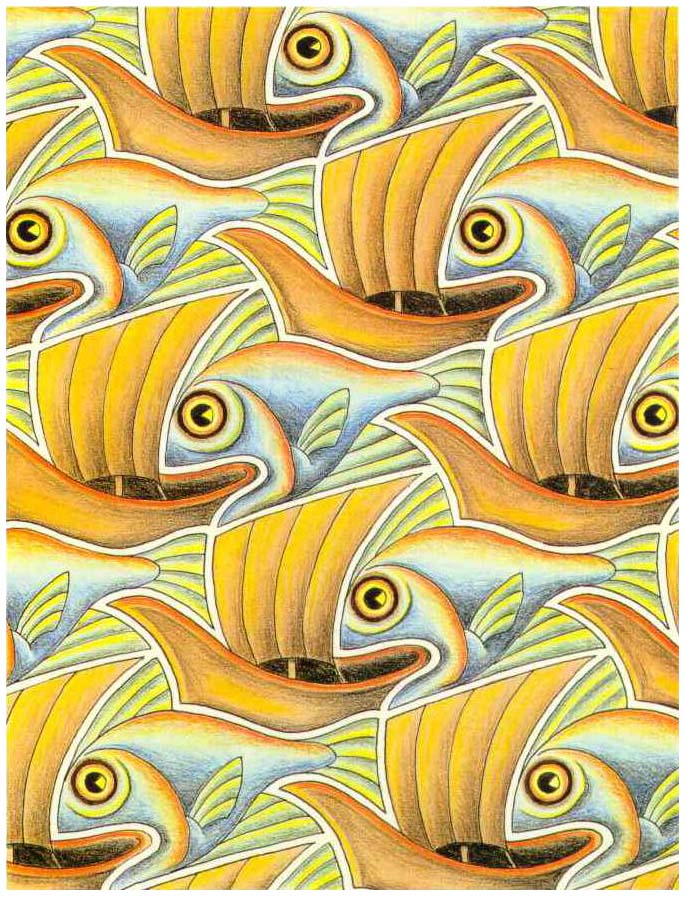 For the past 24 hours, I’ve been reading, and jotting down quotes, like an idiot, about the Nordstream pipes’ sabotage. Just trying to figure out what the hell happened. I doubt we will ever know who “killed Kennedy”, but we can try. I find it remarkable how eager certain parties are to blame Russia for blowing up its own infrastructure, how equally eager to discard alternative options, and most of all perhaps how eager “EU functionaries” are to claim they want a full investigation. Really? Even if your own allies did it?

Thinking that Russia blew up its own pipeline, while they could just close the tap, much easier and cheaper, appears to be very far fetched. In any Whodunnit you want some logic. First, my notes, from the past day, much from Twitter, plus some other sources, more or less in random order:

Note: it will take weeks, if not months, to just get started. Because all the gas will have to flow out first. The pipes were not active, but they were full of gas, over a very long distance. They were ready to go and supply Europe. Then when Germany suddenly reneged on the deal, where were they going to put the gas?

Laying (building) undersea pipelines is never an easy job, But the Baltic Sea adds a few extra problems, as per Lookout at the Saker :

The first step to building an offshore pipeline is to conduct extensive surveys of the seabed. In the case of NS2, this involved detailed seabed survey of areas potentially harmful to the building and operation of a pipeline. This was certainly the case for NS1 and NS2, especially in areas that were used to dump explosives and chemicals.

The Baltic Sea was the scene of maritime battles, laying of mines during WW2. Additionally, areas of it were used as a dumping ground for obsolete, damaged, or expired munitions & chemicals. This was widely carried out following the end of both world wars. “It is estimated that the Baltic Sea alone has around 50,000 tonnes of chemical munitions, 500,000 tonnes of conventional weapons, and 10,000 wrecks on its seabed.”

I loved this little bit:

That’s German politics on its last legs. Y’all, shut up!

Nordstream has never been uncontested. This is from November 2015, at pipeline-journal.net:

Ruling out sabotage, the Swedish military has successfully cleared a remote operated vehicle (drone) rigged with explosives found near Line 2 of the Nord Stream Natural Gas offshore pipeline system. The vehicle was discovered during a routine survey operation as part of the annual integrity assessment of the Nord Stream pipeline. Since it was within the Swedish Exclusive Economic Zone (EEZ) approximately 120 km away from the island of Gotland, the Swedes called on their armed forces to remove and ultimately disarm the object. “We don’t consider it to be dangerous to merchant vessels or the pipeline at this point,” Jesper Stolpe, Swedish Armed Forces spokesman, told Radio Sweden. According to Stolpe, the cable used to control the drone and to set off the explosive was cut off, so at the moment the vehicle is relatively harmless.

And more recently, there was activity in the area as well. Guess who…

• Apparently US 6th Fleet undersea explosives specialists were “scoping out” the situation back in June.

• An expeditionary detachment of US Navy ships led by the universal amphibious assault ship USS Kearsarge days ago was in the Baltic Sea. It was 30 km from the site of the alleged sabotage on the Nord Stream-1 gas pipeline and 50 km from the threads of Nord Stream-2 gas pipeline

• Tin Foil Hats: Russia and Germany were negotiating behind the scenes for gas, but a “3rd party caught on and put an end to it”.

• The Nordstream 2 pipeline allows Russia to send gas to Western Europe without paying transit fees to Ukraine and Poland. Russia just completed it in the teeth of massive opposition from Ukraine, Poland and USA. Now they are trying to convince you it was Russia who blew it up.

The mother of all coincidences:

• A former Polish defense minister has credited the United States with blowing up two Russian natural gas pipelines to Europe, Nord Stream 1 & 2, the day before Poland opened a major new pipeline from Norway. A new 900km pipeline “Baltic Pipe” will be opened today, a branch connecting from the Norway-Germany ‘“Europipe”. This branch bypasses Germany. That former Polish defense minister, Radek Sikorski, [now] Chairman of the European Parliament’s delegation for relations with the US, and married to WaPo’s Anne Applebaum, writes “Thank you, USA” • [..] looks like the pipeline attack wasn’t totally successful, as it failed to breach one of the NS2 lines – taking down only three of the four pipes. it will be interesting to see if there is any attempt to finish the job.

• Javier Blas, Bloomberg: The size of the Nord Stream pipeline gas leak is huge. According to the Danish armed forces, it measures about 1 kilometer in diameter. The smaller circle in the center is approximately 200 meters wide

• Each line of the pipeline consists of about 100,000 24-tonne concrete-weight coated steel pipes laid on the seabed. The pipelines have a constant internal diameter of 1.153m, according to Nord Stream. Sections lie at a depth of around 80-110m. 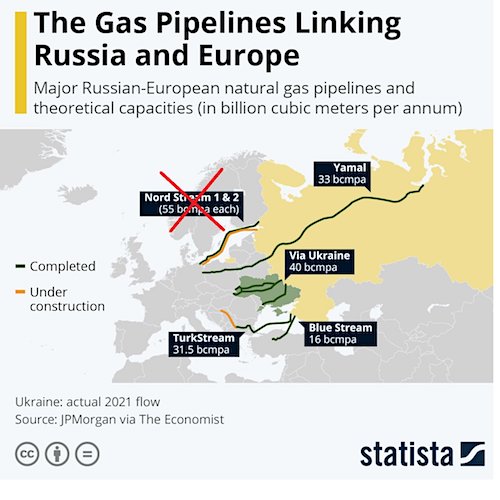 • The approximate locations of the leaks are in the Bornholm Basin area (mean depth of 43m), closest to the island. The depth is shallow enough for specialised diving operations as well as the use of Remotely Operated Vehicles, (as was the case for the construction of both pipelines). The shallow area of the Bornholm Strait separating the Arkona Basin from the Bornholm Basin has a maximum depth of 45 metres.

• The steel pipe itself has a wall of 4.1 centimeters (1.6 inches), and it’s coated with another 6-11 cm of steel-reinforced concrete. Each section of the pipe weighs 11 tonnes, which goes to 24-25 tonnes after the concrete is applied.

• Assessment is that the second, bigger explosion corresponded to more than 100 kilos of dynamite.

This gives us at least some idea. That Russia would kill its own $11 billion 10-year hard-fought investment makes little sense. Not impossible, but very unlikely. The US, however…

We have Biden in February this year:

Pres. Biden: "If Russia invades…then there will be no longer a Nord Stream 2. We will bring an end to it."

Reporter: "But how will you do that, exactly, since…the project is in Germany's control?"

Biden: "I promise you, we will be able to do that." https://t.co/uruQ4F4zM9 pic.twitter.com/4ksDaaU0YC

And Victoria Nuland just before that:

.@UnderSecStateP Victoria Nuland: “If Russia invades Ukraine, one way or another, Nord Stream 2 will not move forward.” pic.twitter.com/hEGBrx6HJj

I’m sure the Americans had a role in it. But that’s not the same as saying they were the direct perpetrators. There are still other candidates. Let’s rule out Russia, unless someone comes with a good explanation for why they would have acted against their own interest -or the semblance of it.

Germany is another party to this. But they are suffering already, and may indeed have held secret talks with Russia about gas deliveries. Now, they can forget about that for a long time to come. There are voices saying today that the pipelines are damaged beyond repair. I’m not sure that’s true, maybe they can replace one damaged pipe segment with a non-damaged one, but it would certainly take a lot of time and money.

So we strike off Russia and Germany, and keep the US in the back of our heads. That leaves two very obvious parties. First, the Ukraine, which loves not having to compete with Nordstream. But as far as we know, Kiev doesn’t have the equipment and/or capability to blow up a pipeline 100 meters under water. They could have asked the US, though, true enough. That leaves one country that no-one is talking about, but is in the thick of it all: Poland.

The Poles stand to profit in two different ways from the explosions (and unlike Ukraine, they have the equipment to make it happen). First, there is a pipeline from Russia to Germany that runs through Poland, and for which they can now demand a user fee if any gas would flow. Second, they just opened the Norway-Poland branch of the Norway-Germany “Europipe” yesterday, which is labeled the Baltic Pipe.

Poland can make a killing off of the situation. There’s no way they could pull it off without the US knowing about it, but that can be arranged.

This all still leaves me with a few questions. As I knew it would. For the same reason I don’t know who killed Kennedy. First, why did the CIA warn of an attack on Nordstream weeks in advance? 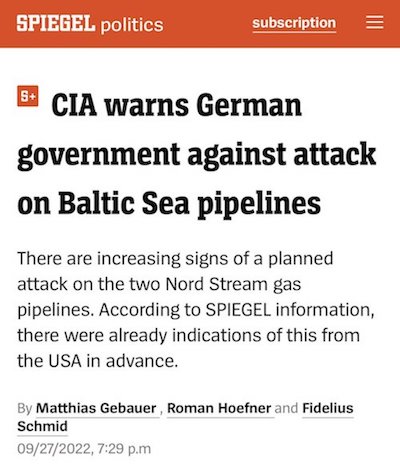 And second, why are people like Von der Leyen, Borrell etc. clamoring so loudly for a thorough investigation when the Whodunnit logic says it may well point to one of their allies? Do they know something they’re not telling, do they think they can suppress whatever comes out? To be continued.